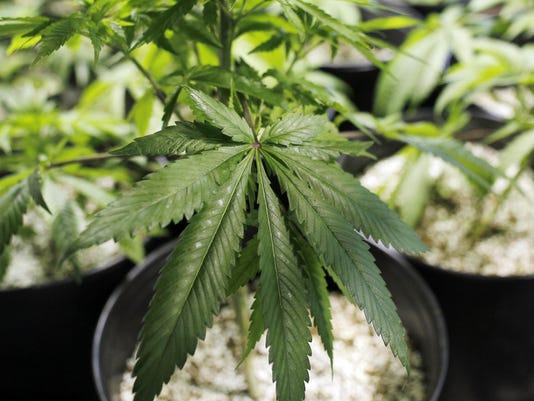 In this July 24, 2017 photo, marijuana plants are seen at a laboratory.(Photo: Ricardo Arduengo / AP)

Mackinac Island – Republican leaders in the Michigan House and Senate are at odds over a push to adopt and amend a marijuana legalization initiative, setting up a high-stakes showdown ahead of a Tuesday deadline for legislative action.

Senate Majority Leader Arlan Meekhof, R-West Olive, said Thursday he has the votes to adopt the measure in the upper chamber and argued it would be a “failure of leadership” if House Speaker Tom Leonard does not follow suit.

But Leonard, a DeWitt Republican running for attorney general, has made clear he personally opposes legalization and said it would take a “marijuana miracle” by supporters for the House to approve the measure next week.

“I’m speaker of the House. I’m not dictator of the House,” Leonard told The Detroit News at the annual Mackinac Policy Conference. “If the votes are there, I’ll put it up, but I don’t see there being support.”

As The Detroit News recently reported, there is growing support in the House GOP caucus to adopt the initiative and amend it before it is implemented. But the lower chamber is unlikely to secure the 55 votes needed for passage without support from some Democrats, whose caucus leaders want voters to decide the issue on the November ballot, where it could drive liberal turnout.

At least one House Democrat is defying marching orders and said Thursday he is willing to talk to Republicans about adopting and amending the marijuana proposal and "possibly" has already done so.

Peterson, who is African American, said drugs have had a large impact on communities of color and wants legislators to have a say on how an estimated $300 million in projected marijuana tax revenue is divided.

The initiative calls for lawmakers to spend the revenue on  schools, road repairs and local cities and counties that allow marijuana facilities. But Republicans have floated the idea of amending the proposal to instead redirect some revenue to pay for an income tax cut, which could help secure GOP votes.

Peterson said he would prefer that a portion of the revenue be used to boost state spending on substance abuse treatment, public and mental health services, senior services and community college access.

“People will be affected, so they should receive services in return,” Peterson said. “There is a time for politics, but it’s important once you’re elected to govern. And I believe there’s still time for governing to take place.”

If the Legislature does not act on the pot legalization initiative by Tuesday, the proposal from the Coalition to Regulate Marijuana Like Alcohol would instead go to the November ballot.

The Senate scheduled a rare Monday session for potential action on the marijuana proposal, but Leonard did not add the extra House day, so Meekhof said he plans to cancel the session and instead push for a vote the following day.

House Minority Leader Sam Singh, D-East Lansing, has warned of a potential Republican "bait and switch" and said earlier Thursday that business interests have been ramping up lobbying efforts in Lansing.

“It’s very clear from the buzz that there are a handful of big Republican donors that want to make sure that this gets done,” Singh said. “My sense is they want to get a monopoly from the legislature, and that’s what’s motivating some of this.”

Republicans advocating for legislative action say adopting the measure now would make it easier to amend. If approved by voters, changing the law would require ¾ super majorities in the House and Senate rather than a simple majority.

“I have conflicts in my own mind, but as I look at this proposal, I think it’s terribly written,” said Rep. Lee Chatfield, R-Levering, who is leading adopt and amend efforts in the House as Leonard sits on the sidelines.

“The conversation is going to continue,” Chatfield said. “There’s good people on both sides of the issue and I think when we’re discussing marijuana we have to ask ourselves what’s the best way to keep our communities safe, our kids safe and certainly when you’re talking about recreational marijuana there’s going to be some passionate opinions.”

Meekhof said he wants to amend the recreational marijuana initiative, sent to the legislature by petition drive, to explicitly mirror the state’s new medical pot licensing law. Doing so would eliminate a home growing option from the measure and require local communities to “opt in” to recreational marijuana sales rather than just allowing them to opt out.

“I represent one of the most conservative parts of the state, and I’ve been explaining it to my judges, police officers and clergy what the opportunities are and what the dangers are,” Meekhof said. “And all of them have said, without exception, ‘You need to control this. You need to adopt and amend it.’”

Meekhof guaranteed the Senate will not attempt to delay marijuana legalization unless or until the federal government reclassifies the drug, dismissing a potential option floated last week by Sen. Mike Shirkey, R-Clarklake.

Senate Minority leader Jim Ananich, D-Flint, said Shirkey’s comments scared away any Democrats who might have been considering cooperation and questioned the motives of special interest groups now urging passage.

“It’s funny that some of the people who are pushing this the most probably 10 years ago wanted to put my constituents in jail for having a dime bag,” he said.

Like many Democrats, Ananich supports legalization but wants voters to decide the marijuana proposal in November. He said Democrats will be willing to work with Republicans next year on bipartisan amendments if voters approve the plan.

Republican leaders are expected to continue negotiations at the Mackinac Policy Conference and throughout the weekend.

“One of the themes of the convention is restoring trust,” Ananich noted. “It’s ironic they’re trying to do the exact opposite of that while we’re here.”