Calls mount for Engler to step down at MSU

Calls mount for Engler to step down at MSU 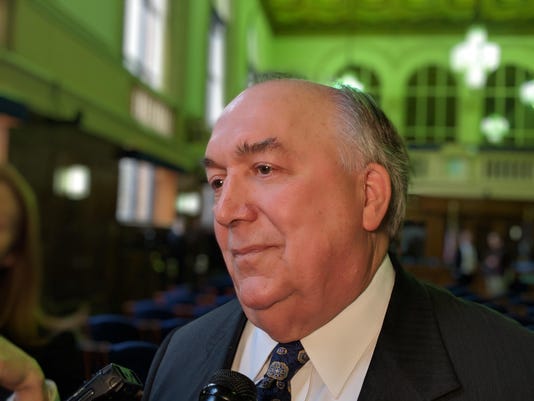 Calls mounted Thursday for interim President John Engler to resign from Michigan State University in the wake of emails in which he suggested that the first gymnast to publicly accuse Larry Nassar of sexual abuse might get a "kickback" from her attorney for "manipulating" other victims.

The comments seeking Engler's resignation came from a U.S. senator, two state lawmakers, a candidate for MSU trustee and a lawyers' association.

The private email from Engler, which emerged Wednesday, prompted outrage at MSU and led two board members to call his comments unacceptable.

Senate Judiciary Committee Chairman Rick Jones, R-Grand Ledge, and Sen. Margaret O'Brien, R-Portage — who played major roles in passage of more than two dozen bills inspired by the Nassar case — said Engler is fanning the fires spawned by the scandal and should step down.

"I'm very unhappy that Mr. Engler has not gone in the right direction to stop the culture of silence and to bring healing to the MSU community," Jones said.

He added that he suspects the MSU trustees hired Engler because they thought he might be able to control Michigan's Republican-led Legislature.

"He soon found he is no longer governor, and he cannot control us," Jones said. "We passed good legislation to break the culture of silence we have at many universities, colleges, high schools and other areas."

Under the package of bills, signed into law Tuesday, childhood sexual assault victims will have longer to press charges or file suit.

O'Brien said it was clear that Engler felt Rachael Denhollander was stirring up the hundreds of other victims who spoke out against Nassar, a sports doctor who sexually assaulted girls and women under the guise of medical treatment over two decades while employed at MSU.

O'Brien said Engler's statements, which also criticized lawyers for the victims -- including Denhollander's attorney, John Manly -- minimized the experience of so many young women and girls.

Teri Lyn Bernero, a Democrat who is running for a seat on the Board of Trustees, wrote an open letter to the board calling Engler’s comments “vile and cruel and unbecoming of any MSU official, particularly its leader.”

"In light of his previous attempts to silence survivors at MSU Board meetings and his inappropriate remarks in private conversations reported by survivors, this latest revelation clearly establishes a pattern of Engler’s unacceptable conduct and utter contempt for the survivors and their allies," Bernero wrote.

"Mr. Engler’s abhorrent remarks are the last straw for me and for many people who love MSU and want to see the university move forward with real institutional and cultural reforms that protect students and create a safe environment for learning," she continued.

University officials did not directly address the calls for Engler's resignation, instead focusing on his accomplishments during his four-month tenure, including a $500 million settlement reached last month with Nassar victims.

"Interim President Engler is pleased with some of the accomplishments in his first few months, including the improvements in medical care and youth program policies and the settlement agreement reached," MSU spokeswoman Emily Guerrant wrote in an email Thursday.

"But there is still more work to be done to improve sexual assault prevention and support services on campus, and that is what he is focused on during his remaining time at MSU," she added. "He is committed to making the university a safe, inclusive campus where students, faculty and staff can focus on education, research and their own successes."

Engler posted Thursday on Twitter that two new members, Mary Ann Ferguson and Tom Fritz, were added to the university's Relationship Violence and Sexual Misconduct Expert Advisory Workgroup.  Established by Engler, the workgroup is a panel of several MSU community leaders with expertise in sexual assault working on improving MSU policy and programs. Since February, it has received 180 suggestions.

Engler, who took over at MSU in February after former President Lou Anna K. Simon resigned, wrote the emails shortly after Kaylee Lorincz accused Engler of secretly trying to settle her civil suit against the school for $250,000 without her attorney present.

"The survivors now are being manipulated by trial lawyers who in the end will each get millions of dollars more than any of (sic) individual survivors with the exception of Denhollander who is likely to get (sic) kickback from Manley (sic) for her role in the trial lawyer manipulation," Engler wrote.

Most MSU trustees could not be reached for comment in the wake of the email uproar. But Trustees Brian Mosallam and Dianne Byrum said they were stunned and Engler should apologize.

But the head of the Michigan Association for Justice, a group of plaintiffs' lawyers, joined the growing chorus of those saying that Engler should step down.

"John Engler’s crass personal attack on Rachael Denhollander is detestable and a betrayal of all the survivors, and he should resign immediately," President Debra A. Freid said. "We support Rachael and every survivor, each of whom was strong enough to come forward in the face of years of Nassar’s abuse while Michigan State University looked the other way.”

Denhollander expressed her gratitude for those willing "to stand up for what is right."

"It is always the most difficult to speak up when the person participating in an abusive culture is part of one's own community, when it would cost to do the right thing," Denhollander said. "But that is what leadership truly is, and we could use a lot more of it in Michigan, especially at MSU."