A proposal that would change the way that Michigan draws political boundaries is headed to the November ballot. 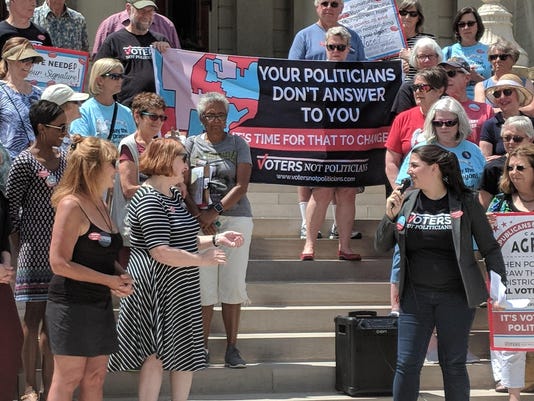 Katie Fahey of Voters Not Politicians speaks to supporters at the Michigan Capitol on May 24, 2018.(Photo: Jonathan Oosting)

Lansing — A proposal that would change the way that Michigan draws political boundaries is headed to the November ballot.

The Board of State Canvassers on Wednesday approved the ballot initiative, which contained more than 425,000 signatures gathered by Voters Not Politicians.

The 3-0 approval was met with cheers and a standing ovation from a large group of supporters gathered at the Lansing Center for the meeting. Democratic board member Julie Matuzak was absent.

Voters Not Politicians Executive Director Katie Fahey thanked the board “for making sure that our democracy can be representative” and thanked supporters.

“From Day One, the heart, brain, and soul of our organization has been thousands of Michiganders who said, 'I’m tired of not being involved in democracy; I’m going to step up and get involved,'” Fahey said.  “This is just a small sampling of some of those people who were able to be part of the petition process.”

The proposal would create an independent redistricting commission that would redraw congressional and legislative maps every 10 years. Currently, the task is left up to lawmakers.

The Michigan Supreme Court last week denied a request by Citizens Protecting Michigan’s Constitution to delay a Court of Appeals ruling that directed canvassers to certify petitions, but justices have not yet decided whether to take up the case on appeal.

Attorneys for the opposition group, funded in part by the Michigan Chamber of Commerce, argue the redistricting proposal amounts to a wholesale rewrite of the state Constitution rather than a simple amendment fit for the ballot.

A three-judge Court of Appeals panel unanimously rejected their arguments, calling them “without merit.” But opposition attorneys are asking the Supreme Court to reconsider the case by September 6, the statutory deadline for state certification. Voters Not Politicians is asking for a faster ruling by the end of July.

Opponents said they look forward to making their arguments before the state Supreme Court, according to a Wednesday statement from Citizens Protecting Michigan's Constitution.

"The action of the Michigan Board of Canvassers is a step in the process but not the end of the process," the group said.

Board of Canvassers certification does not resolve the legal dispute but gives organizers a ballot proposal number they could use in campaign materials and allow the Bureau of Elections to begin crafting a 100-word summary for the ballot.

Fahey said she is confident the Supreme Court would rule in favor of Voters Not Politicians.

“We look forward to being on the ballot in November, and giving voters a chance to change our current system, where politicians and lobbyists operate behind closed doors to draw district lines for partisan gain," Fahey said in a statement.