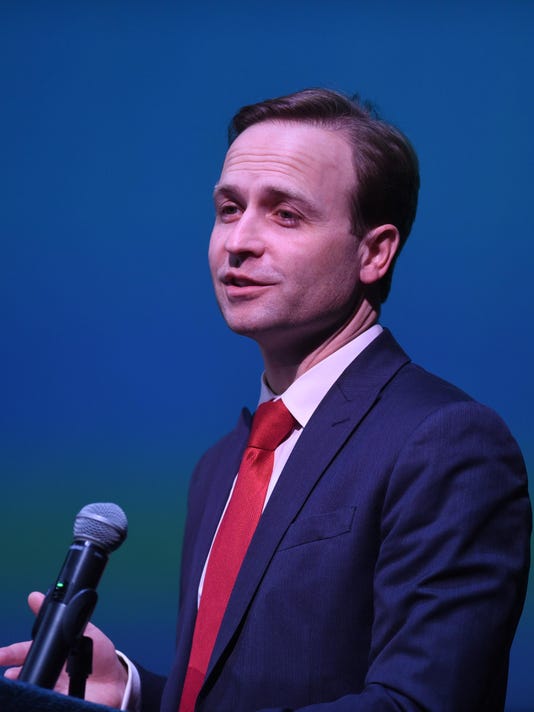 The chamber’s political action committee announced its endorsements Thursday. The influential Detroit business group did not endorse either of the Republican businessmen competing in a primary to take on Stabenow, a third-term Democrat.

The endorsement is a notable pickup for Calley, the lieutenant governor from Portland who is locked in a bitter GOP primary battle against Attorney General Bill Schuette of Midland.  The powerful Michigan Chamber of Commerce is backing Schuette, but the Grand Rapids and now Detroit chambers are backing Calley.

Calley is “in the best position to carry on the legacy and continuity of Gov. Rick Snyder,” Brad Williams, the Detroit chamber’s vice president of government relations, said in a statement.  “He has been a leader on causes that matter to business such as Detroit’s municipal bankruptcy and properly funding our dreadful roads.”

Whitmer, the former Senate minority leader from East Lansing, “has a proven track record of convening leaders to solve tough problems for Michigan communities,” said Hank Cooney, chairman of the chamber's PAC board.

In endorsing Stabenow for re-election, Williams called the third-term Democrat “a tremendous champion for Michigan in Congress” and noted her support for the Gordie Howe International Bridge project, small businesses and agriculture.

Two Metro Detroit businessmen — John James of Farmington Hills and Sandy Pensler of Grosse Pointe — are competing in the GOP primary to take on Stabenow. But the chamber is not supporting either candidate.

Calley and Schuette sparred over tax policy Thursday before and after a bipartisan candidate forum hosted by the Small Business Association of Michigan.

Calley defended his work on the Michigan Business Tax as a state legislator in 2007, saying he had the “courage to engage” with former Gov. Jennifer Granholm, a Democrat, to improve the legislation by exempting 171,000 small businesses.

Schuette has attacked Calley for voting to create the MBT, which Snyder replaced in 2011 with a 6 percent corporate income tax, and has run ads with footage of Granholm praising his role in the legislation.

“It certainly rocks and shocks the conscience of Republicans, and the fact is that he supported Granholm tax increases,” Schuette said. “That was a bad law, and you don’t pass bad laws, period.”

But Calley accused Schuette of using “unethical” half-truths to score political points, noting the Small Business Association of Michigan named him freshman legislator of the year for his work on the MBT.

Schuette is “pretty much 100 percent negative 100 percent of the time. That’s just how he is,” Calley said after the forum. The “work is being taken out of context and used in a political campaign, and that’s just how the world works, but that doesn’t make it ethical.”

Michigan’s 2018 primary is set for Aug. 7. State Sen. Pat Colbeck of Canton Township and Saginaw obstetrician Jim Hines are also seeking the GOP gubernatorial nomination, but Schuette and Calley are the leading contenders to make the general election.

Calley rolled out a new no-fault auto insurance reform plan Thursday, rejecting an “all or nothing” approach to lowering sky-high costs in favor of targeted changes. He was joined by Oakland County Executive L. Brooks Patterson, who has endorsed Schuette in the GOP primary.

The lieutenant governor joined calls to create a fraud authority and bring transparency to the Michigan Catastrophic Claims Association, which assesses an annual fee to reimburse insurers for no-fault claims that cost more than $555,000.

But Calley did not propose any caps on medical care for injured motorists or giving motorists the option to buy plans with reduced coverage, ideas that Patterson has fought for years both publicly and through his allies in the state Legislature.

Unlimited lifetime medical benefits now required under Michigan law have helped create “the best emergency and long-term care system for traumatic brain injuries in America,” Calley said in a position paper he expects to include in an upcoming book.

“We must engage in meaningful conversation that offers creative ideas for reducing the cost of auto insurance without increasing our risk of reduced care or increasing the legal liability for Michigan drivers,” Calley wrote.

Schuette has said he wants to stop auto insurance fraud, crack down on “frivolous lawsuits” and “get people more options and choices.” But he has repeatedly declined to say whether he thinks those choices should include the ability to purchase plans that cap insurer liability for long-term medical care.

“The fact is we haven’t gotten anything done in the last eight years,” Schuette said Thursday, knocking inaction under Snyder and Calley.