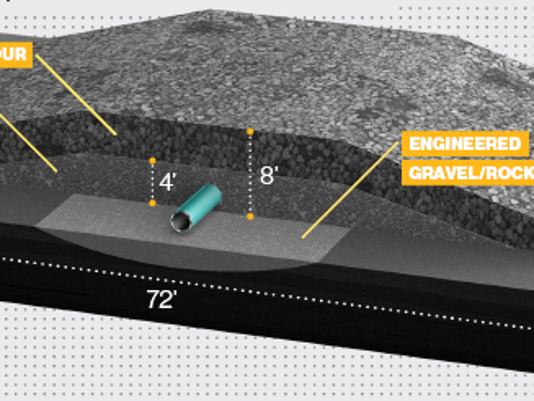 Lansing — Covering the dual Line 5 pipelines beneath the Straits of Mackinac with rocks and gravel while installing a new boat communications system could reduce the chances of an anchor strike causing an oil leak by 99.9 percent, Enbridge told Michigan officials Friday.

The Canadian energy company submitted a series of reports to the state required under a November agreement designed to explore the long-term fate of the 65-year-old pipeline, which carries up to 540,000 barrels a day of light crude oil and natural gas liquids through the Upper Peninsula and lower Michigan from Wisconsin to Ontario.

Republican Gov. Rick Snyder has already indicated he wants Enbridge to move Line 5 into a new tunnel beneath the Straits of Mackinac, a possibility the company called “feasible” in an earlier report. Environmental groups have called for immediate shutdown of Line 5, which was dented by an anchor strike in early April that also ruptured underwater transmissions cables.

Snyder issued an emergency no-anchor rule for the straits on May 24, but an Enbridge report filed to the state Friday explored other ways to mitigate the risk of a strike that could cause a discharge in the fresh waters connecting Lake Michigan and Lake Huron.

The company assessed 15 protective barrier options and determined that covering the two 20-inch diameter pipelines that run along the lakebed with at least six feet of gravel and rock would prevent anchor penetration and dragging, reducing the risk of a spill-causing strike.

It would cost approximately $150 million and take up to three years to plan and build the protective cover, Enbridge said. The company said implementing a “Guardian: protect” system that would warn vessels of hazards and an advisory message to check that anchors are stowed would all but eliminate risk of a strike.

Enbirdge is not advocating any particular action for Line 5 but wants the pipeline or a feasible alternative to remain operational.

The reports should “help inform discussion on the future of Line 5 and energy infrastructure in Michigan,” said company spokesman Michael Barnes. “It’s up to the state to take these assessments and reports and decide what it wants to do. We’re working with them.”

The state is expected to decide next steps for Line 5 by this fall, said Nick Assendelft, a spokesman for the Michigan Agency for Energy.

“It’s important we keep the pipeline safe and keep the Straits clean and do what we can to mitigate any possibilities,” he said. “I think we’ll sit and take a look at all these (Enbridge assessments) and see which are appropriate and what the timing is.”

While much of the Line 5 focus has been on the Straits, the state also required Enbridge to identify other bodies of water the pipeline crosses. A state technical team identified nearly 400 crossings. Enbridge is proposing new steps to prevent leaks at 74 priority crossings, including sites on the Little Sturgeon River, Kawkawlin River in the Saginaw Bay region and the Pine River in the St. Clair area.

For the Straits, Enbridge reviewed three possible leak detection systems that could be implemented.

Of the three, the company said installing distributed acoustic sensing cables could provide the most effective form of leak detection, but the technology is not “operationally proven.” The cables would be difficult to deploy but feasible to operate and maintain, Enbridge said.

Two other options, a fixed optical camera or fluorescent leak detector, would be impractical to deploy and provide only a low level of effectiveness, according to company findings.

As directed by the state, Enbridge also reviewed nine technologies that could be used to evaluate the condition of protective coating on the two 20-inch diameter pipelines that run along the bottom of the Straits.

Of the nine, only a technology called “cathodic protection close interval survey” is fit for use on an offshore, underwater pipeline, the company said.

Enbridge told the state it plans to use the cathodic survey approach to assess Line 5 coating later this year, calling it “the most reliable combination of technologies for managing any potential external corrosion threat.”

The Michigan Environmental Council criticized the Enbridge reports, arguing they "do not alleviate the ever-growing threat of a spill in the Straits of Mackinac as a result of Line 5." The assessments "reaffirm the fact that the State of Michigan should immediately begin legal proceedings against Enbridge to terminate the easement that allows for a pipeline in the Straits of Mackinac," the council said.

Environmental activists have long called for a Line 5 shutdown, warning an accident like Enbridge’s massive 2010 inland Kalamazoo River oil spill could devastate the Great Lakes. But state and industry officials have warned that a complete shutdown would cut off a supply of propane that many Upper Peninsula residents rely on for heat.

As of June 2016, about 55 percent of Michigan’s propane demand and 65 percent of Upper Peninsula demand was met through the pipeline, according to Enbridge. The company says that about 30 percent of the light crude oil carried by Line 5 stays in the region and is delivered to refineries in Toledo and Detroit.

Delivering the reports shows that Enbridge “shares a commitment with the state of Michigan to protecting natural resources while at the same time ensuring there is a safe and reliable option that still meets the energy needs of the state,” Barnes said.