'Portrait of survival': Those abused by Nassar honored at ESPYs 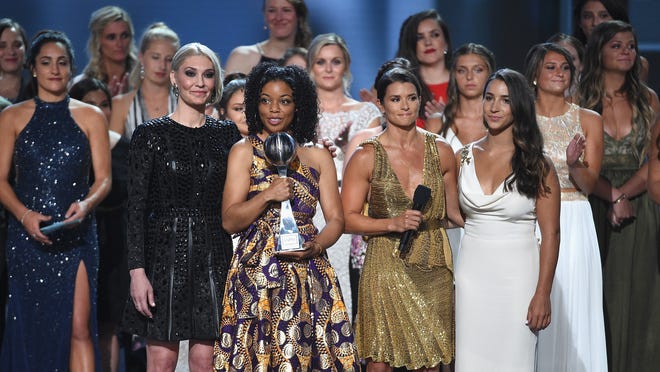 In a dramatic walk to the stage, 140 women and girls, including Olympic gold medalist Aly Raisman, assembled to a standing ovation and the song "I Can't Keep Quiet" by MILCK.

Nassar was sentenced in February to up to 125 years in prison after 204 testimonies in nine days in Ingham and Eaton counties by women and girls who said he abused them under the guise of treatment for sports injuries.

Actor Jennifer Garner presented the award saying, "We have to hear (their stories) for one, to make sure what happened at Michigan State University and USA Gymnastics never happens again, but we also have to hear it because the massive chorus of voices that have emerged from incredible darkness over the last year and are demanding it with poise, unimaginable strength and unbelievable courage."

The award, named after tennis great Ashe — who died of AIDS in 1993 — was given out during the ESPN's 25th annual awards gala, the ESPY's, in Los Angeles.

A 10-minute short film with a montage of photos of the girls and featuring athletes such as Tiffany Thomas Lopez, Jamie Dantzscher, Amanda Thomashow, Jeanette Antolin and others before they walked on stage.

"Speaking up and speaking out is not easy; telling our stories of abuse over and over again in graphic detail is not easy," said Sarah Klein, the first gymnast known to have been assault by Nassar. "... It's grueling and it's painful, but it is time ... If one more victim of sexual abuse feels less alone tonight, then our suffering has meaning."

Raisman, the captain of the 2016 "Final Five" U.S. women's Olympic gymnastics team, stood beside Klein and Lopez in accepting the award.

She thanked Judge Rosemarie Aquilina, who was in the audience with the woman who prosecuted Nassar, Angela Povilaitis.

Rachael Denhollander was the first victim to speak publicly about Nassar’s abuse. The former gymnast was one of more than 200 victims who spoke at Nassar’s sentencing earlier this year — a stunning and gripping seven-day procession that was at the forefront of the #MeToo movement.

Denhollander, who was unable to attend because of the impending birth of her fourth child, wished the women well and said she stood with them.

"It’s an incredible honor, but means so much more because my hope is that it signals a cultural shift in how abuse survivors are treated and viewed," Denhollander told The Detroit News. "I am constantly aware that behind myself and each Sister Survivor are hundreds of other survivors who still have no voice and do not have the support or army behind them. We remember them, and stand for them, tonight too."

This is the seventh time the Arthur Ashe Award was presented to multiple recipients. The first time was in 2002, to four athletes who died aboard United Airlines Flight 93,  which crashed in Pennsylvania after passengers fought the Sept. 11, 2011, hijackers.

In May, Michigan State University and lawyers for more than 300 victims reached a $500-million settlement in the abuse case.

In its release, ESPN cited the victims’ “undisputed bravery” in speaking out about the decades of abuse at the hands of a once highly acclaimed doctor, saying the “strength and resolve these individuals have shown in speaking out has brought the darkness of sexual abuse into the light and inspired many others to speak up about their own experiences.”