The American Civil Liberties Union of Michigan poured more than $1 million into a ballot committee pushing for increased voting rights. 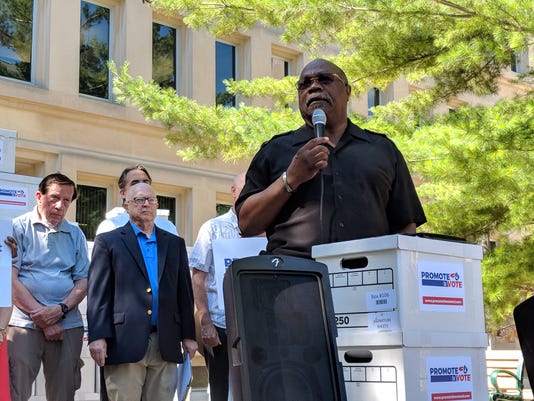 Rev. Wendell Anthony of the Detroit NAACP speaks at a Promote the Vote event in Lansing.(Photo: Jonathan Oosting)

The American Civil Liberties Union poured more than a million dollars into a ballot committee pushing for increased voting rights.

Promote the Vote received about $1.5 million in contributions in the second quarter, with roughly $1.25 million of the total coming from the ACLU, according to a campaign finance report filed Wednesday. The committee also received about $150,000 from the United Auto Workers union.

The contributions come as the ballot proposal waits whether state elections officials approve the initiative's eligibility for the November ballot. The proposed constitutional amendment would allow no-reason absentee voting by mail, registration to vote up to and on election day and guarantee continued straight-party voting.

The group submitted more than 430,000 signatures to the state on July 9.

Other large committee contributions in the second quarter include those made to committees pushing for a higher minimum wage, paid sick leave and an independent redistricting commission.

The ballot initiative would allow employees to earn an hour of paid sick leave for every 30 hours worked.

Voters Not Politicians raised roughly $373,000 in the second quarter, including $100,000 from a UAW group and $250,000 from the Action Now Initiative, a political advocacy group funded by hedge fund manager John Arnold.

Both Michigan Opportunity and Small Business for Better Michigan have challenged the eligibility of the minimum wage and paid sick leave ballot proposals. The Board of State Canvassers is expected to rule Thursday on the proposals.