Democrat Andy Levin has run into a harder-than-expected battle in his bid to succeed his father U.S. Rep. Sander Levin in Congress.

The 57-year-old Levin of Bloomfield Township has received the backing of high-powered unions such as the United Auto Workers and many party establishment officials, including his dad and uncle, former U.S. Sen. Carl Levin, D-Detroit. But he is facing a well-financed challenge from former state Rep. Ellen Lipton of Huntington Woods in the three-candidate Democratic primary.

Like other areas of the country, the fight in the Democrat-leaning 9th Congressional District is revolving around who is the most "progressive" or left-leaning candidate to represent parts of Oakland and Macomb counties in the age of President Donald Trump. Lipton, a 51-year-old patent lawyer who is endorsed by Democratic abortion rights group Emily's List, has raised about $1.09 million to Levin's about $901,000.

"You have a leaning toward progressives and newcomers" among candidates, said David Dulio, who chairs the political science department at Oakland University. "That's why we are seeing challengers to Levin, whose name would have likely been enough to carry him in the recent past.

"But Lipton's ability to raise money — it speaks to the 'year of the women' narrative."

Martin Brook, a labor and employment law attorney from Bloomfield Township and former Bloomfield Hills school board member, is complicating the race. He has raised about $35,000, according to campaign filings.

"You have another candidate who is likely a long shot to win, but the impact is that it's drawing candidates to the left," Dulio said.

Trump carried Michigan in 2016 by a slim margin and defeated Democratic presidential nominee Hillary Clinton by 12 percentage points in Macomb County by campaigning against trade deals that he said cost Americans their jobs. Two years ago, Democrats weren't "the obvious choice of the working class," said Levin, who voted for Clinton in the Michigan primary and general elections. 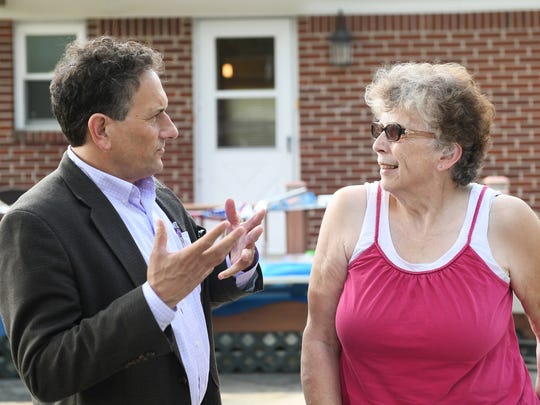 Candidate Andy Levin talks with voters including Betty Crawford of St. Clair Shores, right, at a meet and greet in St. Clair Shores. Levin is running for Congress in the 9th District, a seat now held by his father, Sander Levin. (Photo: Robin Buckson, The Detroit News)

The deregulation of industries, trade deals such as the North American Free Trade Agreement, and the federal bailouts of banks during the Great Recession that didn't save people's homes have alienated voters from the Democratic Party, he said.

"The Democratic Party in 2016 to the average person — what did it look like? We had two generations of people whose standard of living is worse than their parents'," he said.

Levin has criticized Trump for impulsively slapping a 25 percent tariff on some foreign-made steel and a 10 percent levy on aluminum. But he also condemns elected officials who "overlook American workers' justifiable frustration over the series of bad trade deals and economic policies pursued by China and others that led to Trump’s tariff action."

Lipton is less specific, arguing that she would "support international trade policies that prioritize the American worker" and "oppose any law that makes it easier for powerful corporations to take jobs away from and drive down wages for hardworking Americans."

Race to the left

Levin has embraced U.S. Sen. Bernie Sanders' Medicare-for-all plan as a way to extend health care coverage to all Americans. His television ads have highlighted paying bills to help treat Crohn's disease of two of his children, including one for $18,000 that is a reminder of the importance of having affordable health care.

The Urban Institute and Mercatus Center at George Mason University have estimated the plan by Sanders, a democratic socialist who defeated Clinton in Michigan's 2016 Democratic primary, would cost about $32 trillion over a decade.

Levin, the former head of the Michigan Department of Energy, Labor and Economic Growth and the founder of two clean energy companies, also supports expanding Social Security. The Social Security trust fund is estimated to be depleted by 2034, according to the latest trustees' report.

Lipton also has campaigned on Medicare for all but also has railed against the charter school movement championed by Betsy DeVos, the Grand Rapids billionaire and current U.S. education secretary. She was a critic of charter schools when she served three terms in the state House until 2014.

Levin also has criticized DeVos as he has promised to bolster public education.

Lipton has said she has had a form of multiple sclerosis since age 27 and has been fortunate enough to have health insurance that paid for her medication. But her experience with multiple sclerosis  — a disease of the central nervous system that disrupts the flow of information between the brain and body — has taught her that health care is "too important a right to be left to chance or luck."

Lipton supported Sanders in the Michigan primary and Clinton in the general election.

"There's been a sea change in what people are willing to envision," Lipton said.

"I see a lot more anxiety this time over issues that people thought have been asked and answered," she said, citing reproductive freedom, health care and rising corporate influence in politics.

The election of Trump and the trouncing of Democrats in congressional races of late motivated Brook to run.

"This last election was such a complete disaster. I don't believe the current paradigm within my party is working anymore," Brook said. "If we want to get out of the wilderness, it's not going to be with the same people got us there."

Levin and Lipton said voters often bring up the issue of fixing Michigan's crumbling roads and bridges. They argue that the state's $1.2 billion phased-in aid package isn't working quickly enough to deal with the infrastructure problems.

Levin talks about identifying particular needs, including a major lock at the Sault Ste. Marie locks in the Upper Peninsula. "Let’s identify whatever mix of taxes, bonds and notes are needed to pay for rebuilding our country in the most efficient and cost-effective way," he said on his campaign website.

Brook said he wants to fund the repair of the Soo Locks and build "an impenetrable barrier keeping Asian Carp out of the Great Lakes" in an effort to "protect Michigan’s economy and future."

The district includes Ferndale, Oak Park, Royal Oak, Hazel Park, St.Clair Shores, Warren, Bloomfield, and Sterling Heights. There are more district voters in the Oakland County area of the district, which voted for Clinton in 2016, than than there in the Macomb County area. But the Democratic candidates each said the influence of Trump shouldn't be overlooked.

"I think there were enough Democrats who voted for Trump in this district that enabled him to win Macomb County," said Levin, who attended a recent meet-the-candidate barbecue at the St. Clair Shores home of a supporter. Some attendees talked about how Trump has divided their families to the point that they no longer talk to some of their relatives.

Before his stints in government and clean energy, Levin was a union organizer. He has been endorsed by more than a dozen regional and national unions, including the AFL-CIO and AFSCME.

While Levin has contributed $75 of his own money to his campaign, Lipton has loaned herself nearly $300,000.

The primary winner will face Republican Candius Stearns of Sterling Heights in the fall election.