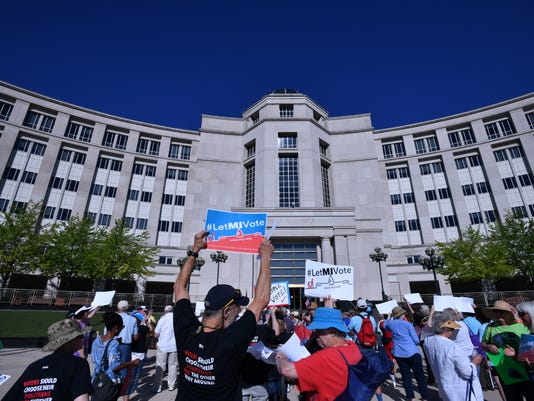 Lansing — A proposal to create an independent redistricting commission will appear on the November ballot, the Michigan Supreme Court ruled late Tuesday in a closely watched case.

The 4-3 decision is rife with political implications in Michigan, where Republicans have maintained or grown congressional and legislative advantages since last drawing the state's political boundaries in 2011.

Volunteers with the Voters Not Politicians committee gathered nearly 400,000 valid signatures to put the anti-gerrymandering plan before voters. The Board of State Canvassers certified the group’s petitions, but the proposal was challenged as being overly broad.

In a split decision, the state’s highest court ruled that voter-initiated proposals are permissible if they do not “significantly alter or abolish the form or structure of our government, making it tantamount to creating a new constitution.”

An opposition group bankrolled by the Michigan Chamber of Commerce had urged justices to keep the measure off the November ballot, arguing it was too expansive to be considered a simple amendment to the state constitution.

Attorney General Bill Schuette fought the proposal on similar grounds, calling it the sort of general revision to the Michigan Constitution that could only be ratified through a constitutional convention. Such conventions are are rarely held.

Viviano's opinion noted the significance of the case, which tested constitutional limitations on the power to put forward voter-initiated amendments, a question he said touches on questions of sovereignty, republicanism and democracy.

“But it is not a judge’s role to philosophize a theory of government,” Viviano wrote. “Rather, we are stewards of the people and must faithfully abide by the decisions they make through the laws they adopt. We accomplish this by adhering to the plain meaning of the text of those laws.”

Katie Fahey, executive director of the Voters Not Politicians ballot initiative, applauded the ruling and said volunteers have already knocked on tens of thousands of doors to explain what will be Proposal 2 in November.

"Our state Constitution begins with, ‘All political power is inherent in the people.’ The court’s decision upholds our right as citizens to petition our government for positive change,” Fahey said in a statement.

The proposal would create a 13-member redistricting commission that would be composed of four Democrats, four Republicans and five independent members who vow they are not affiliated with any major political party. The secretary of state would select the commission members.

The committee would be tasked with redrawing political boundaries every 10 years, a power currently reserved for whichever political party controls Lansing at the time.

Chief Justice Stephen Markman penned a spirited dissent to the majority opinion and was joined by Justices Brian Zahra and Kurtis Wilder. All three were initially appointed to the bench by Republican governors.

The initiative would create a “super-administrative” commission to carry out “the foundational role of self-government,” he wrote, arguing it is exactly the type of proposal that would warrant “the reflection, deliberation, and consensus decision-making” of a constitutional convention.

“The VNP proposal would affect the ‘foundation’ power of government by removing altogether from the legislative branch authority over redistricting and consolidating that power instead in an ‘independent’commission made up of 13 randomly selected individuals who are not in any way chosen by the people, representative of the people, or accountable to the people,” Markman wrote.

“This, in my judgment, reflects a fundamental alteration in the relationship between the people and their representatives.”

Republicans who drew the current boundaries have publicly denied any overt bias and say existing laws already limit manipulation. But recently revealed emails between map makers that were disclosed as part of a separate federal lawsuit point to political calculus.

"We've spent a lot of time providing options to ensure we have a solid 9-5 delegation in 2012 and beyond," then-Michigan Chamber legal counsel Bob LaBrant told a legislative aide in 2011, referencing the congressional majority Michigan Republicans now enjoy.

Other emails showed GOP aides suggesting ways to contain “Dem garbage” to four congressional districts in southeast Michigan and joked about how one district could be shaped to give “the finger” to a Democratic congressman.

Democrats have not formally endorsed the proposal for an independent redistricting commission, but they regularly complain about GOP maps. Former state party chairman Mark Brewer is lead attorney in the federal suit challenging fairness of the 2011 maps.

TonyDaunt, executive director of the conservative Michigan Freedom Fund, bemoaned the state Supreme Court ruling, suggesting justices who were pressured in the case had followed “the rule of bullying, not the rule of law.”

“In the face of threats, bullying and intimidation, the justices of the state Supreme Court bowed to political pressure instead of protecting Michigan’s Constitution,” said Daunt, whose mother was a plaintiff in the case. “They have abdicated their responsibility to the rule of law.”

Michigan's political maps fail several advanced tests of partisan neutrality, according to a recent report by the non-partisan Citizens Research Council, which analyzed election outcomes and determined strong signs of GOP gerrymanders here in 2001 and 2011.

"Democracy is based on the idea that all people should have a voice in their governance, and when certain voices have been quieted by packing them or by cracking those districts, people begin to become more and more disenfranchised and disillusioned with government, and trust in the governmental entities that effect them is eroded," research council president Eric Lupher said Tuesday.

In a separate analysis, the non-profit concluded the Voters Not Politicians proposal was a single-subject amendment to Michigan's 1963 Constitution, which had created a bipartisan redistricting commission that was later deemed inoperable by the state Supreme Court because of criteria that conflicted with federal law.

Opposition arguments "were rooted in this idea that we should judge the proposed amendment relative to current practice and the effects of that on the authority of the Legislature and the role the courts have played," Lupher said. "But ultimately, this is about what our state Constitution says, and I think as the guiding document for our state and local government, that should be the starting point of our analysis."

In addition to legislative and congressional majorities, Republicans also hold a strong majority on the Michigan Supreme Court, where five of seven justices were initially appointed to the bench by GOP governors, including four appointed by Snyder.

The Michigan Chamber of Commerce, which helped fund the lawsuit, has helped steer GOP redistricting efforts for nearly three decades and has made campaign contributions to all five Republican-appointed justices.

The Chamber is "very disappointed with the State Supreme Court decision," President and CEO Rich Studley said in a statement. But “we accept the Court’s decision, and the Michigan Chamber will take no further legal action regarding this ballot proposal,” added Executive Vice President and General Counsel Jim Holcomb.

Voters Not Politicians boasts a large network of grassroots supporters but has also received large contributions from big donors in recent months, according to state disclosure report showing the group has so far raised more than $1.4 million.