Detroit U.S. District Judge Gershwin Drain on Wednesday permanently barred Michigan from enforcing the ban, giving voters across the state the continued right to cast a straight-ticket ballot for all candidates of a single political party. Drain was appointed to the bench by former Democratic President Barack Obama.

Plaintiffs in the case “have demonstrated by a preponderance of the evidence that PA 268 unduly burdens the right to vote,” Drain wrote in a 103-page opinion.

The law “reflects racial discriminatory intent harbored by the Michigan Legislature, and disparately impacts African-Americans’ opportunity to vote in concert with social and historical conditions of discrimination.”

Secretary of State Ruth Johnson, the named defendant in the case, could still appeal the ruling but has not yet announced any specific plans. A spokesman said Wednesday afternoon her office is still reviewing the decision.

Senate Majority Leader Arlan Meekhof, R-West Olive, "strongly disagrees with the notion that the law was intended to discriminate against any group of voters," said spokeswoman Amber McCann. "The straight-ticket option is antiquated and does not reflect the independent nature of most voters."

Attorney Mark Brewer, former chairman of the Michigan Democratic Party, filed the suit in May 2016 on behalf of three Michigan voters and the state chapter of the A. Philip Randolph Institute.

The suit alleged the straight-ticket ban would disproportionately affect black residents, increasing the time it will take them to vote in districts where lines may already be long.

The state Legislature voted in December 2015 to eliminate straight-ticket voting, joining 40 other states that no longer offer the option, including several that banned the option in recent years. 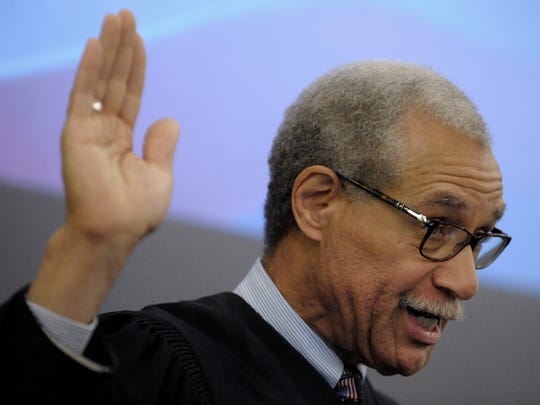 Eliminating straight-ticket voting would decrease the likelihood voters overlook the non-partisan portion of their ballot, encourage more informed voting and increase the possibility that a third-party or independent candidate could win election, Republican lawmakers argued.

"Straight ticket voting is an outdated relic from a long bygone era of politics which hasn't existed for decades.  It is well past time to get rid of this embarrassing fossil and give the power back to the people," Leonard said in a statement.

But Drain said he was persuaded by evidence and arguments that Republicans were motivated to eliminate straight-ticket voting because it had traditionally benefited Democrats, particularly in areas with large numbers of voting-age African Americans.

“The goal of ending the Democratic Party’s success with straight-ticket voters, therefore, was achieved at the expense of African-Americans’ access to the ballot,” Drain wrote. “Thus, the Michigan Legislature intentionally discriminated against African-Americans” in violation of the Equal Protection Clause of the U.S. Constitution.

Attorney General Bill Schuette's office, representing Johnson in the case, on Monday asked Drain for a quick ruling because of upcoming election deadlines.

By law, ballot wording must be certified to local county clerks by Sept. 7, so “litigation related to the general election ballot including appeals must be resolved by that date,” Assistant Attorney General Denise Barton wrote in a court filing.

Schuette’s office is now "reviewing the ruling and discussing next steps with our client agency," said spokeswoman Andrea Bitely.

"Ronna Romney McDaniel conceded that she supported PA 268, in part, because it would help Republican candidates win elections," Drain wrote.

Former state Rep. Lisa Posthumus Lyons, in a Nov. 12 text message to her father Richard Posthumus, then serving as the legislative director to Snyder, noted that elections clerks across the state were asking for no-reason absentee voting “to mitigate the longer lines straight party elimination causes.”

GOP Gov. Rick Snyder signed the straight-ticket ban in January 2016 but urged the Legislature to allow no-reason absentee, which Republican majorities have not done.

The straight-ticket voting ban never took effect because Drain suspended it prior to the 2016 general election.

But the passage of the law was celebrated by Republicans power brokers.

“While only time will bear out the importance of this for those running for office ‘down ticket,’ the implications are significant,” Betsy DeVos, a GOP mega donor who now serves as U.S. Secretary of Education, told Meekhof in a December 2015 email congratulating him for passing the law.