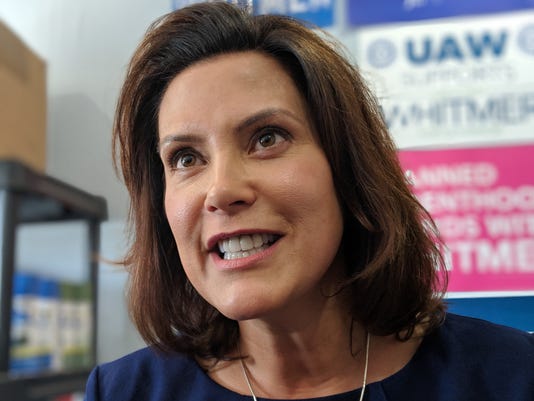 Gretchen Whitmer at her campaign office in Lansing on Aug. 2, 2018.(Photo: Jonathan Oosting)

As she kicked off her final statewide tour before Tuesday's primary, the former state senate minority leader defended her own work to expand health care access amid opposition claims she has resisted calls for socialized medicine because of campaign contributions from insurance executives.

“I don’t care what an individual company’s position is on an issue,” Whitmer told reporters, vowing to fight against work requirements that Republican legislators recently added to a Medicaid expansion law she helped secure votes for in 2013.

The East Lansing Democrat said she supports “universal coverage” and would work toward that goal in Michigan but is not going to “deceive people and tell you I can magically fix everything all by myself.”

“I’m not going to utter buzz phrases because I think it’s deceptive to pretend a governor can count on two waivers from the Trump administration, and a constitutional amendment, and a hundred billion dollars. I’m not going to play those games.”

Whitmer did not directly name her two primary opponents, Abdul El-Sayed of Shelby Township and Shri Thanedar of Ann Arbor, who are courting the progressive wing of the Democratic party and have each vowed to purse single-payer health care systems.

El-Sayed in June unveiled plans for a state-level Medicare-for-All system that he says could produce significant savings for families. But it would also come with a significant price tag, which he’s proposed paying for through a new tax on large businesses and a graduated income tax increase.

Moving to a graduated income tax would require voter approval for an amendment to the Michigan Constitution. Other elements of the plan could require sign off by the state Legislature, currently controlled by Republicans, or GOP President Donald Trump’s administration.

“Senator Whitmer here clearly shows that Blue Cross Blue Shield has written her talking points on health care," said El-Sayed spokesman Adam Joseph. "They bought that with their $144,710 at a closed-door fundraiser and however much money they’ve funneled through her 'Build a Better Michigan' dark money super PAC."

Build a Better Michigan is a political organization started by Whitmer allies that is running television ads that feature her. There's no evidence Blue Cross has donated to the group, but two of its largest donor funds have not disclosed their own contributors.

Thanedar has not released a specific single-payer health care system, but he’s vowed to pursue a state-level system if federal efforts in Congress — where Democrats are currently outnumbered in the House and Senate — are unsuccessful.

The wealthy Indian immigrant has flooded the state with mailers attacking Whitmer for contributions from executives and employees at Blue Cross Blue Shield of Michigan, where her father previously served as chief executive. The mailers suggest she is “firmly in the pocket” of the health care industry.

But Whitmer said Thursday she would “stand up to anybody” on health care, including Blue Cross, a nonprofit insurer she said she disagreed with at times when serving in the state Legislature.

Whitmer told reporters she had to personally fight Physicians Health Plan when the insurer tried to deny payment on chemotherapy treatment for her mother, who eventually died of brain cancer.

Single-payer health care, pushed by Vermont U.S. Sen. Bernie Sanders in the 2016 presidential election, has become an increasingly mainstream idea among Democrats. Sanders, who won the state’s 2016 presidential primary, has endorsed El-Sayed and is set to campaign for him Sunday in Detroit and Ypsilanti.

Democratic Rep. Debbie Dingell of Dearborn recently helped launch a Medicare for All Caucus in the U.S. House.

But state House Minority Leader Sam Singh, D-East Lansing, said calls for a state-level system are “a little naïve” because of funding questions and potential road blocks by the Trump administration.

“As an aspiration down the road, a decade down the road, I think we should all look at things like that as an opportunity,” said Singh, who is supporting Whitmer for governor and joined her at a Lansing campaign stop.

“But they’re not trying to suggest that’s going to be able to happen on Day One," he said of colleagues in the Michigan House.

Her Lansing kick-off event was the first of 36 campaign stops Whitmer is expected to make across the state through the Tuesday primary. She’ll rally with Detroit Mayor Mike Duggan, U.S. Rep. Brenda Lawrence and Wayne County Executive Warren C. Evans Sunday at Gordon Park in Detroit.

While she isn't advocating for single-payer health care, Singh said it is "almost comical" to hear critics argue that Whitmer is not a progressive Democrat.

"She's been the person fighting in the trenches with us all along," he said. "You can't go to somebody in the LGBT movement or the women's rights movement and say, where’ has Gretchen Whitmer been? They all know she’s been with them shoulder to shoulder."

Whitmer is also facing attacks from the right. Republican National Committee spokesman Michael Joyce on Thursday bashed her endorsement from U.S. Sen. Kirsten Gillibrand, noting the New York Democratic senator recently called for elimination of the U.S. Immigration and Customs Enforcement agency, which she said she'd like to replace.

“Gretchen Whitmer is in a horse race with Shri Thanedar and Abdul El-Sayed to see who can go furthest to the left, and coming down the home stretch she’s willing to do anything to get to the left of her opponents,” Joyce said.