The lines are drawn in the battle to be Michigan’s next governor, and Democrat Gretchen Whitmer has a new lieutenant. 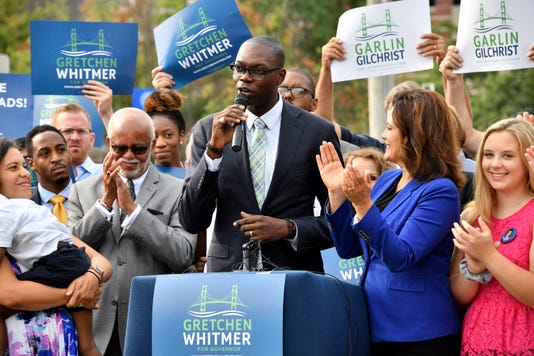 Lansing — The lines are drawn in the battle to be Michigan’s next governor, and Democrat Gretchen Whitmer has a new lieutenant.

The former state Senate minority leader from East Lansing on Monday officially announced that Garlin Gilchrist II of Detroit will be her running mate as she takes on Republican Attorney General Bill Schuette in the November general election.

Gilchrist, a 35-year-old who has served as executive director at the University of Michigan's Center of Social Media Responsibility since February, has never held elected office, but experts say he brings youthful energy and diversity to the Whitmer campaign.

He also gives the mid-Michigan Democrat another connection to vote-rich Detroit, which she narrowly lost in the primary to Ann Arbor entrepreneur Shri Thanedar despite the backing of Mayor Mike Duggan. Whitmer still won all 83 counties and captured 52 percent of the vote to top the three-way race that also featured former Detroit health director Abdul El-Sayed.

Schuette last week selected Kent County Clerk Lisa Posthumus Lyons, a former state legislator, as his pick for lieutenant governor. Lyons puts at least one woman on the Republican statewide ticket in a year when a record number of women are running for statewide office and could help solidify GOP support in west Michigan.

Celebrating the Gilchrist pick at a Monday morning press conference in Lansing, Whitmer called him a “tech guru” who could help her “get things done” as governor. She characterized the former Microsoft software engineer as a problem solver, a description Republicans quickly challenged by pointing out his recent need to resolve his own campaign finance issues.

If elected, Gilchrist would be Michigan's first African-American lieutenant governor. He would also be the first without legislative or congressional experience since James Brickley, who served under Gov. William Milliken from 1971 to 1975 and again from 1979 to 1983. Brickley was a Detroit City Council member and U.S. attorney for the Eastern District of Michigan before becoming lieutenant governor.

“I have more experience than the last two governors combined,” said Whitmer, who served 14 years in the state Legislature. “Experience is not a problem in state government. What is a problem right now is we don’t have people who know how to get things done.”

"I'm so proud that we have a ticket that reflects the beauty of diversity in the state of Michigan, whether that's geographic diversity, racial and ethnic diversity and ... gender diversity," Gilchrist said during an introductory press conference in downtown Lansing. "I’m excited to just be joining this team."

Whitmer did not have a particularly deep bench to choose from if she wanted to balance out the ticket, said Detroit political consultant Greg Bowens, who noted a relative dearth of African-American Democrats with a statewide presence.

“Given the kind of choices that were available, it seems like a decent enough pick to try to attract some younger voters and some African-Americans,” Bowens said of Gilchrist.

“A lieutenant governor pick is never going to set the world on fire. It matters from the perspective that at least the ticket is not a straight-up insult to African-Americans and people of color who would have had no representation on the statewide ballot. That’s not who we are as Democrats.”

Democrats are expected to make health care a major issue in the fall elections, and Gilchrist wasted little time joining the fight. 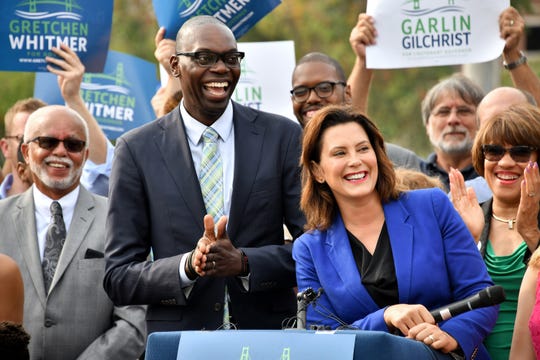 He pointed out that Whitmer crossed the aisle to work with GOP Gov. Rick Snyder on the Healthy Michigan plan, which now insures more than 670,000 residents. But Schuette has not said whether he would keep it in place and has been a vocal critic of the federal health care law.

Democrats want to build on “Gretchen’s track record as someone who wants to expand care and coverage rather than taking it away the way Bill Schuette and the Republicans want to do,” Gilchrist said.

Whitmer faced criticism from the progressive left during the Democratic primary for failing to join calls for a single-payer health care system. A single-payer supporter, Gilchrist said he and Whitmer both believe any national health care program would best be implemented at the federal level, but they are running for state government.

Whitmer and Gilchrist is “the most liberal ticket in Michigan history,” Sandler said.

“He’s been working for MoveOn.org, working for the Obama campaign. He’s a political activist. I don’t think he has the requisite experience to handle the job.”

Michigan Republican Party Chairman Ron Weiser said Gilchrist may be “one of the least qualified candidates ever” to seek the office of lieutenant governor. He noted that Gilchrist lost his only bid for elected office last year when he attempted to oust longtime city Clerk Janice Winfrey.

“Gretchen Whitmer had a duty to select a running mate who could run our state if called upon to do so,” Weiser said in a statement. “She has failed.”

But Whitmer called Gilchrist a rare talent who was selected “thoughtfully with thorough vetting,” telling reporters she is confident he is qualified to be second in command.

“I couldn’t be more thrilled about this partnership,” she said. “If it was just about experience, I can tell you this: After four decades of Bill Schuette, we can’t afford any more of that kind of experience.”

Surrounded by friends, family and supporters, Gilchrist said his work in the public and private sectors has given him a “holistic sense of what government can do.”

Gilchrist was a software engineer for Microsoft in Washington state before working as a community organizer, national campaign director for MoveOn.org and a social media manager for former President Barack Obama’s 2008 presidential campaign.

After nine years out of state, he returned to his hometown of Detroit in 2014. He first was deputy technology director for civic community engagement under Duggan for a little over a year before becoming director of innovation and emerging technology for more than a year.

“My career has been all about making systems work for people, whether that’s fixing government systems like I did in the city of Detroit, but also being able to create technology that’s accessible to people," he said.

Term-limited Lt. Gov. Brian Calley was 33 years old when he took office in 2011 but had already served in the state House for four years. His predecessors John Cherry, Dick Posthumus and Connie Binsfeld each spent time in the Legislature. Former Gov. Jim Blanchard's lieutenant governor, Martha Griffiths, had served in Congress.

The lieutenant governor presides over the Michigan Senate and can break tie votes. He or she serves as acting governor when the governor leaves the state and assumes the role if the governor is unable to serve due to death, illness or incapacitation.

Gilchrist turned heads last year with his aggressive campaign for Detroit clerk. He raised more than 10 times the amount of money as the 12-year incumbent clerk to fuel a late surge but was unable to overcome Winfrey's edge with absentee voters. Winfrey won by 1,482 votes.

Gilchrist is known as a “worker bee” and “had a pretty good showing” in the Detroit clerk’s race after launching his campaign with little name recognition or public presence, Bowens said. He suggested Winfrey should be happy Gilchrist accepted Whitmer’s invitation rather than challenge her again.

Schuette campaign strategist John Sellek questioned Gilchrist's ability to fix problems, suggesting he only recently tried to fix his own campaign finance issues because Gilchrist knew Whitmer was going to select him.

"Funny how being anointed as the LG pick gets you (motivated) to fix things and make systems work," Sellek said on Twitter.

Asked about the late filings, Whitmer spokeswoman Nicole Simmons said Gilchrist's clerk campaign has "been dormant for nearly a year." The committee's reports "have been filed, and a late filing fee has been submitted," she said.

Steve Hood, a Democratic political strategist in Detroit, said Gilchrist should have defeated Winfrey after she presided over a series of election irregularities in the 2016 presidential contest.

"On the surface, it's a curious pick because he doesn't have any legislative experience," Hood said of Gilchrist, suggesting Whitmer didn't have many qualified Detroit legislators from which to choose.

A Detroit native, Gilchrist said he expects to spend significant time in his hometown during the campaign as Whitmer looks to build support in the Democratic stronghold.

Experts say Gilchrist could also help Whitmer appeal to voters on the progressive left who rallied behind El-Sayed in the Democratic primary. Gilchrist's 2017 clerk campaign was endorsed by the Our Revolution advocacy group that grew out of Vermont U.S. Sen. Bernie Sander's 2016 presidential campaign, and El-Sayed praised Whitmer for picking Gilchrist, calling it a "great choice."

Gilchrist was joined at the press conference by his wife Ellen, their 4-year-old twins Garlin III and Emily Grace, along with grandparents. His kids attend a Catholic private school in their Detroit neighborhood, but the family supports public education, he told The Detroit News.

Democrats and Republicans are expected to formally nominate candidates for lieutenant governor, attorney general, secretary of state, university boards and the state supreme court at their party conventions next weekend.