Michigan Gov. Rick Snyder ordered U.S. and Michigan flags be flown at half-staff through Sunday in honor of the late U.S. Sen. John McCain of Arizona 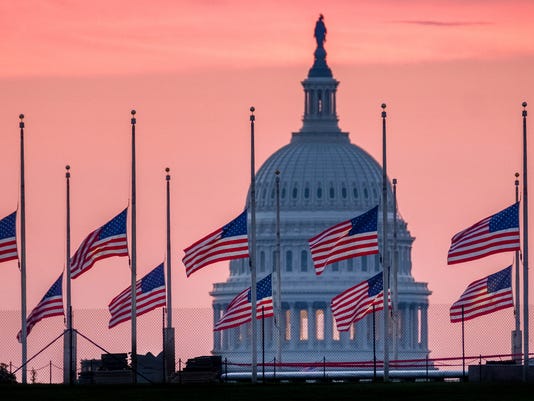 Flags flying a half-staff in honor of Sen. John McCain, R-Ariz., frame the U.S. Capital at daybreak in Washington, Sunday, Aug. 26, 2018. McCain, 81, died at his ranch in Arizona after a yearlong battle with brain cancer.(Photo: J. David Ake, AP)

Snyder's office said flags will be lowered on all state buildings and within the state Capitol complex through McCain's burial Sunday in Annapolis, Maryland.

Snyder's decision to lower flags statewide came as the White House returned its flags Monday afternoon to half staff amid criticism over its earlier decision to raise them after a day.

“Sen. John McCain made an incredible, positive impact on our country and on all who call it home. He was a hero and public servant who worked each and every day to make this country better,” Snyder said in a statement.

“Sue and I send our deepest condolences to Sen. McCain’s loved ones during this trying time. It is my hope that we will come together as a nation and honor his legacy.”

McCain, a Navy fighter pilot who spent five years in Vietnam as a prisoner of war, served six terms in the U.S. Senate. He will lie in state in the U.S. Capitol rotunda Friday.

President Donald Trump issued a statement late Monday afternoon saying that, "Despite our differences on policy and politics, I respect Senator John McCain’s service to our country and, in his honor, have signed a proclamation to fly the flag of the United States at half-staff until the day of his interment."

Trump said, at the request of the McCain family,  he also authorized military transportation of McCain’s remains from Arizona to Washington, D.C., military pallbearers and band support, and a horse and caisson transport during the service at the U.S. Naval Academy.

Trump is not expected to attend McCain's funeral at his family's request.