Republican Michigan Gov. Rick Snyder is “banning the box” on state job applications in an attempt to help former felons return to the workforce 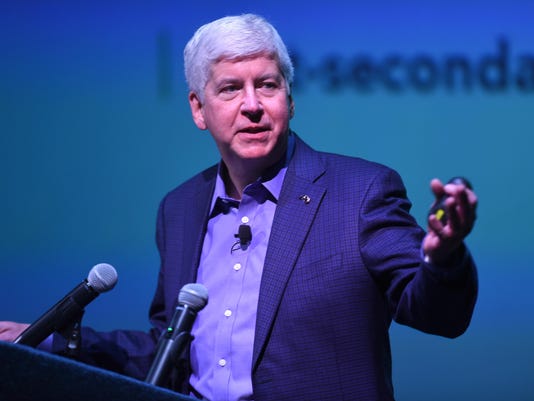 Lansing — Republican Gov. Rick Snyder is “banning the box” on state job applications in an attempt to help formerly convicted felons return to the workforce and set an example for employers across Michigan.

The term-limited governor on Friday will sign an executive directive for state departments that, beginning Oct. 1, will prevent them from using an application check box to ask job seekers if they’ve been convicted of a felony.

Snyder is also announcing that the Michigan Department of Licensing and Regulatory Affairs has removed all criminal history questions from licensing applications, except when required under state or federal law.

Applicants — primarily in skilled trades professions that require occupational licenses — will instead be asked to attest to their ability to serve the public and their rehabilitation from any former offenses.

Snyder said the initiatives are the latest step in his focus on "smart justice" and he hopes the state policies will encourage other private and public employers to consider former inmates when trying to fill job openings.

"I think it's important to be a role model," the governor said. "If you're going to advocate for others to do it, we should be doing it ourselves."

The executive action comes six months after Snyder signed a law that generally prohibits local governments from adopting or enforcing an ordinance that regulates the information an employer must request or exclude from a job application. Critics said the Republican law may prohibit local "ban the box" efforts.

Democratic lawmakers have routinely sponsored bills that would prohibit employers from asking about a felony conviction on an initial job application. State Rep. Fred Durhal Jr, D-Detroit, introduced a ban-the-box bill in October 2017, but it has not advanced.

Snyder said he is “open” to a discussion on legislation but is not proposing any government mandates at this time.

"We're doing this voluntarily as a state," he said, "but I hope the experience is good, that people will see the benefits of it and they'll make their own decisions to join and, over the longer term, people will say should we be looking at this more legislatively."

The governor's "outside the box" state government initiative was hailed by the American Civil Liberties Union of Michigan and the Mackinac Center for Public Policy, two groups that span the ideological spectrum but support criminal justice reforms.

"This is an important step in ending unfair and unnecessary practices that have excluded thousands of willing, able and motivated individuals from gaining employment and licenses," said ACLU policy counsel Kimberly Buddin, who encouraged state leaders to take additional steps "that further dismantle barriers to self-sufficiency for returning citizens.”

A job is a "critical factor" in former convicts becoming contributing members to society, said Jarrett Skorup of the free-market-oriented Mackinac Center. "Research from other states shows that these changes will increase economic opportunity and enhance public safety by encouraging dignified work.”

The licensing changes announced Friday are expected to help the Michigan Department of Corrections expand skilled trades programs at the Vocational Village, a hands-on training program pioneered at the Richard A. Hanlon Correctional Facility in Ionia designed to help inmates land jobs before or upon release.

The state last year opened a second Vocational Village at the Parnell Correctional Facility in Jackson and is planning at third at the Huron Valley women's prison in Ypsilanti. The corrections and licensing departments will sign a memorandum of understanding on Friday intended to ensure offenders trained in a certain skilled trades will be eligible for a state license.

"When you talk about electricians or plumbers, we all know we can use more people in those fields," Snyder said, "and if we can broaden the pipeline of people able to do that work, I think it's a good thing for all of us."