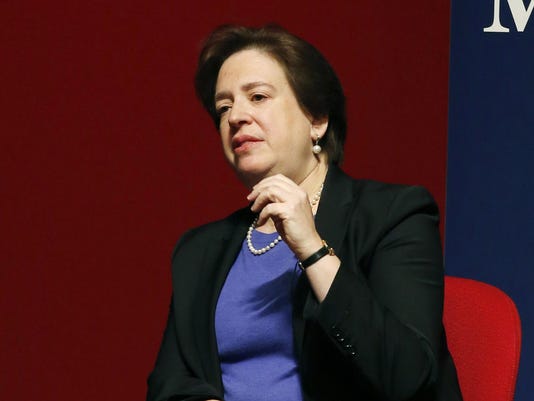 Lansing — U.S. Supreme Court denied Friday a request to preserve straight-party voting in Michigan after a last-minute attempt to keep the option on the Nov. 6 ballot.

Attorneys for the Michigan State A. Philip Randolph Institute on Thursday filed an emergency application to Justice Elena Kagan, arguing a straight-ticket ban that was revived this week could cause “confusion and chaos” for voters this fall, a charge disputed by state officials who largely finalized the ballot Friday.

Kagan referred the issue to the court, which denied the request without citing a reason. The two-sentence order indicated that two of the court's current eight justices — Sonia Sotomayor and Ruth Bader Ginsburg, appointees of Democratic presidents — wanted to hear the appeal.

Michigan’s Republican-led Legislature voted to end straight-party voting in late 2015, but the option continued in 2016 amid a lawsuit alleging the change would disproportionately affect African-Americans. The U.S. Sixth Court of Appeals, in a 2-1 decision on Wednesday, said plaintiffs were unlikely to win their case and ordered the ban to take effect for the election in about three months.

By ending straight-ticket voting, the appeals court "upended" the status quo in Michigan, which has given voters the option to check a box to choose all candidates from a single party for 127 years, attorneys said in their U.S. Supreme Court filing.

The change "will cause great confusion and delay in the polling places on Election Day," they wrote.

Republican Secretary of State Ruth Johnson's office successfully asked the court to stay out of the case, arguing the straight-ticket voting is not actually the status quo because the Michigan Legislature changed the law more than two-and-a-half years ago. Voters must now place a mark for every candidate they want to elect in each partisan race instead of filling in one mark for all of the candidates of one political party.

"Here, it was the district court that altered the status quo by enjoining the operation of Michigan’s duly enacted statute."

While he fears that banning straight-ticket voting could lead to longer lines and wait times in some Detroit precincts, Elections Director Daniel Baxter said the most pressing issue for the state's largest city would be finding ways to inform voters of the change.

“We’ll be using our newsletter” and other channels to communicate with voters, “but there’s always those folk who fall through the cracks, who will go into the polls on Election Day, and they won’t be ready for it,” Baxter said. “They’ll be looking for that straight-party vote.”

The Secretary of State's Office, which helps oversee elections across Michigan, believes the change would "not significantly delay voters at all,” said spokesman Fred Woodhams. “(The clerks) can set up additional polling stations within a precinct to accommodate more people.”

Detroit will consider putting more voting booths at some locations to avoid Election Day bottlenecks and will focus on training poll workers to ensure they can assist voters who are confused, Baxter said.

“If there is a silver lining in it, we’re grateful that it failed in 2016 during the presidential election,” he said, noting the law was suspended two years ago before it took effect.  “Presidentials are much higher in terms of turnout.”

In Wednesday's appeals court ruling, Judge Daniel Boggs questioned claims that eliminating the straight-ticket option would increase the voting process by 3 minutes, suggesting the figure was  "essentially pulled out of the air."

Several policy decisions could influence the time it takes to vote, including judicial elections, non-partisan candidates, differences in the number of elected local officials on a ballot  and “obviously, each voter’s own decisions,” said Boggs, a Republican appointee.

About 58 percent of voters in Wayne County cast a straight-party ballot in 2014. While straight-ticket voting rates are higher in Detroit than many other parts of the state, "that is a matter of degree, not of kind, and is clearly linked to strong partisanship, rather than race," Boggs wrote.

The ruling was dismissive of voter concerns and preferences, said Todd Cook, campaign director for Promote the Vote, a ballot committee seeking to allow straight-ticket voting, no-reason absentee voting and enshrine other voting rights in the Michigan Constitution.

“To tell voters in Michigan who have some of the longest wait times, 'you’ll have to wait longer and it’s not a big deal' is, I think, disappointing to the people who supported a process that works for everyone,” Cook said.

Ingham County Clerk Barb Byrum, a Democrat and former state lawmaker, said straight-ticket uncertainty and other recent ballot changes make it “very difficult” to prepare for elections and get absentee ballots out to military voters by Sept. 22, as required.

The Ingham County clerk’s office prepares roughly 180 ballot types for different municipalities and school districts, Byrum said. It usually runs names and ballot language by candidates before finalizing the ballot, which must then be approved by the county’s election commission at a public meeting.

“Running an election is not just on Election Day," Byrum said.

The Secretary of State's Office has already told counties they should program ballots without the straight-ticket voting option and is prepared with a "list of effective materials and instructions for clerks," Lindstrom, the solicitor general, wrote in his filing to the U.S. Supreme Court.

Voter instructions will be simple and have already been drafted, he said: "Vote for the individual candidate of your choice in each office."

Ballot equipment around the state is designed to accommodate either straight ticket or non-straight ticket ballots, Woodhams said, suggesting clerks should have an "adequate amount of time to prepare ballots by the deadline to mail absentee voters overseas."

“Certainly, we would have preferred to have this wrapped up years ago, but when the judges rule, that’s out of anyone’s control," he said.

Mark Brewer, a lead attorney in the lawsuit and former chairman of the Michigan Democratic Party, said the Supreme Court understood "the urgency” of the issue and argued any additional disruption a late ruling might have would be the fault of the state.

“It was the state that said stop it now, and they waited till the very last minute to go to the federal courts to ask for all this," he said.

Straight-party voting has traditionally provided a boost to Democrats, helping them win down-ticket education posts. But the option aided Republicans in 2016 when President Donald Trump’s unexpected win helped some GOP candidates ride his coattails into office.

“If you take a look at straight-ticket voting in, let’s say, Detroit or Downriver, it probably has a benefit for Democrats, so I think it’s kind of a wash.”

Republicans who pushed to ban straight-ticket voting argue it will lead to more thoughtful voting, encouraging voters to research and select individual candidates rather than simply vote for a political party.

Eliminating the option will lead to a drop-off in voting for down-ticket races because some voters who have cast straight-ticket ballots in the past “are there just because they’re excited about a presidential race or the governor’s race,” Anuzis said. “But that’s probably healthy for the system because you’ve got people actually voting for who they know."

“The opportunity to vote straight-party has been an option for many years, and it is unfortunate that the Republicans, in their infinite wisdom, have decided to confuse the ballot and confuse voters on Election Day,” she said.

State Senate Elections Committee chairman Dave Robertson, R-Grand Blanc, said fears of longer lines and wait times are “speculative” and told The Detroit News he has “the full confidence that local clerks will know how to address the issues in their own communities as needed.”