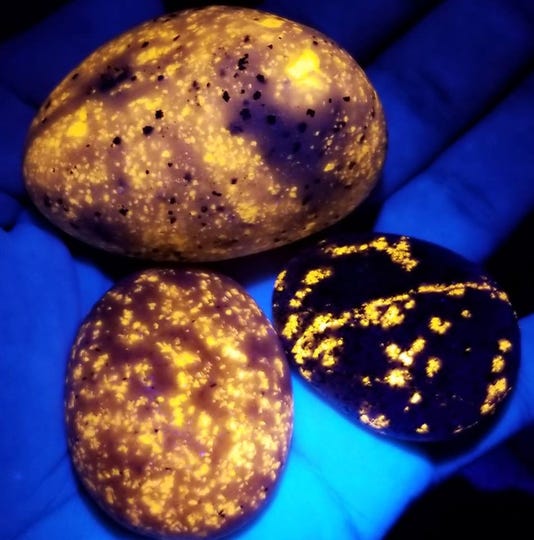 Rocks in the Upper Peninsula that glow under a certain light are grabbing the spotlight.

"Yooperlites" — or more properly, the rocks classified as syenite — are getting a lot of attention from rock hunters, collectors and the media.

"It's beyond my scope of reality right now," said Rintamaki, who lives in Bay Mills Township, about 25 miles west of Sault Ste. Marie. "This is so crazy. I could have never imagined in my lifetime taking off like this."

Rintamaki organizes and operates Yooperlite hunting tours. His tours cost $50 per person, and hunters can keep stones they find and the flashlight. He said he started doing the tours about a year ago. This year's tours are already booked up, he said, but he's taking reservations for next year.

Rintamaki said he first came across the rocks last year while walking along a beach on Lake Superior. He ventured out on the beach with a mineral light, an ultraviolet flashlight that makes certain minerals fluoresce.

On his third outing, he found three glowing rocks the size of dimes. He tried to identify them through a Google search and by taking them to rock shows, but he had no success. So he started calling them Yooperlites.

Rintamaki eventually said he sent the rocks to scientists at Michigan Technological University in Houghton, who determined they were syenite, an igneous rock similar to granite but without the quartz. The researchers sent the rocks to a university in Saskatchewan to confirm their findings, he said.

Since he first started talking about the rocks a week or so ago, he said he's been interviewed by TV stations from as far away as New York City.

Rintamaki's Facebook page had about 500 "likes" two weeks ago, he said. On Friday, it skyrocketed to more than 2,700.

Kevin Cole, associate professor of geology at Grand Valley State University, said it's not unheard of for certain rocks to glow under certain light, but it's not common.

He said rocks such as syenite have a crystal structure that move electrons from the sulfur they contain to glow under light.

"The ones I've seen typically fluoresce with a yellowish light," he said.

Cole said many people collect fluorescent mineral rocks like syenite, and in some places, they're used as gravel on driveways or the roofs of buildings.

So are they valuable?

"The rarer they are, the more valuable they are, but it's all in the eye of the buyer," Cole said. "To me, they're just interesting rocks."

It's possible Yooperlites could become as popular as Petoskey stones with tourists who visit the Upper Peninsula, the professor said. Petoskey stones are fossilized corals unique to the northwestern part of Michigan's Lower Peninsula.

"Very few people have heard about these rocks before," Cole said. "The thing is they're rare. And when something is rare, people will want it."