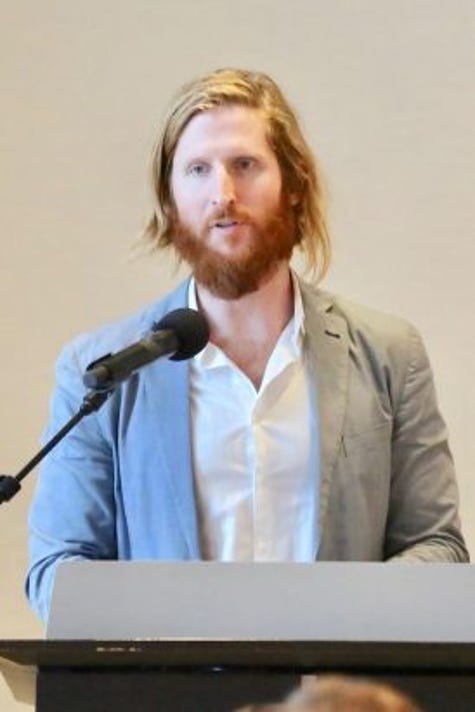 The University of Michigan is disciplining the professor who sparked a global controversy after he refused to recommend a student for study in Israel because of his support for Palestinians, according to a letter obtained by The Detroit News.

John Cheney-Lippold, a tenured American and digital studies associate professor, will not get a merit raise during the 2018-19 academic year and can't go on his upcoming sabbatical in January or another sabbatical for two years, according to the letter signed by Elizabeth Cole, the interim dean of UM’s College of Literature, Science and the Arts.

He could also face additional discipline, up to and including dismissal, if a similar incident occurs in the future, Cole wrote in the letter, dated Oct. 3.

"Your conduct has fallen far short of the University’s and College’s expectations for how LSA faculty interact with and treat students," according to Cole's letter, which The News obtained through the Freedom of Information Act. "This letter is a strong warning that your behavior in this circumstance was inappropriate and will not be tolerated."

"In the future, a student's merit should be your primary guide for determining how and whether to provide a letter of recommendation. You are not to use student requests for recommendations as a platform to discuss your personal political beliefs."

UM's actions come one month after Cheney-Lippold declined to write a letter of recommendation for one of his students, Abigail Ingber, because she wanted to study for a semester in Tel Aviv.

He told Ingber, a communications student, he would write the letter when she asked him in August, then rescinded his offer in September when he learned she wanted to study in Israel. He initially told Ingber that UM embraced an academic boycott of Israel, then later clarified that he personally stood in solidarity with Palestinians, who accuse Israel of human rights violations.

Cheney-Lippold's discipline comes as a second UM student has reported being denied a letter of recommendation to study in Israel, with the instructor also citing an academic boycott aimed at protesting the Jewish state’s treatment of Palestinians.

According to the Washington Post, Jake Secker asked Lucy Peterson, a graduate student instructor, for a letter of recommendation to study in Israel. But she denied the request, citing a pledge to boycott Israeli institutions in support of Palestinians.

Cheney-Lippold's action spawned an international outcry last month from the Jewish community, which prompted more than 60 organizations to write to UM President Mark Schlissel. Other organizations urged the university to take action against the instructor and even called for the U.S. Department of Education to investigate.

At the same time, the controversy also stirred the Palestinian community, who hailed Cheney-Lippold's stance.

Besides outlining disciplinary action, Cole's letter chided Cheney-Lippold for writing two letters previously for students who wanted to study in Israel because he didn't have tenure. Cole also criticized him for using class time in two courses he is teaching to discuss his views on the Palestinian-led BDS (Boycott, Divest, Sanctions) movement and his decision to not write a letter for Ingber.

"You did not honor your responsibility to teach your students the material on your syllabus related to your field of expertise," Cole wrote. "Although this material was discussed in only one session, an entire class period represents a significant portion of your total contact hours with students over the semester. This use of class time to discuss your persona] opinions was a misuse of your role as a faculty member."

The letter also said Cheney-Lippold violated Ingber's privacy in some statements he made to media outlets and "cast a national spotlight" on her.

"Your actions throughout this entire series of events has harmed your students and has caused significant disruption to the Department of American Culture. the College, and the University as a whole," Cole wrote.

Cheney-Lippold's current salary was unavailable, said UM spokesman Rick Fitzgerald. But before he received tenure, he was an assistant professor earning $77,797. UM does not give cost-of-living raises, only merit raises, Fitzgerald said.

Cheney-Lippold was scheduled to go on a sabbatical for one semester starting in January.

Cheney-Lippold did not respond Tuesday to a request for comment on his discipline. But he said previously that he was bombarded with email, including some from people who hurled death threats at him. He said he viewed his decision as a form of resistance like other civil rights movements, and an issue of free speech for standing in solidarity with Palestinians, who accuse Israel of human rights violations.

"I respect people's opinions," Cheney Lippold said previously. "I disagree with them fully. But I respect them in the way that I wish they would respect mine."

Radhika Sainath, a Palestine Legal staff attorney who was advising Cheney-Lippold, said his case had been referred to a local attorney.

"I will say as an expert on the topic of censorship, that the university is violating John's rights by compelling him to speak in favor of a program that is fundamentally discriminatory and violates human rights, and that the university is doing so in response to an international pressure campaign," Sainath said.

Anna Baltzer, director of organizing and advocacy at the U.S. Campaign for Palestinian Rights, said it “would be shameful for the University of Michigan to punish Professor John Cheney-Lippold for his brave and principled decision to support Palestinian human rights.”

“Participating in boycotts to advance progressive causes has a long and time-honored history in the United States and around the globe, where people have acted on their conscience and boycotted to express their support for the American Civil Rights Movement, the South African movement to end apartheid, and more recently to express opposition to the hateful politics of the Trump administration,” Baltzer said.

“It has been heartening to see a growing number of people around the world similarly heed the Palestinian call to boycott as a way to end Israel’s crimes against Palestinians, including its ongoing destruction of Palestinian homes, theft of Palestinian land, and decades of brutal military rule. If the University of Michigan punishes Professor Cheney-Lippold for heeding this call to justice, it will be standing on the wrong side of history.”

But others hailed the move by UM.

Speaking publicly for the first time, Mark Ingber, the father of Abigail Ingber, said he thought that UM should have fired Cheney-Lippold, repeating the words of Regent Denise Ilitch and calling his actions "anti-Semitic."

"The way he publicized everything and put his own personal beliefs ahead of the academic interests of the students and caused shame to the university and our daughter, that was sufficient basis for him to be terminated," Ingber said.

He also said he thought that Cheney-Lippold waited until his tenure became effective  on Sept. 1 to deny his daughter a letter of recommendation, calling it "manipulative" so that he would be immune to discipline

But Ingber, an intellectual property lawyer who lives in West Orange, N.J., said he realizes UM officials took the strongest actions that they could.

"We are happy the university acted quickly," he said. "It may not be the punishment we want but it’s a punishment and I know they are watching him and if slips up again … then he will suffer further," Ingber said.

Ingber said his daughter learned this week that she has been accepted to study for a semester in Tel Aviv.

He said he and his wife  are waiting to see what the university does to set policy so that this does not happen again.

"We want something good to happen out of this," Ingber said.

Tilly Shames, executive director of the University of Michigan Hillel, said the letter "makes it clear that the university will not tolerate a professor interfering with a student's academic aspirations, and we hope this decisive message will deter other instructors from taking similar action."

"We appreciate that the university is strongly upholding its student-centered values and reinforcing its opposition to boycotts against Israeli institutions," Shames said.

UM Regent Andrea Fischer Newman added that the disciplinary action was necessary because Cheney-Lippold's actions interfered with the educational aspirations of a student.

"The university must also do more and speak against anti-semitism so that all students can feel welcome on our campus," she said.

"The University of Michigan should be loud and fully transparent, making clear that a professor’s personal politics should never interfere with the academic freedom of his students," Greenblatt said. "We hope that there is policy established to ensure that this doesn’t happen in the future.”