Weather "will be the determining factor" in what gets done when, MDOT says 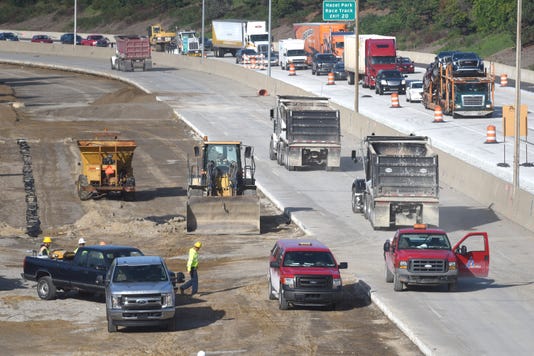 The Michigan Department of Transportation says construction on two of Metro Detroit's busiest freeways migh not be completed before winter starts, leaving motorists in Macomb and Wayne counties facing the prospect of having to wait until spring to see the work fully completed.

With work resuming after a three-week lockout of construction crews, MDOT said Wednesday that the weather will determine how much progress can be made on the Interstate 696 and 75 projects.

MDOT spokeswoman Diane Cross said no matter what happens, east and westbound I-696 and all of the ramps will be open by winter.

For example, crews may have to put down asphalt now instead of pouring concrete. In that case, next spring, they'd have to tear up the asphalt and then put down concrete, Cross said.

"The part that’s unknown is exactly when and if some of the work will need to be temporary," she said. "What we don’t know is do we get to finish all of it before the temps are so freezing that we can’t work on it anymore and if we have to finish it in the spring.”

Cross said MDOT officials won’t know where they stand on these plans for sure until after the construction contract deadline is up in early November. Until then, it is up to the contractors to get the work done, she said.

Opening I-696 for the winter will mean more pain for motorists come spring, however.

"When we come back (in the spring), we’re going to have to affect traffic again," Cross said. "It’s expensive and it’s a pain to the drivers. But we have to get it open for the winter. What the costs are, who is going to pay it, what we’re going to be charged, that is going to come down the road.”

The construction has impacted businesses such as Oceans and Seas, a tropical fish, reef, reptile, and supply store in Roseville.

“We don’t get a lot of our Oakland County customers coming in like we used to,” said Dan Martin, a manager there. “They say they don’t head this way because the traffic is out of control.”

Delaying the project could still keep those visitors away, Martin added. “I definitely don’t see it changing from what it’s doing right now.”

In Oakland County, "weather permitting," this weekend should be the last time this year that eastbound I-696 is closed between Telegraph and I-75, MDOT said in a statement. That closure will begin Friday at 9 p.m. and end by 5 a.m. Monday.

For drivers who use I-75 to get from downtown Detroit to the Downriver suburbs, there's good news and uncertain news.

The good: "By mid-to-late November, we will have 75 completed from Springwells" to the south, Cross said. "The Rouge River Bridge will be finished."

The uncertain: I-75 between Springwells and Clark Street might not be fully reopened for winter if nature doesn't cooperate.

That's because concrete inlay work was timed so that drainage for the Gordie Howe Bridge could be laid at the same time, to avoid having to dig up the road twice, Cross said.

“We’ve combined those things," she said. "Unfortunately, those projects are more affected by the weather. We are going to do our absolute best to get it open. Right now it’s still the contractor’s role. We would like to try to, at least, if we could, get a couple lanes open in each direction.

"The fact that we are going to be going toward winter, if temperatures drop and the ground starts to freeze, that’s when we can’t pour concrete – there’s some parts you just can’t do,” Cross said.

The southbound I-75 lanes had been closed for nearly eight miles, from Springwells in Detroit to Northline in Southgate — forcing drivers to find alternate routes to reach destinations Downriver. But in late August, MDOT officials reopened southbound I-75 from Outer Drive on the Detroit/Lincoln Park border to Sibley Road to the south.

Northbound I-75 has always been open, but lane closures will continue while work is being completed on the Rouge River Bridge, MDOT said.

News of a possible construction extension did not please Randy Brown, longtime pastor at Military Avenue Church in Detroit, which is near the highway.

The ongoing work has affected those visiting the house of worship from across the region for tutoring and services, while more vehicles pass by on the nearby service drive and surrounding neighborhood streets, he said.

“It’s hard to get around. … It’s been going on for so long you get used to it, but it’s still not pleasant,” Brown said.

The $220 million effort to replace the concrete surface on the Rouge River bridge, fix road surfaces and replace or repair spans began in early 2017.

Read more: Part of SB I-75 reopens to Downriver motorists

Last month, 164 road projects across the state were stalled during a dispute between Operating Engineers 324 and the Michigan Infrastructure and Transportation Association, which locked out of the road engineers as part of a labor dispute.

The union and contractors association will use professional mediators throughout the winter to help negotiate a new contract, according to Gov. Rick Snyder, who personally met with both sides of the dispute.

The spring season typically starts in April or May, meaning the union and contractors association will have several months to negotiate a long-term deal after crews complete work without a contract this year.