“I will do anything you want,” Schuette tells a woman in the 1989 clip. “Some things I may not let you run the camera on.” 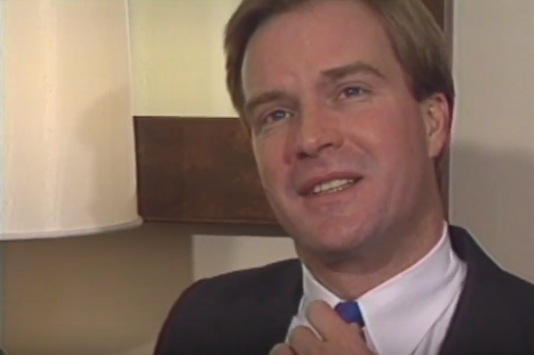 Lansing — Michigan Republican gubernatorial hopeful Bill Schuette said this week he is embarrassed by and regrets his "poor attempt to be humorous" during an exchange with an unidentified woman ahead of a 1989 interview.

American Bridge, a Democratic group specializing in opposition research, published the archival outtake online Thursday but was unable to provide additional context. The 38-second clip begins with a woman who is off screen and never seen asking Schuette to move closer to a lamp.

“I will do anything you want,” said Schuette, who was an elected member of the U.S. House of Representatives in 1989. “Some things I may not let you run the camera on.”

The woman then says something inaudible, and Schuette responds.

“I admire your tenacity, appreciate your spirit of Vincent Van Gogh, Rembrandt and Toulouse-Lautrec.”

A slightly shorter version of the clip appears to have been posted online in July by a conservative news site that has usually published stories friendly to Schuette. The American Bridge version quickly spread online Thursday and generated strong reactions among Democrats and their allies.

Women are subjected to “creepy behavior like this” every day when they go to work and try to do their jobs, said Lori Carpentier of Planned Parenthood Advocates of Michigan PAC, which has endorsed Democrat Gretchen Whitmer for governor.

“It wasn’t funny then. It’s not funny now,” she said in a statement.

Schuette’s campaign said he did not know the origin of the video and does not recall the apparent interview it came from. But he watched it recently and responded late Wednesday before the Democratic group had published its version of the clip.

"That apparently was my poor attempt to be humorous 30 years ago,” Schuette said in a statement, noting the clip was edited to show only one short portion of an exchange that "has been in the public domain for some time."

“It’s fortunate for me that Cynthia came into my life and let me know that I am not a very funny guy, but this is no less embarrassing to me today, and I regret it."

Whitmer responded to the video online.

"I imagine everyone who’s watched it had the same uncomfortable look on our faces,"  she wrote on Twitter. "But even more troubling is the fact that Schuette has spent the past 33 years in office attacking the rights of women and working to take away our access to contraception and health care."

A spokesman for American Bridge said the group does not have any additional footage from the interview.

The clip was “sent to us via a file sharing service by someone who gave us an assumed name,” Zach Hudson told The Detroit News in an email. “We don’t know anything beyond what is in this video.”