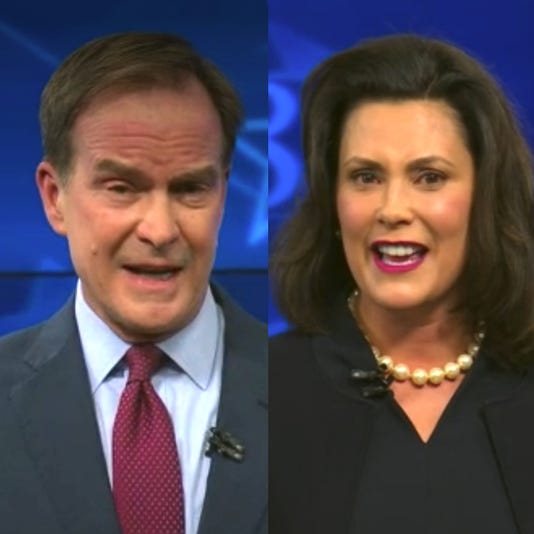 Whitmer, the former state Senate minority leader from East Lansing who has led recent polls, framed herself as a pragmatic problem solver with concrete plans who is willing to work across the aisle.

“Bill Schuette’s plan is two steps,” she said. “Get elected and figure it out.”

Schuette vowed to be a “paycheck” governor, touting his plan to cut the state's personal income tax rate while arguing that Whitmer would be a sharp deviation from recent Republican rule that has coincided with economic gains.

But both campaigns entered the debate nursing wounds. Schuette this week was embarrassed by archival footage of an exchange with a woman that critics called “creepy.” Whitmer running mate Garlin Gilchrist III was facing criticism — and a clean-up order by the city — for a blighted duplex apartment he owns in Detroit.

Schuette suggested the 1989 video clip was heavily edited and called it a "Planned Parenthood, Democrat hit job on me." He quickly pivoted to Gilchrist, saying he was more interested in a video of a Detroit neighbor demanding the Democratic lieutenant governor candidate fix up his vacant building.

Whitmer said after the debate that her campaign had known about Gilchrist's property but was not fully aware that immediate action was needed. "He's doing his best to get it remedied, and I'm confident he will," she said.

Schuette’s wife Cynthia, a former WOOD-TV news anchor, downplayed the archival footage of her husband while standing beside him after the debate. Many people have made comments they regret 30 years later, she said, calling his interaction with the woman in the video “silly, flirtatious and stupid.”

Schuette came out ahead in the debate, if only marginally, said Bill Ballenger, an analyst and former GOP legislator. But he questioned whether the Friday night forum would be enough to help Schuette rise in the polls.

“I just find it very hard to believe that the debate is going to change very many minds,” Ballenger said.

The Midland Republican said he wants to make Michigan “a jobs state, a paycheck state, and a growth state.” Residents already lived through “one lost decade” under former Gov. Jennifer Granholm," he said, calling Whitmer a "disciple" of the Democrat who left office eight years ago.

“Massive tax hikes which would crush job creation, more mandates that would stop economic growth and government-run health care,” he said. “We can’t go back.”

“I’m proud of that work, but make no mistake, health care is on this ballot for governor because my opponent field nine lawsuits to repeal the Affordable Care Act,” she said. “He apparently didn’t think eight was enough. He used our taxpayer dollars to try and rip health care away from people.”

Schuette said the federal health care law known as Obamacare “didn’t work” and explained that he filed lawsuits because of its “unconstitutionality.”

“But every time I did, I said I supported continued protections for people with pre-existing conditions,” Schuette said, accusing Whitmer of being a “captive of big insurance.”

She is the daughter of a former Blue Cross Blue Shield of Michigan chief executive and has accepted political donations organized by the state's largest insurer. The Blue Cross political action committee has also donated to Schuette.

Whitmer fired back, telling Schuette “you’ve been in office for 33 years and you’ve never done a darn thing to expand health care access for anyone in this state.”

In a separate exchange on education, Schuette accused Whitmer of doing little during her time in the state Legislature, where only three bills she sponsored were signed into law. He accused her of being a “captive” to the education establishment in Lansing.

Noting she was a member of the minority party throughout her tenure, Whitmer said Schuette “and Betsy DeVos are the establishment of this state,” referencing the U.S. secretary of education who helped push school choice and charter school policies in Michigan.

With emerging chemical contaminants like PFAS threatening water supplies around the state, Whitmer said she would create a Department of Great Lakes and Fresh Water to focus on clean water efforts. She didn't say what would happen to the Department of Environmental Quality.

She said she’d also appoint a water ombudsman “to make sure that when someone complains, they won’t be ignored for two years,” jabbing Schuette over complaints launched by Flint residents dating back a year before he launched a criminal investigation.

Schuette said he wouldn’t apologize for his Flint investigation, which has led to charges against 15 local and state officials and some plea deals, and emphasized his dedication to justice for the families there.

“Flint is a city where too many people played politics with people who lived there,” Schuette said.

Whitmer said she would “expedite the replacement of pipes” and accused Schuette of delaying action in the city early on in the lead contamination crisis. Flint leaders say they expect to replace the lead pipes in the city in the next couple of years with federal money. 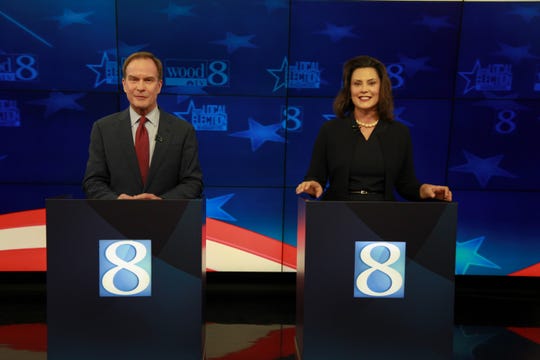 Schuette said he’d also work to fight water contaminants and praised a proposed tunnel to house the Line 5 oil pipeline in the Straits of Mackinac.

But “Whitmer wants to build more government,” he argued.  We just need to have government run properly. No more taxes.”

On roads, Schuette said Whitmer’s plan to spend $2 billion a year on additional fixes would force a major gas tax increase, calling it an “extreme agenda.”

As part of her plan to fix roads and other aging infrastructure, Whitmer has said she'll ask the Legislature to approve new user fees, such as gas taxes or registration fees. If lawmakers refuse, she has vowed to push a statewide ballot proposal for bonds the state would eventually have to repay with interest.

Schuette said he wants to fix roads without increasing taxes by re-prioritizing existing state spending, a proposal some experts believe is unrealistic given his separate push for a $1 billion income tax cut.

Both candidates said they would repeal the 2011 pension tax and touted their support from different law enforcement associations affected by the tax.

Schuette touted his work to ensure survivors could share their “profiles in courage” during the sentencing for former Michigan State University gymnastics doctor Larry Nassar, and criticized Whitmer for failing to tackle the case while interim prosecutor in Ingham County.

“You didn’t do your job,” Schuette said.

Whitmer said she allowed the attorney general’s office to handle the case because they were best positioned to do so. She asked Schuette to stop using the case as a campaign issue.

“I’m proud of the work that we did, but we need a governor who is going to step up for survivors,” Whitmer said.

“She told the truth about the Nassar prosecution,” Miles said after the debate. “Bill Schuette did not. Gretchen Whitmer did her job.”

Schuette said the country needs a hopeful and welcoming immigration policy, not one that allows for sanctuary cities. He said Whitmer would create a “sanctuary state” and wants to get rid of the Immigration and Custom Enforcement agency.

“We need to make sure we have a set of rules and everyone plays by the rules,” Schuette said.

Whitmer denied wanting to abolish ICE because “you know what that doesn’t fix the problem. The problem is in the White House.”

Schuette again noted Whitmer spent 14 years in the Legislature and “did nothing” to lower auto insurance rates. Whitmer noted that as attorney general for the past eight years, Schuette could have worked to stop price gouging, suggesting he might have taken action to lower rates “if cameras had shown up.”

Before the debate, a small band of Democrats rallied outside WOOD-TV studios in Grand Rapids.

Democrats protesting Schuette held posters of the Midland Republican and various signs alongside a towering Papier-mâché version of the attorney general.

Hollie Stephenson, a teacher from Greenville whose college-age son was born with a heart defect, said she’s backing Whitmer because she believes the former senate minority leader from East Lansing will fight to “protect” health care in Michigan and fight for affordable access.

“He’s now a college freshman,” Stephenson said of her son. “His worry is, what kind of a job am I going to be able to get where I have health care. And the answer to that is what happens in the next few years nationally, but also here in Michigan.”

Inside, audience members invited by each of the campaigns looked on as WOOD reporter Rick Albin asked candidates questions.

Whitmer and Schuette have agreed to participate in a second televised debate on Oct. 24 in Detroit, where WDIV anchors Devin Scillian and Kimberly Gill will ask the questions in a one-hour forum that starts at 8 p.m.