This report is the first time that UM has released details of sexual misconduct complaints involving faculty, staff and third parties 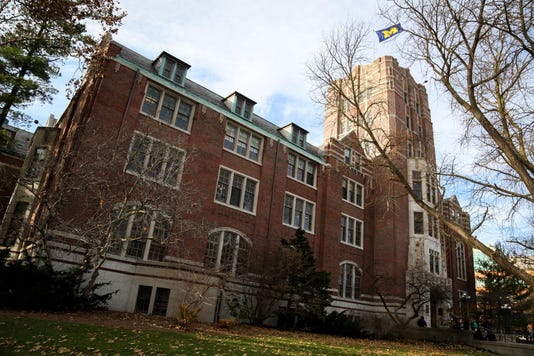 University of Michigan has received $20 million from a foundation to boost its collaboration with two Israeli research institutes.(Photo: Associated Press)

Complaints of sexual misconduct at the University of Michigan involving faculty, staff and third parties spiked from 90 to 235 reports last year, according to the school's first report of its kind, released Monday.

For five years, UM has released annual reports detailing sexual misconduct complaints to the UM Office for Institutional Equity from students and how they were handled.

But this report is the first time UM has released details of sexual misconduct complaints involving faculty, staff and third parties while they were on campus or participating in a university program or activity. In the future, the university plans to release one report that details sexual misconduct involving students, faculty, staff and third parties.

The new report showed that investigations involving faculty, staff and third parties focused exclusively on sexual harassment, defined in the report as "unwelcome sexual advances, requests for sexual favors, and other verbal or physical conduct of a sexual nature."

“We share this information in order to be transparent, to acknowledge that these behaviors occur within our community, and to show how the university responds to sexual misconduct,” said Jeff Frumkin, associate vice provost and senior director of academic and human resources, in the report. Frumkin also is interim senior director of the Office for Institutional Equity and Title IX coordinator.

“These behaviors have no place at Michigan, and we encourage every member of our community who has concerns about sexual misconduct to reach out,” he said.

The report comes as UM President Mark Schlissel announced in September a new awareness campaign to address sexual misconduct and educate the entire UM community — including UM-Dearborn, UM-Flint and Michigan Medicine — along with the development of training for faculty and staff.

It includes complaints from July 1, 2017, to June 30, 2018, on sexual misconduct that include behaviors such as assault, harassment and stalking and fall under UM's Sexual Harassment or Violence in the University Community policies.

The report attributed the spike in reports from 90 to 235 to "the result of our community’s enhanced awareness of these issues, how to report concerns, and ongoing training efforts."

Of the 235 reports, 26 were investigated by OIE; 18 of the investigations had been completed as the report was issued.

Of the other reports, 124 led to "consultations" by the OIE, which occur without a review or investigation and can be addressed, according to the report.

A review was conducted in 82 complaints. A review is done when there is not enough information for an investigation, such as the complainant’s and respondent’s identities.

"In these instances, OIE seeks available information so that the matter either can proceed to investigation or be addressed in another appropriate manner," according to the report.