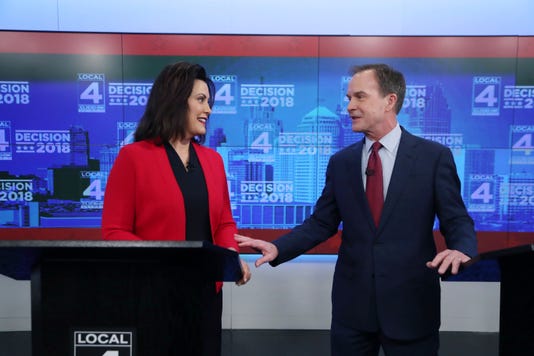 Whitmer has led Schuette in recent polls but was the early aggressor in the debate, suggesting the attorney general “shows up when the cameras are on, but when no one’s watching, he makes decisions that hurt us.”

The former Senate minority leader from East Lansing criticized Schuette for joining lawsuits to fight the Affordable Care Act and defending Michigan’s same-sex marriage ban that was ruled unconstitutional in 2015 by the U.S. Supreme Court.

Schuette, who needs to gain ground on Whitmer with the Nov. 6 general election less than two weeks away, touted his tax cut plan and argued Whitmer's spending proposals would require job-killing tax increases.

At one point, the Midland Republican called his opponent “Jennifer Whitmer,” conflating her with former Michigan Gov. Jennifer Granholm, a Democrat who left office at the end of 2010 after several years of economic strife.

“The election, it’s upon us right now,” Schuette said, “and the question for Michigan is, will we go forward or will we go backward?”

Whitmer and Schuette debated in Grand Rapids in mid-October, but Wednesday night’s high-stakes debate was their only contest to air in the massive Detroit television market.

Schuette appeared to “stammer over his talking points, and there weren’t very many of them,” said Adrian Hemond, a Democratic strategist with the Grassroots Midwest bipartisan consulting firm.

“He needed to do something to change the trajectory of this race, and if he did, it wasn’t good,” Hemond said.

The debate was a “regurgitation” of the first debate, months of ads and a year of press releases, said Bill Ballenger, a former Republican lawmaker who writes The Ballenger Report.

Should Whitmer win office, the state will be in gridlock for four years with a Democratic governor, a Republican Senate and perhaps a GOP House, he said.

“That’s what’s missing in this entire discussion or debate that nobody talks about,” Ballenger said.

The seasoned politicians ridiculed each other for failing to fix state problems despite many years in public office, using their experience as ammunition against each other.

Schuette, a former congressman who also served in the state Legislature, said Whitmer has been “part of the establishment for Lansing for 14 years but passed only three bills” and did little to stop escalating auto insurance rates.

Whitmer questioned how Schuette could call her part of establishment when he’s “literally been in office for 33 years.” As attorney general, he didn’t initiate a single lawsuit to fight auto insurance price gouging, she said.

“I’ve been on the front lines fighting for consumers because our attorney general, Bill Schuette, didn’t do his job,” Whitmer argued.

Republican Bill Schuette says he made a "slip of the tongue" when he called Democrat Gretchen Whitmer "ennifer Whitmer." The Detroit News

Whitmer said her first budget as governor would call for $2 billion in new spending to fix the "damn" roads, suggesting her plan could generate an additional $1 billion in matching funds from the federal government. She has proposed new user fees or bonding to fund road fixes and said drivers are now paying a  “Republican roads tax” in the form of busted tires, chipped windshields and vehicle damage.

Schuette has not proposed any new funding for roads but said he’d implement an audit of the Michigan Department of Transportation, require guarantees and warranties for our road and bridge work, and garner more federal funding for Michigan roads.

“Every aspect of government is going to chip in because roads will be a priority,” Schuette said.

On climate change, Whitmer said she would enter the state into the U.S. Climate Alliance with other governors. Whitmer criticized Schuette for trying “to rewrite his record” on climate change.

Schuette said every nation including China must be part of the solution to address climate change, "but it can’t just be the United States.”

On immigration, Schuette said immigration policy needs to be “hopeful and welcoming” while ensuring immigrants follow the rules and the country’s borders are protected. Schuette said he would not allow sanctuary cities, but accused Whitmer of planning to create a “sanctuary state.”

Whitmer called the allegations “nonsense” from a “desperate campaign.” She said the state was built on immigrants and it remains a strength for Michigan.

“I will not stand silently by when the Trump administration separates kids from their parents,” Whitmer said.

Asked about the Flint water crisis and whether he would allow Nestle to continue to bottle hundreds of gallons a year in Michigan water, Schuette accused Whitmer of doing little for the environment during her tenure in the state legislature.

The only bill she passed related to water was “something about swimming pools, and that doesn’t help families in Flint,” he said.

“In the 21st  century, we can have economic development and we can have water that is produced by Nestle.”

Whitmer called his response the “kind of gobbledygook” that voters are tired of. Nestle “should not be taking our water out of ground and selling it, and I want to stop that,” she said, also vowing to shutdown Enbridge’s Line 5 oil pipeline in the Straits of Mackinac.

Whitmer said she would offer options to high school students to allow them to gain job-ready certifications and implement a program that would allow students to get their first two years of higher education for free.

Schuette said he would improve job prospects through tax cuts and promote skilled trades training for Michigan students. He then criticized Whitmer for programs that would result in higher taxes for Michiganders, comparing it to the “lost decade” of Granholm.

When asked about the thousands of victims who were falsely accused of unemployment insurance fraud by the state between 2013 and 2015, Schuette said victims “should be made whole.”

“He went after and is still pursuing people who were falsely accused of fraud in our state,” Whitmer said.

Whitmer has repeatedly touted her role in working with term-limited GOP Gov. Rick Snyder to expand Medicaid under the Affordable Care Act. But Schuette said she did “no heavy lifting” by securing Democratic votes for a bill they were already likely to vote for.

Whitmer countered Schuette’s repeated attacks that she did little in the Legislature by noting she served in the minority party for her full 14 years in Lansing, making it difficult to pass legislation. “He blames me for everything that happened under Republican control,” she said.

The 47-year-old Democrat said she supports the expansion of the Elliott-Larsen Civil Rights Act to further protect the lesbian, bisexual and gay community. Schuette said he was brought up to treat everyone with “grace, dignity, respect and honor” and will bring those principles into the governor’s office.

Schuette said he opposes Proposal 2, an effort to create a citizens redistricting commission. Whitmer said she will support the proposal to avoid the currently "rigged" system that “has contributed to this environment where one family decides education policy in the state.”

Union members and other Democratic activists rallied outside the venue ahead of the debate, protesting Schuette’s health care policy and advocating for a $15-an-hour minimum wage. Whitmer addressed the crowd before entering the WDIV building.

“Schuette, hands off our healthcare,” Donavan McKinney of SEIU Michigan said, referencing a series of lawsuits the attorney general joined to challenge the federal Affordable Care Act. “We represent the fight for $15, the right to health care no matter who you are. These issue matter to us and our union, and Gretchen Whitmer is that person that represents us.”

The Michigan chapter of Americans for Prosperity, a conservative advocacy group, parked a moving truck outside the television station with Whitmer’s image emblazoned on the side and a mock message: “Specializing in policies that move jobs out of Michigan.”

In a Sept. 30-Oct. 2 poll, Whitmer led Schuette 47 percent to 35 percent with third-party candidates combined getting support from 5 percent of the 600 likely voters. About 13 percent were undecided in the poll, which had a margin of error of plus-minus 4 percentage points.

The two candidates are also scheduled to make separate appearances next Wednesday before the Detroit Economic Club. At the noon luncheon at the MotorCity Casino Hotel's Sound Board theater, each candidate will be on stage to answer audience-submitted questions.