Game camera for monitoring deer movement captured the image of the cougar on Oct. 1 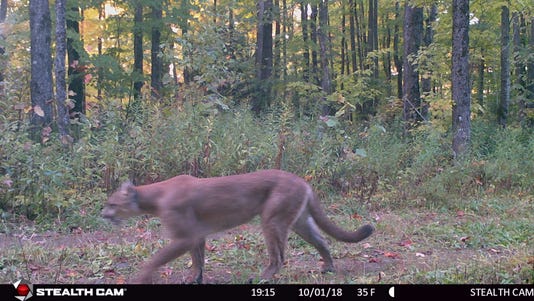 A cougar has been spotted by a game camera meant to monitor deer movements in Michigan's Upper Peninsula, state officials said Thursday.

Officials with the Michigan Department of Natural Resources said their staff has reviewed and verified the images.

They said the camera is located in Gogebic County, about nine miles north of Ironwood. Ironwood is about 600 miles northwest of Detroit. The camera captured images of the cougar at 7:15 p.m. on Oct. 1

“This latest confirmed report illustrates just how rare cougars are in the Upper Peninsula,” Brian Roell, a department wildlife biologist based in Marquette, said in a statement. “This is the first time we’ve ever caught a cougar on more than three million game camera images we’ve collected in our studies since 2009.”

The latest pictures of a cougar show the animal walking past the camera, from right to left.

Officials said the cougar did not have a tracking collar and they couldn't determine its sex. 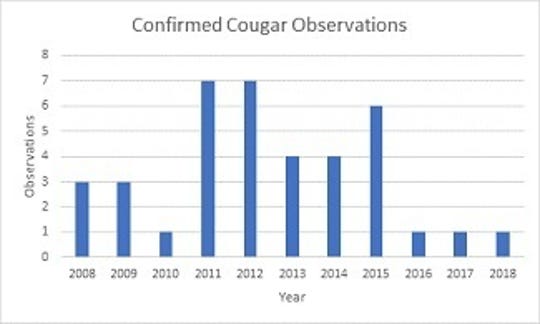 Department officials said they have confirmed 38 cougar reports in Michigan since 2008, with all but one of those occurring in the Upper Peninsula. They said the reports include multiple sightings of the same cougar, not 38 individual animals.

They said there is no conclusive evidence of a cougar population breeding in Michigan. Cougars are an endangered species in Michigan protected by law.