Democrats bet on women in quest to flip Michigan Legislature

Michigan Democrats are betting on female candidates to overcome Republican GOP advantages in the state House and Senate.

Democrats bet on women in quest to flip Michigan Legislature 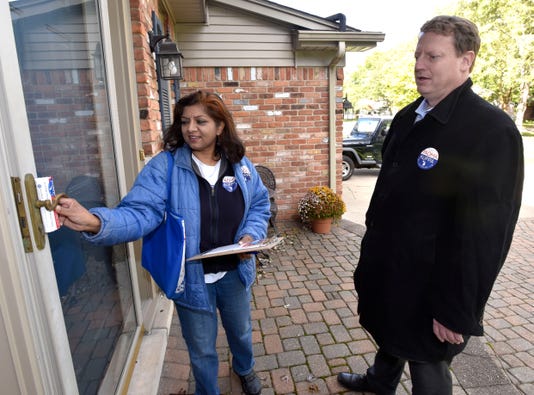 Padma Kuppa, a Democrat running for the 41st state House District that includes Troy and Clawson, puts a flyer in a door while campaigning in Troy with Tim Greimel, minority leader of the state House.(Photo: Todd McInturf, The Detroit News)Buy Photo

Padma Kuppa didn't decide to run for the Michigan House because of her gender, but the “sisterhood” she’s found among Oakland County candidates could be critical in Democratic efforts to win control of the state Legislature.

Kuppa, a 53-year-old from Troy, is among 10 female candidates in the top 13 target races for House Democrats. The minority party needs to flip nine seats to overcome a 63-47 advantage for Republicans, who have controlled the lower chamber since 2010.

Democrats face a more daunting task in the Senate, which Republicans have controlled since 1984 and now dominate with a 27-10 majority. But less than two years after the Women’s March, Senate Democrats have women running in seven of their top nine target seats and hope to make significant gains in a midterm election that could serve as a referendum on GOP President Donald Trump.

“It’s really been good to have the camaraderie of other women, but that is not the reason I ran,” said Kuppa, an engineer who has worked in information technology and the auto industry, most recently for Ally Financial. “The reason I ran is because, as my daughter put it, it’s sort of the next step in my civic engagement over the last 20 years.”

Voters he talks to “may mention whatever they happen to hear in the news that day,” Tietz, 37, said when asked about Trump. “But most times people want to tell me about how much they’re paying for auto insurance or how difficult it is being self-employed and having to pay for your own health insurance.”

Two years after his narrow statewide win, Trump’s approval rating is underwater in affluent and educated areas such as suburban Oakland County, especially with women. Experts say his shadow looms large there and in western Wayne County, communities that could be the crest of any “blue wave” that develops for Democrats.

Amid the backdrop of national turmoil and political division, both Kuppa and Tietz are promoting themselves as problem solvers fit to represent the swing district. And they’re stressing local issues.

It can be hard to cut through the “national noise,” Kuppa said. But the first-generation Indian immigrant and self-described “minivan mom” said that after sharing her background with voters, they are “ready to engage on local issues” such as  education, roads and clean water.

“I feel very strongly that politics is local, and that’s where we can make the most change.” 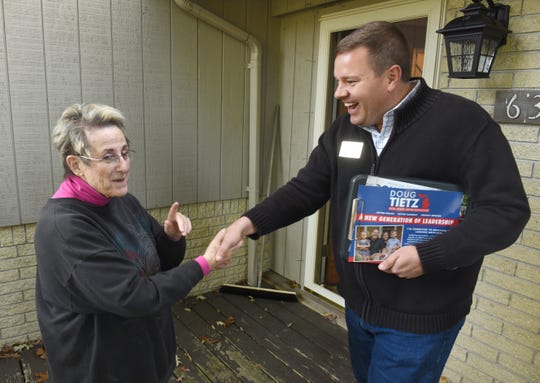 Republican Doug Tietz, a candidate for the 41st Michigan House District seat that includes Troy and Clawson, shakes hands with Sally Raffler of Troy, as he campaigns in her neighborhood. (Photo: Max Ortiz, The Detroit News)

While voters may be frustrated with the federal government, they “know the difference between congress and the state Legislature,” which plays a major role on issues like road repairs, Tietz said.

“There’s no such thing as a Republican road or a Democratic road. It’s just our road. It’s part of the reason people are frustrated with politics. We’ve got to get things done.”

Battle for the House

Republicans have had complete control in Lansing since 2010, but Democrats expect that voters are ready for change. Democrat Gretchen Whitmer has consistently led Republican Bill Schuette in polls of the gubernatorial election, and the party that controls the White House typically suffers losses in midterm elections.

“Folks on our side are engaged and excited,” said Rep. Kevin Hertel  of St. Clair Shores, co-campaign chairman for House Democrats. “We just need to do our job to make sure folks are turning out to vote. If we do that, we have a really good shot at taking back control of the state House.”

Democrats suffered a major setback in October, when 39th District candidate Jennifer Suidan was accused of embezzling tens of thousands of dollars from the campaign account of Oakland County Treasurer Andy Meisner. Suidan was charged this month but her name remains on the ballot. If she wins, she is unlikely to be seated in the Legislature.

House Republicans contend their base is coming alive as the election nears and are confident that dynamics in northern Michigan and Macomb County — where Trump remains popular — will continue trending in their direction.

"I don't want to get in the business of making predictions, but things are looking good," said Gideon D'Assandro, a spokesman for the House Republican Campaign Committee.

They majority party is emphasizing "pocket book issues" and economic gains during the past eight years under GOP leadership, he said. " The people here really have a deep understanding of the value of the economic turnaround and how much better Michigan is doing now than it was a decade ago," D'Assandro said.

Whitmer has led Schuette in recent polls of the governor’s race, and “if she wins by 10 points, it’s going to be a bloodbath for Republicans up and down the ballot,” said Adrian Hemond, a Democrat and partner at the Grassroots Midwest bipartisan consulting firm.

But Hemond expects that key top-of-the-ticket race will tighten and is predicting Democrats will not win enough seats to flip either the state House or Senate.

GOP voters are likely to “come home” in the late days of the campaign, said Brain Began, a Republican strategist at Grassroots Midwest, who agrees that Democrats are unlikely to regain legislative control even if Whitmer wins.

While the minority party may flip seats in Oakland and western Wayne counties, Republicans are finding new strength with blue-collar workers in places like Macomb County and rural voters in northern Michigan and the Upper Peninsula.

“No area in the state has shifted further right than the UP,” Began said. Democrats “could win eight or nine seats downstate but still have a net gain of seven.”

Term limits will upend the status quo in the state Senate, where nine of 38 members are eligible to run for re-election. Open seats mean more opportunities for Democrats, but Republicans are confident they'll retain control.

“It’s impossible for us to lose the majority, and we’re competitive in every race,” said Sen. Mike Shirkey, a Clarklake Republican who is the odds-on favorite to become Senate majority leader next session.

Trump is a factor in down-ticket races, he acknowledged, but Republicans are making the case to voters that the state has seen too much progress under GOP leadership to change course now.

It’s a message that has been resonating “particularly well with moms and grandmas,” Shirkey said.

“We’ve got a president who is getting things done — in my mind, almost all the right things — but he tends to be polarizing. And what I ask folks to be cautious about, you may have angst with my president but don’t waste your vote on that this time, because this vote is about Michigan, not the president.”

"What we're seeing is that especially among women, there's been a dramatic shift towards our candidates," he said. "I think a lot of it has to do with Trump, but another part has to do with the fact that we've recruited strong female candidates in those areas."

Those dynamics are evident in the 13th state Senate District, where both parties are spending heavily as Democratic challenger Mallory McMorrow of Royal Oak takes on incumbent Sen. Marty Knollenberg of Troy, and in the 12th District, where Republican state Rep.Mike McCready of Birmingham is running against Democrat Rosemary Bayer in a district currently held by state Sen. Jim Marleau, R-Lake Orion.

"There are more seats in play (for Democrats) than there ever have been," Hertel said. "The seats were gerrymandered, but they were drawn in a way to try to keep a super-majority, so a lot of seats that lean R in a good Democratic years could go our way."

The most likely scenario for Democrats is picking up about five seats and chipping away at the GOP edge, Hertel said, "but if turnout is great and people vote, I think that certainly a majority is possible."

Shirkey said the Senate GOP is most excited about the prospect of holding competitive seats like the 10th District in Macomb County, where GOP candidate Michael MacDonald is competing with state Rep. Henry Yanez, D-Sterling Heights, and the closely watched 38th District race in the Upper Peninsula between Democratic state Rep. Scott Dianda of Calumet and former GOP Rep. Ed McBroom of Vulcan.

"I like our odds. We could actually come back with 26 or 27 (members), but a lot would have to fall into place for that to happen."

The Senate Republican Campaign Committee outspent its Democratic counterpart by more than $1 million between July 21 and Oct. 20, according to campaign finance reports filed Thursday. The GOP operation has spent $3.8 million for the cycle, compared with $2.7 million by the Michigan Senate Democratic Fund.

The House Republican Campaign Committee had spent $3.1 million defending its majority this cycle, while the Michigan House Democratic Fund had spent $2.6 million. Candidate fundraising reports are due by the end of Friday.