Young voters turned out in larger numbers for the midterm election than any time in recent history, thanks in part to campus registration drives 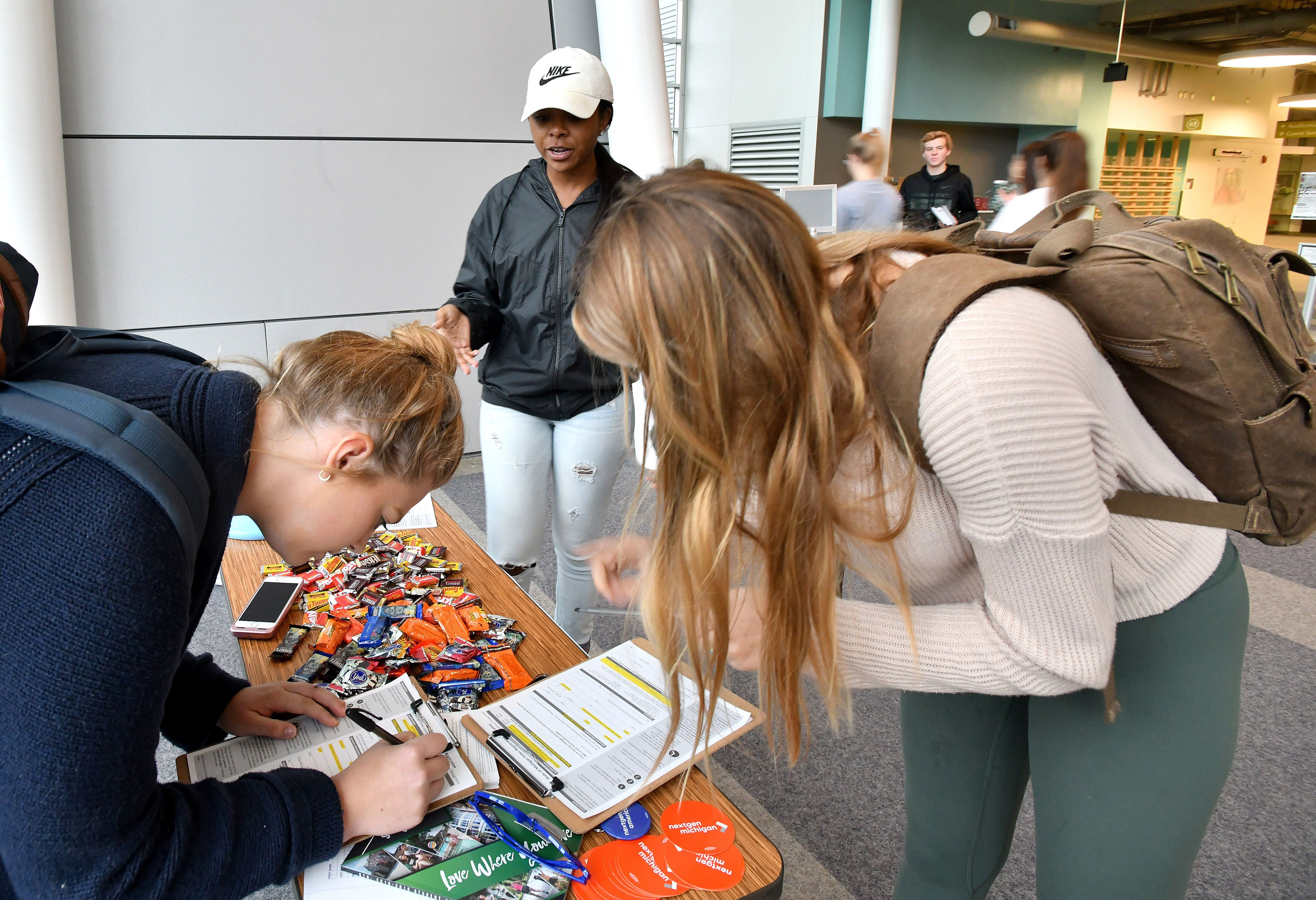 Young Michigan voters turned out in larger numbers for the midterm election than any time in recent history, thanks in part to campus registration drives by the state and activist groups.

With about 80 percent of the voting history complete for 2018, data from the Michigan Bureau of Elections shows the percentage of voters ages 18 to 24 increased across every county from 2014. That was consistent with higher overall turnout that set a Michigan midterm record with 4.3 million voters.

“There was a lot for voters to decide and there were a lot of very competitive races,” said Fred Woodhams, communications director at the Michigan Secretary of State. “That helped spark interest among young people and voters of all ages.”

More than 2,100 college students registered to vote this fall during a 3,000-mile, 18-campus tour by the Secretary of State's office. Voters under 24 now represent about 8 percent of Michigan's 7.5 million registered voters.

Vote turnout quadrupled at Michigan State University’s on-campus precincts, jumping from 826 voters in 2014 to 3,496, according to the East Lansing City Clerk's office.

Meanwhile, participation at the University of Michigan campus precincts tripled, with 6,258 voters showing up at the polls compared with 2,442 voters in 2014, according to the Ann Arbor City Clerk's office. At Wayne State University, the Wayne County Clerk's office reported that turnout doubled from 152 voters to 335 at precinct 152, the closest precinct to campus.

“When young people understand that their votes have a huge impact on their lives, they will continue to vote and stay politically involved,” said Eliza Webb, state young director for NextGen Michigan, the local chapter of national voter advocacy group NextGen America.

Michigan law requires voters to vote at the polling place associated with the address on their driver’s license, which can be an impediment for college students. Since many do not officially change their address, they have to go home to vote, which can be challenging with school and work schedules.

As a result, this fall College Democrats at the University of Michigan and Michigan State University sued in federal court to challenge a 1999 law and 2004 statute. The case is scheduled for a status conference on Jan. 9.

The two laws can confuse young voters and unfairly deny them the right to vote, according to the lawsuit. “As a consequence, young voters in Michigan vote at very low rates: the difference between overall turnout and youth turnout is now larger in Michigan than in any other state,” College Democrats argued in the filing.

At the time the suit was filed, Woodhams said Secretary of State Ruth Johnson's office was surprised by the "odd" lawsuit, adding that the address-match law was litigated nearly two decades ago in federal court.

“Separating a person’s address for voting and licensing purposes would cause confusion and lead to different addresses for people who thought they had changed both,” he said at the time.

Ingham County Clerk Barb Byrum, a Democrat, was one of several clerks who supported the lawsuit. “These restrictions have had a devastating impact on the ability of student voters to exercise their right to vote for more than a decade,” Byrum said in a statement.

Campus leaders made registration and turnout a priority this year in Michigan.

University of Michigan President Mark Schlissel challenged the presidents of all 14 Big Ten schools to a friendly, nonpartisan competition to increase voter registration and turnout.

That call prompted Edie Goldenberg, a UM professor of political science and public policy, to create Turn Up Turnout. More than 60 students and faculty worked together to create social media campaigns and public service announcements designed to increase voter registration and turnout.

They also created the “90% Pledge,” which asked student organizations to pledge that at least 90 percent of their members would register to vote.

“There was a significant increase in (UM's) campus turnout because of heightened interest by young people in having their voices heard on issues such as immigration, gun control and the environment,” Goldenberg said. “The Big Ten Voting Challenge encouraged students to lead the way in planning activities that would interest fellow students and encourage them to register and turn out to vote.”

At Wayne State in Detroit, groups worked to eliminate the transportation and timing barriers that student voters face on Election Day.

The Student Senate partnered with the Detroit Department of Transportation to bus students to the polls, while NextGen Michigan coordinated shuttles to and from campus to precinct 152. Student volunteers also drove voters not only to precincts in Detroit, but also to precincts outside of the city.

“Observing all the effort on campus by numerous organizations including the university felt great because others were understanding the importance of this very issue and were also advocating voting and certain issues,” said Kel Righter, who is a sophomore at Wayne State University. “It was amazing and refreshing that others were noticing the efforts made on campus.”

In Lansing, the student governing body, Associated Students of Michigan State University, created “Party at the Polls,” to encourage students to vote. They allocated $1,000 to purchase food and decorations for on campus precincts, and on Election Day they distributed food and answered questions about the ballot.

“Our goal was to create a celebratory environment around voting,” said senior Eli Pales, who is the vice president of governmental affairs for Associated Students of Michigan State University. “Often times if you vote once, you are more likely to vote again, especially if you have a pleasant experience voting, so we want to make sure that people have an enjoyable voting experience.”