Over 160,000 Michigan small firms employing more than 1 million workers would be exempt from providing paid sick leave under GOP bills 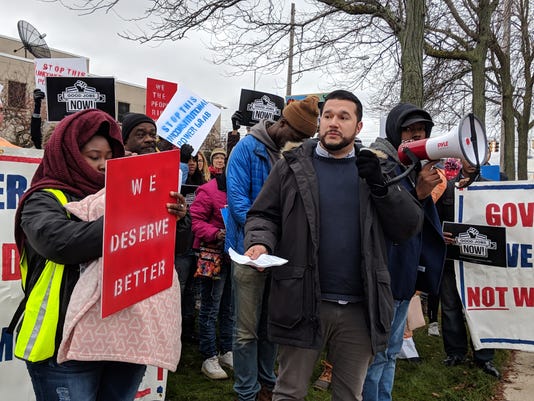 Art Reyes of We The People leads a protest outside the Michigan Chamber of Commerce in Lansing on Dec. 3, 2018, over proposed changes to minimum wage and paid sick leave initiatives.(Photo: Jonathan Oosting)

Lansing — More than 160,000 Michigan small businesses that collectively employ more than 1 million workers would be exempt from providing paid sick leave to their employees under Republican legislation to amend an initiated law that has not yet taken effect.

The GOP-led state Senate voted last week to overhaul paid sick leave and minimum wage laws legislators adopted in September to keep them off the Nov. 6 ballot and make them easier to change.

Supporters say the Senate plan would fix an “unworkable” paid sick leave law that could cripple Michigan businesses. But critics contend the changes undermine the spirit of the initiative by eliminating the guarantee for workers at companies less likely to provide paid time off for a personal or family illness.

With the state House set to vote as early as Tuesday on the sick leave and minimum wage amendments, activists gathered Monday at the Michigan Chamber of Commerce to protest "cowardly attempts to gut" the laws. And sponsors of the earned sick leave petition drive filed paperwork to start another petition drive for a 2020 ballot proposal.

"People get sick," said Danielle Atkinson, co-chair of the MI Time To Care ballot committee. "They deserve to stay at home and get well and take care of people that they love. And it should be regardless of who they work for."

In one of several major changes proposed for the paid sick leave initiative, the Senate bill would exempt any small business with fewer than 50 employees.

As of 2015, 162,003 Michigan companies had 49 or fewer employees, according to the most recent data available from the U.S. Census Bureau. Those firms, which include self-employed owners who would already be exempt under the initiated law, had a combined 1,004,987 workers and annual payrolls totaling $38.9 billion.

The change would make the state law consistent with the federal Family and Medical Leave Act, which requires companies with 50 or more employees to provide workers with up to 12 weeks unpaid leave, said Senate Majority Leader Arlan Meekhof, R-West Olive.

“So it’s a complete disappointment that the Senate has changed what would have been a very inclusive sick time policy to one that has very little benefit for the majority of the people that need it," she said.

'This bill is a sham'

A majority of Michigan small businesses already provide some form of paid sick leave as well, said Charlie Owens, state director for the National Federation of Independent Business, who pegged the figure at around 70 percent. But those voluntary policies are narrowly tailored to fit the needs of each company, he said.

“The challenge for small business is that it’s easy for the government to impose these mandates, but that doesn’t just magically make the revenue appear to pay for them,” Owens said. “For a lot of these smaller employers, the choice is going to be cutting other benefits — and that includes pay — or cutting employees.”

The Senate legislation would also exempt workers at chain stores with less than 50 employees within 75 miles of each other, workers who have less than one year on the job, are covered by a union contract, work part-time or in fields like truck driving and long-distance sales, said Peter Ruark, senior policy analyst for the Michigan League for Public Policy.

All told, the exemptions could strip the guarantee of paid sick leave from 55 percent of Michigan’s work force, Ruark said, citing research from Brandeis University.

“This bill is a sham,” said Ruark, whose organization has promoted paid sick leave polices and has urged the Legislature not to amend the initiative. “This guts the intent and spirit of the paid sick leave law that voters were ready to approve in November if it had gone to the ballot.”

Michigan Chamber of Commerce President and CEO Rich Studley said the business coalition pushing changes to initiatives is not attempting to gut or repeal the mandatory sick leave initiative.

“We’re involved in an honest and sincere and good-faith effort to make it reasonable in comparisons with other states,” Studley said, noting most states do not have paid sick leave laws. The goal is to avoid an “impractical, unworkable law” pushed by out-of-state interests that “becomes a full-employment act for trial lawyers.”

Owens was less sympathetic to concerns over process.

"We never agreed with the spirit or intent of the initiative," he said about the Michigan chapter of the National Federal of Independent Businesses. The coalition includes the Small Business Association of Michigan and the Michigan Manufacturers Association.

Small businesses are often treated differently than larger companies in state and federal laws, Studley said. And many businesses with five or 25 employees do not have in-house attorneys to help navigate the mandated sick leave law or full-time human resources managers to implement it.

“We’ve accepted there’s going to be a state law in this area, and we want it to be reasonable, practical and workable for both employers and employees,” Studley said.

The Senate bill would also halve the minimum leave hours that employers would be required to provide, from 72 hours a year to 36 hours a year, and slow the benefit accrual, requiring employees to work 40 hours to earn one hour of medical leave, down from 30 hours in the law.

The initiative, which would take effect in March if the Legislature does not finalize amendments, already includes some concessions for small businesses. Of the 72 hours of leave employees could earn, companies with fewer than 10 employees would only have to pay for 40 of those hours.

Of the 10 other states with paid sick leave laws, only Connecticut exempts companies with fewer than 50 employees, according to a review by The Detroit News. But most states require up to 40 hours of paid sick leave per year, as opposed to the 72 hours sought in the Michigan petition drive.

Revisions approved by the state Senate would allow companies that are subject to the mandate to count as paid sick leave any hours they are already providing for personal time or vacation time. But many companies require employees to give a notice days or weeks ahead of using those hours, Ruark said.

“A person who calls in at the last minute because their child is sick would get penalized,” he said. “That’s a huge loophole.”

Most employees treat paid sick leave as a form of insurance, Ruark said. National data suggests employees who have access to the benefit only use a portion of the hours they are guaranteed, an average of about three days per year at large firms, he said.

The Michigan Legislature has never modified an initiated law in the same session it was adopted. Doing so would violate “the spirit and letter” of the initiative process, then-Attorney General Frank Kelley, a Democrat, wrote in a 1964 opinion that has not been tested in the courts.

Legal action is possible, said Mark Brewer, an attorney for the paid sick leave campaign and former chairman of the Michigan Democratic Party. "That's up to my client, but I think all options are on the table," he said.

Meekhof said last week he is confident the Legislature has the authority to amend the minimum wage and paid sick leave laws, which will be considered Tuesday in the Michigan House Competitiveness Committee.

"We want to make certain, one, that we are protecting the intent of these citizen-initiated laws but, two, protecting workers and protecting those jobs providers here in the state of Michigan," Leonard said last week.

If all four employees of a landscaping company decided to "collude and call in sick on one day, it could essentially shut down a small business," Leonard said. "We don't want to see that happen."