A decade after voters approved embryonic stem cell research, UM has created 57 lines, including 36 disease-specific lines on a federal registry 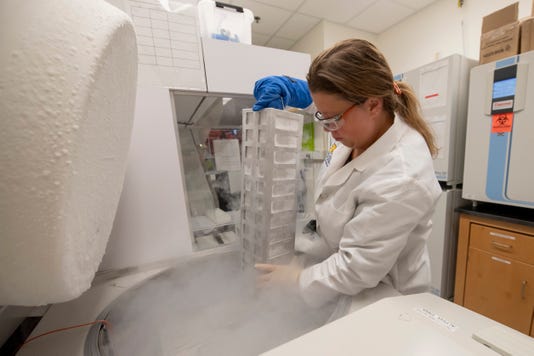 Crystal Pacut, research lab specialist senior, inserts a rack of frozen stem cells into a storage tank cooled with liquid nitrogen at the Program for Neurology Research and Discovery inside the Taubman Biomedical Science Research Building at the University of Michigan.(Photo: David Guralnick, The Detroit News)Buy Photo

Carly Apple's dad came from a family of six brothers, three of whom had a rare genetic disorder that leads to intellectual disabilities and autism. She loves her three uncles, and can't say enough about the many other people who also have the disorder, known as Fragile X Syndrome.

But Apple has known since she was 10 she is a carrier of the Fragile X gene. So when she and her husband, Jonathan Frederick, married in 2013, they began planning their family with in vitro fertilization, a reproductive technology for infertile couples.

In some cases, couples also use IVF so they can test their embryos for genetic diseases before implanting them into the womb.

That's what Apple and Frederick did, using IVF to create 13 embryos, leading eventually to the birth of two children: a son who's 3 and a daughter who's 1.

But several of Apple and Frederick's embryos had the Fragile X gene. The North Carolina couple donated those embryos to the University of Michigan, where they are being used in disease research 10 years after the state's voters approved the use of embryonic stem cells. 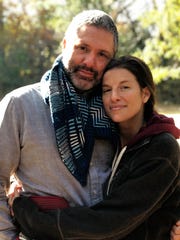 "I just saw what it did to my family and decided that I wanted to do what I could to end the inheritance with my generation," said Apple, 37. "Seeing a stem cell line created with those embryos has given me hope that perhaps a cure for Fragile X is possible someday."

Scores of other couples have donated their embryos to UM since Michigan voters approved embryonic stem cell research in 2008.

UM initially accepted all embryo donations. It made some stem cell lines from embryos that were not tested for genetic abnormalities to serve as a control.

But UM soon ran out of capacity for all of the embryos.

The reason? So many people wanted to donate their frozen embryos — which they no longer needed to build their families — instead of discarding them, said Professor Gary D. Smith, director of the MStem Cell Laboratories.

"Our focus is on modeling diseases," said Smith, who derived all of the stem cell lines created at UM. "That is our specialty."

UM now accepts only embryos that have gone through pre-implantation genetic diagnosis and have been shown to be affected with a disease or an abnormal number of chromosomes. Those embryos allow researchers to study, find treatments and even develop cures for specific diseases. 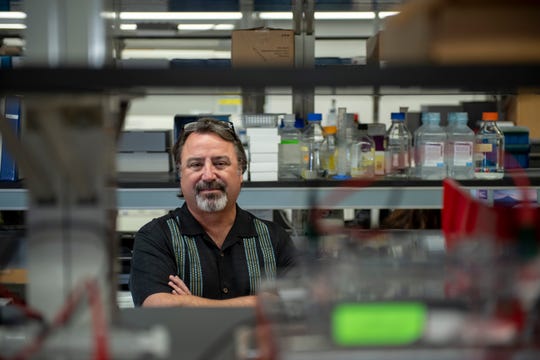 Dr. Gary Smith, director of the Reproductive Sciences Program at the University of Michigan, stands inside his lab, in Ann Arbor, November 5, 2018. (Photo: David Guralnick, The Detroit News)

Donors have helped the university to become a leader in embryonic stem cell lines available for federally funded research.

UM has created 57 stem cell lines during the past 10 years. Of those, 21 were never tested for a genetic abnormally. But 36 are disease-specific stem cell lines that are on the National Institutes of Health's Human Embryonic Stem Cell Registry, making UM one of the top contributors to the registry.

Researchers often use animal models in research. But stem cell lines are models for researchers to study the human cells of diseases to try to better understand them, said Smith.

"Then we are better set to try to either treat it or circumvent it," said Smith.

He pointed to a UM-created stem cell line modeling hypertrophic cardiomyopathy, a potentially fatal condition caused by a genetic mutation in which the heart muscle becomes thickened.

Using a stem cell line created with one of Apple and Frederick's embryos with the Fragile X gene, Peter Todd, a UM associate professor of neurology, showed that the gene that is turned off in Fragile X Syndrome can be turned back on through an emerging technology. 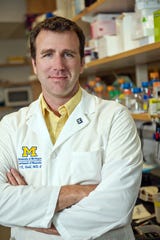 Peter Todd, a UM associate professor of neurology and one of three clinicians and co-director of the Fragile X Syndrome Clinic at the UM Health System.  (Photo: University of Michigan)

Though turning the gene back on in human cells didn't fully restore the function of the gene, the discovery holds promise and led to a paper published in August in the academic journal Frontiers in Molecular Neuroscience.

"It's a first step in developing therapies based on this approach," said Todd, who is also a clinician and co-director of the Fragile X Syndrome Clinic at the UM Health System.

There is no cure for Fragile X, so Todd and other physicians only manage its symptoms, which include anxiety, seizures, behavioral problems, language deficits and learning difficulties.

For researchers, there isn't a great mouse model that has the same type of gene changes that occurs in humans with Fragile X, Todd said, so having this stem cell line made it possible to directly test this technology, which showed promising results for the future.

"We took a big first step," said Todd, "But we have a number of steps to go from where it is to make it a reality in patients. But it is an exciting finding. ... There was some question as to whether this was achievable using the approach we did. This offers hope that it is feasible in cells to use these approaches to reactivate the gene."

Many are excited by the prospect that embryonic stem cell lines could provide hope to people with other incurable diseases.

Dan Gilbert, the billionaire entrepreneur who's a major driver in downtown Detroit's revival, has a son, Nick, who recently had major brain surgery for neurofibromatosis, a genetic disease that causes tumors to form on nerve tissue.

At a private event, Gilbert learned from a reporter that UM had recently created an embryonic stem cell line modeling neurofibromatosis for researchers to study.

"It's great to hear," said Gilbert. "I think that's where the cures are."

But others still oppose using human embryos for research.

Chris Gast, director of communication and education for Right To Life of Michigan, said proponents of embryonic stem cell research made numerous promises before voters approved it a decade ago. He pointed to a 2008 study by Wayne State University that said stem cell lines could help save 770,000 patients with incurable diseases and injuries and reduce health care costs by tens of millions of dollars annually. 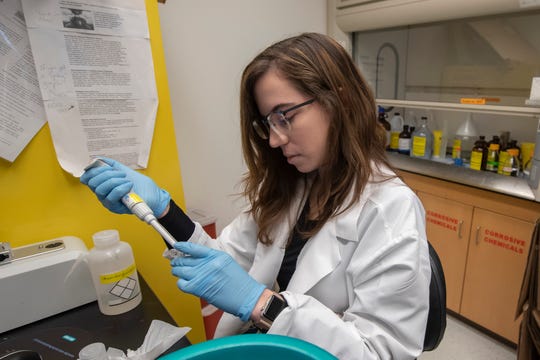 Alina Monteagudo, a post doctoral fellow, harvests DNA from natural killer cells for analysis at the Program for Neurology Research and Discovery inside the Taubman Biomedical Science Research Building at the University of Michigan, in Ann Arbor, November 5, 2018. For a story on the advancement of stem cell research. (Photo: David Guralnick, The Detroit News)

"None of that has materialized," said Gast. "While doing research is really important … you can do the same with an ethical source such as induced pluripotent cells."

IPS cells are obtained from the skin of people with diseases, and they also are a flourishing area of study at UM, Smith said.

Smith, who makes presentations around the world on UM's research, said people question why he's working with embryonic stem cells when he could study IPS cells instead.

"My true belief is that in science we don’t need to bifurcate at different roads," Smith said.

Additionally, the two areas of research are not exactly the same, he said.

"I think we are going to see human IPS cell have huge  potential in certain areas and human embryonic stem cells have benefits in other areas," Smith said. "We should probably take both roads and see which one takes us down the avenue to help people."