A raggedy procession of the forlorn, dispossessed and misbegotten trudged through 34th District Court in Romulus 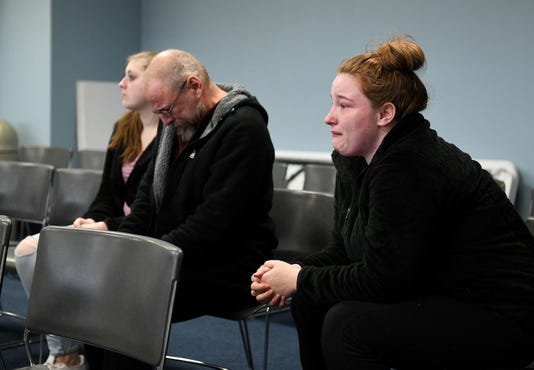 Melissa Stalnaker, 22, of Southgate, right, reacts as she listens to the charges against her mother, Lori Ross, during a video arraignment at 34th District Court in Romulus, Mich. on Dec. 25, 2018. At left is her mother's boyfriend, Bill Lambart. 34th District court handles the arraignments for Wayne County and Detroit that must take place on Christmas.(Photo: Robin Buckson, The Detroit News)Buy Photo

Romulus — There was no unwrapping of presents, no big family get-together, no milk and cookies for Santa.

A raggedy procession of the forlorn, dispossessed and misbegotten trudged through 34th District Court in Romulus. Freshly arrested, they had the misfortune of appearing before a judge on Christmas Day.

For those who had been here before, it was just another day. For others, it was the worst day of their lives on what should have been the most festive day of the year.

“I feel bad, really bad,” said Melissa Stalnaker, 22, who sat in the court waiting for her mom’s case to be called.

Instead of tinsel and garland, a sign at the courthouse door informed visitors that, by entering the building, they gave “implied consent” to be searched. Another sign prohibited 26 items, including corkscrews and spurs.

It was less "A Christmas Carol" and more "Oliver Twist."

Michigan law requires anyone charged with a crime to be arraigned as soon as possible. And so, while most of the secular world rested on Christmas, the criminal justice system lurched ahead.

In Wayne County, that meant 34th District Court was open and ready for business, the Honorable Linda Mack presiding.

“I’m used to it,” Mack the magistrate said as she prepared for the first case. “I’ve been doing this for 10 years."

Even on its best days, the courthouse, a squat brick building next to Detroit Metro Airport, is a dreary place. The worn, brown hallways, normally teeming with people, were eerily quiet Tuesday.

A waist-high Christmas tree sat in the lobby. A second one topped the X-ray machine. Six stockings hung behind the security desk.

In Courtroom 3, 15 defendants lumbered through the sterile environs for two hours. Most were under the age of 35. Their transgressions ranged from assault to theft to possession of a handgun.

Mack ran through the same spiel with each one, describing the charges, entering a plea of not guilty and scheduling a probable cause hearing.

Attorney Marshall Goldberg appears for a video arraignment at 34th District Court in Romulus, Mich. on Dec. 25, 2018. 34th District court handles the arraignments for Wayne County and Detroit that must take place on Christmas. (Photo: Robin Buckson, The Detroit News)

The only matter to be decided was whether they were eligible for bail and how much. It was the difference between going home for Christmas or spending it at the Wayne County Jail.

“Thank you, ma’am, um, your honor,” said a relieved defendant after learning he would be released on a personal bond.

And then there was a man from Detroit, who was charged with assaulting his girlfriend.

“Ten thousand dollars? Ten thousand?” cried the man, who appeared in court through a video feed from the Detroit Detention Center.

After his arraignment was over and he stepped away from the camera, he could still be heard complaining.

If he and others were looking for leniency based on the holiday, they had wandered into the wrong court. Good will toward men was one thing, the law was another.

No cases are decided during an arraignment. Still, that didn’t stop some defendants from professing their innocence.

Mack cut off one defendant as he began to give his version of the crime.

When she asked another man where he lived, he said his baby’s mother lied to the police about him and he got locked up for unjust reasons.

“I asked for your address,” barked Mack.

For some, the only friendly face they saw on Christmas was a lawyer they had never met before.

Abrea Johnson, 17, was arrested for allegedly stealing from a Target in Dearborn. In separate incidents, a cashier charged two women $30 for hundreds of dollars’ worth of items, said Dearborn police.

Johnson, whose alleged role in the incident wasn’t clear, was represented by Marshall Goldberg, the only attorney who appeared in court Tuesday.

Goldberg told Mack he wasn’t apprised of all the facts of the case but believed Johnson had been manipulated by her older co-defendants. He asked for a low bond, which was set at $2,500.

The only people in the spectator section was Stalnaker, her step-daughter and her mother’s boyfriend, Bill Lambart.

Stalnaker’s mother, Lori Ross, had been charged with assaulting Lambart and a police officer allegedly during a drunken fight on Saturday. Lambart didn’t want to press charges. The police were another matter.

Ross, 48, who appeared on the video feed, was crying. Stalnaker, in the back row of the courtroom, was crying.

“My kids are asking where grandma is,” said Stalnaker.

Stalnaker wondered where she would find the money on a day when everything was closed. This wasn’t how she had planned to spend Christmas, she said. She was supposed to be home preparing a turkey dinner.

Lambart, still sore from the fight, also hadn’t bargained for this.