Wrong-way driver in Kentucky crash that killed Michigan family had BAC of .306

Wrong-way driver in Kentucky crash that killed Michigan family had BAC of .306 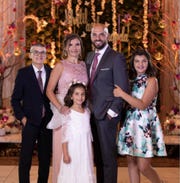 A Kentucky man who drove the wrong way on Interstate 75 earlier this month that caused a crash that killed a Michigan family of five and himself had a blood-alcohol content level nearly four times above the legal limit, according to the county coroner.

Joey Lee Bailey, 41, had a BAC of .306 and was at fault in the crash that occurred Jan. 6, said Fayette County Coroner Gary Ginn.

Bailey, from Georgetown, was driving a white pickup heading the wrong way on northbound I-75 at 2:30 a.m.

The Abbas family was returning home to Northville from a Florida vacation when their SUV was hit head-on by Bailey on I-75 in Lexington, Kentucky, police said.

Before the crash, police received 911 calls about a white pickup heading the wrong way, said authorities.

Witness Kenneth DeGraaf told WLEX-TV in Lexington that the pickup was coming toward him prior to the fiery crash.

The five victims, who were identified by the Fayette County coroner's office, were Issam, 42; Rima, 38; and their children Ali, 14; Isabelle, 13; and Giselle, 7.

Bailey was also killed in the crash, authorities said. The coroner’s statement said that toxicology tests showed he was four times the legal limit when he crashed into the family and died of multiple blunt force trauma at the 107-mile marker.

"That's three times the legal limit, nearly four, so yes, that's very high and he should not have been driving," Ginn told The Detroit News Wednesday.

"Because the at-fault driver is deceased, there will be no criminal charges brought against him, however, our review is ongoing," police said.

The family had traveled to Florida after they postponed their vacation for Rima's grandmother's funeral on Christmas Eve, which caused them to come back Sunday rather than Saturday night, the family said.

Rima was a family medicine doctor at the Beaumont Medical Center in Garden City. Issam was a lawyer and real estate agent. Both grew up in east Dearborn and were well-known and respected for their community involvement.

Thousands gathered Jan. 8 and 9 to pay respects at the funeral at Dearborn's Islamic Center of America, which was founded by Rima Abbas' grandfather. The family was laid to rest beside one another at the Islamic Memorial Gardens on Ann Arbor Trail in Westland. The family shared their memories at a vigil near their home in Northville on Friday.

In lieu of flowers, the family is asking donations be made to Mothers Against Drunk Driving.

In reaction to the tragedy, U.S. Rep. Debbie Dingell, D-Dearborn introduced the Abbas Act Friday, a bill to require that new cars be equipped with ignition interlock devices to prevent intoxicated driving.

“Nothing will bring back the Abbas family. But their lives were too important to forget," Dingell, a Dearborn Democrat, said Friday. "Our community will deeply miss them, but we need to make sure that their death is not in vain. We are dedicated to their memories and others we know to try to prevent another life being lost this way senselessly.”

“This unspeakable tragedy is a horrific reminder that every instance of drunk driving, regardless of the BAC, can wipe out an entire family in an instant," she said in a statement. Witty's own 16-year-old daughter, Helen Marie, was killed by an alcohol and marijuana-impaired driver.

"MADD stands with the Abbas family to provide any support they need at this time, and we are looking forward to working with Representative Dingell on legislation that will honor the family and prevent these tragedies."

Jackson Shedelbower, a spokesman for the American Beverage Institute, argued Wednesday that to install ignition interlock systems so broadly would spread traffic safety resources too thin.

"Good traffic safety policy is all about distributing limited resources to where they can be most effective," Shedelbower said. "Mandating that every vehicle include ignition interlock as standard equipment does not meet that criteria. It would take vast amounts of oversight and enforcement resources to make sure that law’s even being followed."

Shedelbower also said that liability issues for ignition interlock companies could result in unintended consequences. Blood alcohol levels can rise as a person drives, he said, meaning that someone who started under the legal limit may cross into drunk driving territory as they travel.

Hoping to avoid liability in that situation, he said, such companies might set limits much lower.

"At that point, these laws would stop any drinking prior to driving," Shedelbower said. "They would target moderate, responsible social drinkers. Instead of pursuing this ignition interlock law that applies to all vehicle, we just feel these resources could be better used attacking the real problem, which is high BAC and repeat drunk drivers."

Rima's sister, Rana Abbas Taylor, told The Detroit News her family is grateful for Dingell’s remarks as they try to find closure.

“As painful as this horrific tragedy has been, it brings us peace and hope that positive action is being taken to help prevent tragedies like this from ever touching another family,” Taylor said. “We are forever indebted for Congresswoman Dingell’s support and action during a time that has paralyzed us.”

Taylor said the family hopes the bill will carry on their memory and legacy.

“When we broke the news of the Abbas Act to my parents yesterday evening, my father kept repeating ‘If only we can save one life.’ We are comforted by this news and hope that legislators across the country and car manufacturers in our own back yard will support this legislation and allow this bill to be our family’s legacy,” she said.

Mothers Against Drunk Driving asked Michigan Secretary of State Jocelyn Benson on Thursday to push for a new law that would require ignition interlocks for all drunken drivers in Michigan after the first offense.