Whitmer set to speak at MSU women's march amid controversy

Student organizers are proceeding with the Michigan State University event despite concerns over allegations of anti-Semitism by national leaders.

Whitmer set to speak at MSU women's march amid controversy 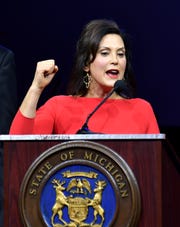 Lansing — Gov. Gretchen Whitmer will speak Sunday during a Women’s March rally at Michigan State University, where student organizers decided to proceed with the event despite concerns over allegations of anti-Semitism by leaders in the national movement.

Sexual assault awareness will be a key theme of the MSU event in the wake of the Larry Nassar scandal “and the treatment of sexual assault survivors by now former-President John Engler,” said Debbie Miszak, a 19-year-old sophomore and lead organizer for the march.

Engler resigned as the university interim president late Wednesday after a series of controversies, including the former governor's comment to The Detroit News editorial board that Nassar victims were “enjoying” the spotlight.

Whitmer will headline a roster of speakers that includes state Reps. Leslie Love and Sherry Gay-Dagnogo of Detroit, as well as a Nassar victim and a representative from MSU’s Jewish Student Union.

Student organizers are inviting residents from across the Lansing region after a statewide rally held at the Michigan Capitol the past two years was moved to Detroit. That event is scheduled for Saturday at the Charles H. Wright Museum of African American History.

“That’s something that was really hard for us to grapple with,” Miszak said, “because the women’s movement in general is supposed to be very intersectional, and how can you have an intersectional movement when you hold these really disgusting biases?”

In invitations to the event, the MSU Women’s Council made clear that it “condemns all forms of bigotry, including antisemitism and anti-LGBTQ+ rhetoric.”

Activists in some states and cities have cancelled women’s marches or formed alternatives following reports of controversial comments by two national leaders, including claims that Jews bear a “special collective responsibility” for exploiting people of color.

The Michigan Republican Party this week called on Whitmer and other Democrats to denounce the national group over the claims.

“Anti-Semitism has no place in American society or within the women’s movement, and those who support it should be thoroughly denounced,” Michigan GOP co-chair Amanda Van Essen Wirth said in a statement. “Only by working together can we ensure better outcomes for all women, not just those on the political left.”

The governor's office confirmed Whitmer will speak at the MSU/Lansing Women’s March but did not immediately respond to questions about controversy over the national version. She spoke at the inaugural Michigan Women’s March in 2017 and last year attended the Capitol rally as a gubernatorial candidate.

Student organizers have never had contact with national organizers and did not get any funding from the national group, Miszak said.

“All of our money was raised by us, so we don’t really have any obligation to cover for the national Women’s March,” she explained. “That’s why I don’t feel bad saying these are really awful, terrible things and I don’t want to be a part of that.”

Gay-Dagnogo, who plans to speak at the Detroit and MSU marches, said she was not well-versed in the national drama but thinks it is clear organizers are “lifting up the idea of diversity and inclusion, and I salute them for that.”

The MSU event “is very timely, especially with the recent resignation of Gov. Engler,” she said. “I think any time we can convene as women collectively to fight on behalf of women on issues that directly impact women, we should stand united.”

The Michigan Women's March in Detroit is set to begin with workshops at 9 a.m. on Saturday and continue through the afternoon, with a rally outside the Charles H. Wright Museum of African American History at 11 a.m.

The East Lansing march is expected to begin Sunday at 1 p.m. with a march from the MSU Union to the Hannah Administration Building, where speakers will begin at 1:30 p.m.