Joshua Rosebush was in custody at a hospital Tuesday afternoon, Michigan State Police said. He was in a vehicle about 1 p.m. when he shot at officers who were pursuing him.

Authorities said the officers, who were not hit, returned fire, striking Rosebush. His condition was not immediately available.

About 11 hours earlier, Saginaw Township Officer Jeff Koenig, 48, was shot in the face and shoulder after stopping a stolen pickup in Kochville Township, about 85 miles northwest of Detroit.

The pickup pulled into a parking lot, but as the officer approached, the suspect pulled out a gun and started shooting. 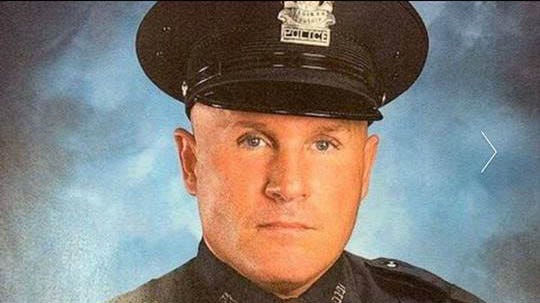 After he was shot, the officer fell to the ground but was able to radio for help. The suspect drove off.

Koenig was listed in critical but stable condition Tuesday.

Pussehl said the officer followed protocol before the stop and radioed in the license plate number of the vehicle.

"Most of our officers wear body cameras, and we’re still trying to locate that body camera. It might still be at the scene," Pussehl said. "It could have come off when the officer fell."

Responding officers arrived within a minute or so of the shooting and transported the officer to the hospital.

A 16-year-veteran of the Saginaw Township police was shot in the face and the shoulder after he pulled a driver over in Kochville Township on Jan. 22, 2019. (Photo: Michigan State Police)

The department's critical incident stress debriefing team was brought in, as was the department chaplain, who spoke to the officers and sergeant who were on duty at the time.

The stolen pickup was located Tuesday morning, hours before the suspect was arrested.

Rosebush's arrest ended a manhunt spanning at least three counties: Saginaw, where the initial shooting took place; Genesee, where he was spotted less than a half-mile from a Michigan State Police post; and Shiawassee, where he was captured. Schools in three mid-Michigan districts initiated lockdown procedures as police searched for much of the day Tuesday.

Stolen vehicle 2013 FORD SUPER DUTY has been recovered. Michigan registration plate DB-60703, AIS Construction. JOSHUA MICHAEL ROSEBUSH has NOT been located. We are still looking for him, he is ARMED & DANGEROUS, call 855-MICHTIP! pic.twitter.com/P67hf8XJ1f

Rosebush has a lengthy criminal record.

He was free by May 2013, when he stole from a vehicle. That October, Rosebush pleaded guilty to two counts of stealing/retaining a financial transaction device without consent, along with one count of larceny from a motor vehicle, and was sentenced to just under two years.

Chris Gautz, a spokesman for the Michigan Department of Corrections, said Rosebush was paroled in April but absconded from parole this month.