Michigan's 14 congressional races attracted a combined $80 million in campaign donations and outside spending in 2018, double the amount in 2016.

Michigan Democrats flipped two seats in the U.S. House in last fall's election, but the effort was not easy or cheap.

The state’s 14 congressional races attracted a combined $80 million in campaign donations and outside spending, according to a new analysis from Craig Mauger, a watchdog with the Michigan Campaign Finance Network.

That’s roughly twice as expensive as races in the exact same districts in 2016, with a majority of the cash flowing to two record-setting contests won by freshman Democratic Reps. Elissa Slotkin of Holly and Haley Stevens of Rochester Hills.

Slotkin and her allies outspent incumbent Republican Mike Bishop in the 8th District race that attracted a combined $28.3 million, making it the most expensive U.S. House contest in Michigan history, Mauger said. The previous record was $14 million.

Stevens and her allies also outspent Republican Lena Epstein in the 11th District race that attracted $19 million —  also among the most expensive in Michigan history.

Should we expect even more spending — and political ads — on congressional races in future election cycles, or was 2018 a unique year with dynamics unlikely to be replicated any time soon?

U.S. House and Senate races across the country are getting more expensive “pretty much cycle after cycle,” Mauger told The Detroit News.

But Michigan had not had many competitive congressional races under district maps approved by the Republican-led Legislature in 2011.

“2018 was an odd year because we had a bunch of close races,” Mauger said. “Money follows competition, so if we have close races, they’re going to tend to be more expensive.”

The state’s spokesman for the marijuana regulatory arm of the Department of Licensing and Regulatory Affairs voted to stop recreational marijuana businesses from opening in his community.

David Harns, a department spokesman instrumental in communicating the department’s marijuana regulations, also is an elected trustee in Ingham Township.

The connection was first reported by the Lansing City Pulse.

Harns said the township board’s vote in November to opt out of the recreational marijuana industry reflected the township’s decision in September 2017 not to allow medical marijuana businesses to operate there.

“It’s a matter of representing the wishes of the township,” said Harns, who is a spokesman for the Bureau of Marijuana Regulation and the Liquor Control Commission.

Harns has been a township trustee since 2012. Though he disclosed his elected role when hired by the state in 2017, Harns said he does not see a conflict of interest between the two responsibilities.

“When I work for the state, what I’m doing is communicating what the department’s actions are. I’m not making those decisions,” Harns said. “At the local level, I am the voice of my constituents.” 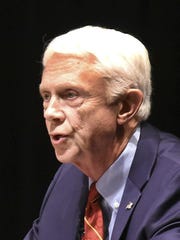 Rep. Elissa Slotkin, D-Holly, was selected for the Committee on Homeland Security, and Rep. Haley Stevens, D-Rochester Hills, was appointed to Science, Space and Technology.

Sen. Gary Peters, D-Bloomfield Township, will serve as the top Democrat on the Senate Senate Armed Services Subcommittee on Emerging Threats and Capabilities.