Macomb Twp. man charged with trying to pick up girl, 13

Macomb Twp. man charged with trying to pick up girl, 13 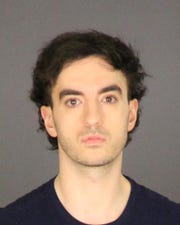 Marine City — A Macomb Township man has been charged with trying to pick up a 13-year-old St. Clair County girl on social media, officials said Tuesday.

He was arraigned Sunday on the charges in 72nd District Court and a magistrate ordered him held on a $30,000 bond, which Krakosky posted. He is scheduled to appear next in court on Feb. 6.

Donnellon said detectives from his office began investigating Krakosky after the victim's father called police and reported he was concerned about the girl sneaking out of their St. Clair Township house to meet with Krakosky. St. Clair Township is about 35 miles northeast of Detroit and about 14 miles southwest of Port Huron.

The parent gave the detectives permission to assume the girl's identity and communicate with Krakosky. He asked to meet the girl in the early morning hours of Jan. 25 near her home, police said.

Investigators set up surveillance where they were supposed to meet and arrested Krakosky when he showed up.