GOP attorneys argue Secretary of State Benson is trying to strike a deal that is "Supreme Court proof" even as the high court takes up similar cases.

Lansing — Attorneys for Michigan House Speaker Lee Chatfield and other Republicans are asking a federal court to reject a proposed settlement that would force the state to redraw several legislative districts for the 2020 election.

Democratic Secretary of State Jocelyn Benson is  attempting to strike a deal with plaintiffs that is “Supreme Court proof” but should not be allowed to do so because the high court is preparing to take up similar cases, the GOP attorneys contend.

Benson announced the settlement agreement last week and requested approval from a three-judge panel overseeing the federal lawsuit, which alleges partisan gerrymandering by the GOP-led Legislature when it drew congressional and legislative lines in 2011.

The deal would require reconfiguration of 11 state House districts that Benson called the most “egregious” examples of partisan gerrymandering, as determined by both mathematical computations and appearance. It would likely force changes to many neighboring districts as well.

With the high-stakes case set to go to trial Tuesday in Detroit, all sides are hoping the court will rule on the settlement in coming days or respond to multiple requests to delay the proceedings.

GOP attorneys, who have also asked the U.S. Supreme Court to intervene and delay the Michigan lawsuit, argue the trial should be called off pending a high court decision in alleged gerrymandering cases out of Maryland and North Carolina. Oral arguments in the nation's high court are set for March 26. 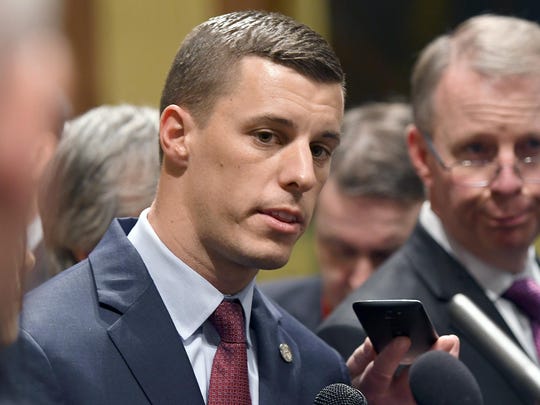 New Speaker of the House Lee Chatfield R-Levering, speaks to the media in Lansing in this Wednesday, Jan. 9, 2019 file photo. (Photo: Rod Sanford / Special to The Detroit News, file)

By settling the Michigan suit before those cases are resolved, Benson and Democratic plaintiffs are “attempting to make the proposed consent decree immune from the Supreme Court’s rulings,” attorneys Jason Torchinsky and Charlie Spies said Thursday in a court filing.

They also defended the 11 districts targeted for reconfiguration under the proposed settlement, arguing they are consistent with state standards and are not unconstitutional, as Benson contends.

In an interesting pretrial twist, the federal court on Tuesday rejected an attorney-client privilege shield for documents related to weekly meetings that Michigan GOP officials and map makers held in a law firm in 2011. The documents, if made public, could shed new light on a redistricting process that was primarily completed eight years ago behind closed doors.

Republican lawmakers have denied overt political bias in the district boundaries they approved in 2011, but emails between map makers revealed in the federal case have included partisan references and commentary on the prospects of maintaining GOP power.

Noting their odd shapes, Benson last week said that "optics" played some role in selecting the settlement districts, but the decision was primarily based on “whether the evidence suggests they are partisan outliers drawn with the intent to predetermine the partisan outcome of the district’s election.”

Nine of the settlement districts were identified in court records as among the most “partisan outliers,” according to an analysis by University of Michigan professor Jowei Chen, who used a computer program to run thousands of simulations to compare the maps to possible alternatives.

The target districts include two Republican-held seats in Metro Detroit, both in Macomb County, currently represented by Rep. Steve Marino of Harrison Township and Pamela Hornberger of Chesterfield Township.

“There is significant evidence that those districts were drawn in an effort to circumvent the constitutional rights and protections of our voters,” Benson said last week.

Benson said the consent decree is limited in scope — it does not include congressional or state Senate districts also challenged in the lawsuit — to limit “upheaval” in the 2020 elections. The districts would be redrawn again for 2022 by a new independent redistricting commission approved by voters last fall.

But GOP attorneys said Thursday the proposed settlement could “unnecessarily cause confusion and chaos” across Michigan, especially if the U.S. Supreme Court rejects gerrymandering arguments or jurisdictional claims in the Maryland and North Carolina cases.

The deal would “likely cause a substantial domino effect on other districts not presently contemplated and create unpredictable and unforeseen consequences with regard to elections, incumbents and the state Legislature,” they argued.

Republican attorneys contend Benson should no longer be treated as a defendant in the case because she has “openly refused to defend the law being challenged.”