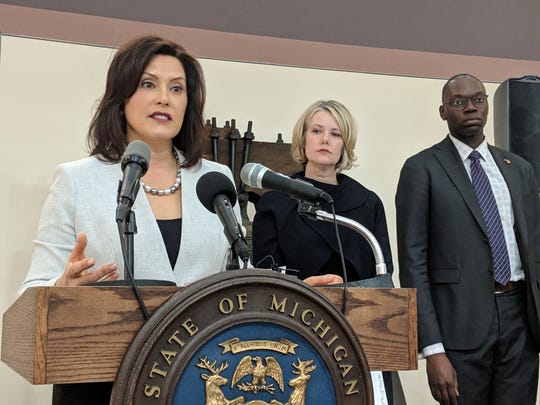 In her first partisan feud with lawmakers, Whitmer countered by asking Democratic Attorney General Dana Nessel for a formal opinion on the legality of the panels. They “create unnecessary bureaucratic hurdles that get in the way of our state government responding to problems with drinking water quickly," she argued.

The concurrent resolution approved by the House in a 58-51 vote and now headed to the GOP-led Senate would nullify Whitmer's executive order to create a new Michigan Department of Environment, Great Lakes and Energy. The order would also eliminate new commissions Republicans created to give businesses a greater say in environmental rule-making and permit reviews.

GOP Rep. Jim Lower of Cedar Lake introduced the resolution and noted that “entities created by legislation ought not be abolished by executive decree.”

Lower called Whitmer's elimination of the panels an "abuse of power" and an "after-the-fact veto" of the legislation, though Democrats argued in committee that Republican former Gov. John Engler also eliminated some committees via an executive order reorganizing the environmental department in 1991.

"Nobody up here is debating whether or not the governor has a right to reorganize her departments," said Rep. Jason Sheppard, R-Temperance, chairman of the Government Operations Committee. Rather, lawmakers' argument centers around the governor's actions to eliminate panels created by the Legislature, he said, and "whether or not the Legislature as a branch of the government has the right to question that.”

If the Senate supports the measure, the rejection would be the first since 1977, when both chambers overturned an executive order by former Gov. William Milliken.

The Senate Oversight Committee is slated to meet Thursday and could consider the resolution then. But Republicans in the upper chamber did not immediately act Wednesday after discussing the executive order for more than an hour behind closed doors.

“The goal is to keep an open line of communication and hope that there is a way for us to reach consensus and compromise at every opportunity,” said Amber McCann, a spokeswoman for Majority Leader Mike Shirkey, R-Clarklake.

"Senate Republicans are concerned the environmental rules and permit panels have not been given an opportunity to be fully implemented and used in the way they were intended to provide greater transparency and accountability for citizens,” McCann said.

The clash over the environmental order emerged as the first sign of public friction between Whitmer and the GOP-led Legislature following weeks of calls for bipartisanship amid divided government.

Whitmer blasted House Republicans after the vote, arguing they "voted down protections for drinking water."

The governor made clear she has no plans to withdraw or amend her executive order, saying she has “a lot of tools” at her disposal. If her order is rejected, she said she’ll write another or “do something else.”

“If their real concern is ensuring that business has an opportunity to be heard, I can work with that,” Whitmer told reporters. But ”for anyone to stand in the way of a reorganization to protect our water and clean it up based on a couple commission that don’t even meet that may not even be legal I think is horribly irresponsible.”

“Overturning something the Legislature did maybe isn’t starting things out on the right foot,” said GOP Rep. Triston Cole of Mancelona.

“We have laws, and then we have rules. And laws always supersede rules,” said State Sen. Tom Barrett, R-Potterville. “When you have an executive order that in my opinion flies in the face of legislative authority and statute, then yeah, it’s incumbent on us to push back on that.”

As the "people's chamber," the House has the responsibility to review Whitmer's orders when they carry the weight of law, Chatfield said Wednesday on the House floor.

Whitmer signed several environmental edicts Monday, including the order to overhaul the department in ways she said would allow it to more closely focus on protecting the Great Lakes, ensuring clean drinking water and combating climate change.

The committees and commissions created by the Republican-led Legislature last year were designed to rein in the environmental department’s discretion to approve rules or permits that affect businesses. Supporters described it as an effort to include more stakeholders in those decisions.

House Democrats raised concerns about the conflict of interest inherent in appointing industry leaders to panels meant to regulate their activities. They also noted that while Republicans' main issue with Whitmer's executive order may be those commissions, a rejection of the order in its entirety would threaten other provisions that protect public health and drinking water.

The Environmental Rules Review Committee must include one public health professional and two members of the general public, along with representatives from the oil and gas industry, solid waste industry, a manufacturing organization, a small business organization, public utilities, an agricultural organization, local governments, a land conservancy group and an environmental organization.

The committee would oversee all environmental department rule-making and could vote to stop regulations, but the law also gives the governor the power to direct the rules process to continue, regardless of the committee determination.

Lawmakers also created a new 15-member Environmental Permit Review Commission. In contested permit cases, the department director could pick three commissioners to sit on a panel that would review — and potentially could reverse — a determination by an administrative law judge.

Whitmer said environmental attorneys in Nessel's office have already signaled committees are operating on "thin legal ice." She wants a legal opinion on whether they conflict with requirements of the Clean Air and Clean Water acts.

The U.S. Environmental Protection Agency raised concerns about the legislation last year and indicated the commissions may require federal review and approval, according to documents released by the governor.

Among the questions Whitmer wants Nessel to answer is whether the commissions violate federal rules by “impermissibly slowing down the process by which environmental rules are promulgated and permits are issued.”

Michigan residents are facing increasing threats to their drinking water, “from lead-tainted water to PFAS contamination to foul-smelling emissions,” Whitmer wrote. “At the same time, businesses that follow the rules deserve certainty and promptness in the permit review process.”

Bird said he looks forward to “substantive conversations” about the executive order in coming weeks.

“Now is the time to put partisan politics aside and do what’s right for the people of our state,” he told lawmakers. “It is in the best interest of Michigan families and businesses to ensure that in the Great Lakes state, everyone can trust the water coming out of their tap.”

Chatfield said he believed the laws passed last year were legal and constitutional, "but I will leave the attorney general to do her job as she sees fit and was elected by the people to do so.”

Sen. Ken Horn, R-Frankenmuth, said the Whitmer administration did not brief lawmakers on her executive order before announcing it publicly Monday.

“If the governor is serious about building bridges, she needs to give us a call once in a while,” Horn said, noting the Senate is traditionally a “deliberative body” and is unlikely to rush any legislative response.