The investigation started with a tip from the National Center for Missing and Exploited Children, and resulted in the suspect's arrest in California 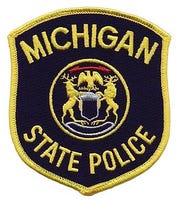 Ott had to be extradited from California to face charges.

Police say the investigation started with a tip from the National Center for Missing and Exploited Children. Police conducted a search of his home and found "multiple internet-capable devices and evidence," and were issued an arrest warrant.

The arrest itself took place in California. After being extradited back to Michigan, Ott was arraigned on Saturday and given a cash or surety bond of $100,000.