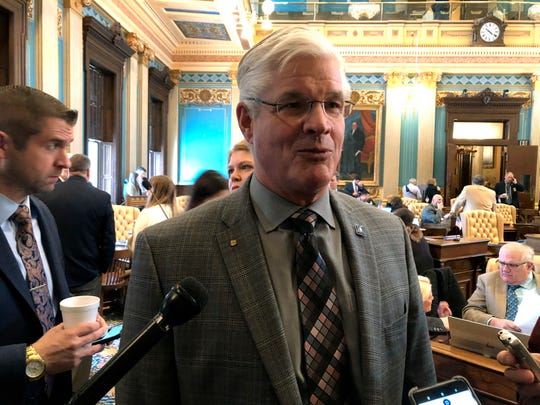 The 2015 road funding plan ensures that, by 2021, $1.2 billion more is devoted to roads each year through increased registration fees, gas taxes and a $600 million general fund diversion.

But Michigan Department of Transportation Director Paul Ajegba last week told senators that an additional $1.5 billion per year is needed to fix just the state trunklines. That figure did not include what would be needed for state and city roads.

“There’s no way we’re going to fix this problem that’s been 50 years in the making without coming up with new revenue for infrastructure,” Senate Majority Leader Mike Shirkey, R-Clarklake, said at a Wednesday press conference.

The comments came after Gov. Gretchen Whitmer used Tuesday's State of the State address to criticize “incremental fund shifts” for roads. As a candidate, Whitmer said she wanted to increase state infrastructure funding by up to $2 billion a year and indicated she may ask lawmakers to increase “user fees,” such as gas taxes, or ask voters to approve borrowing in the form of state bonds.

House Speaker Lee Chatfield, R-Levering, on Wednesday noted the 2015 road funding plan has yet to be fully implemented.

Chatfield also was more reticent to acknowledge the need for new revenue, noting that state leaders should first look for funding in other areas such as parts of the gas sales tax that currently go toward state school aid.

He has recommended diverting that part of the gas sales tax toward roads — so all revenue that is supposed to be dedicated for road and bridge repairs does so. His plan would hold schools harmless by pulling the same amount of money for school aid from another pot of state money, but education groups oppose the idea.

“It’s much easier to poison a well than to dig one, meaning it’s easy to criticize a plan when you don’t have one yourself,” Chatfield said.

While the acknowledgement from a Republican leader like Shirkey is new, it's still too early to know what exactly the governor’s plan for roads is or how the Legislature will react to that plan, said David Dulio, chairman of the political science department at Oakland University.

Republican former Gov. Rick Snyder initially pushed for a larger road funding increase than legislators approved in 2015, and state studies project road quality will continue to deteriorate even after the plan is fully phased in by 2021.

As of 2017, 40 percent of all paved roads that are eligible for federal assistance were rated in poor condition, according to the Michigan Transportation Asset Management Council. Officials say it is significantly more expensive to replace a bad road than it is to maintain a decent one.

"House Democrats knew the (2015) proposal was bad when it was introduced," and the roads are in worse shape than they were in 2015, House Minority Leader Christine Greig, D-Farmington Hills, said Wednesday.

When it comes to road funding, Shirkey said, state leaders must first identify a clear goal, establish what can be accomplished with existing revenue and then look at other revenue options. He said the 2015 plan was a good start to address a big problem.

“Nobody should assume we’re going to solve this problem in one fell swoop,” Shirkey said. “It’s too big.”

While it’s important to act quickly on the state’s crumbling roads, “acting and governing in an era of shared government requires negotiations and compromise,” Chatfield said.

Senate Minority Leader Jim Ananich agreed that a funding fix for the roads may not happen overnight, noting that Whitmer's address laid out a vision that will take action through the budget.

Michigan is “stuck in neutral” until Whitmer’s plan is ready, but there’s little doubt that the pressure for action will continue until then, said John Sellek with Lansing-based public relations firm Harbor Strategic and a former staffer for ex-Attorney General Bill Schuette.

“The public clamor for road repair is louder than ever, and it’s clear the Legislature and governor both hear it,” Sellek said.

More on State of State

Chatfield and Shirkey said, overall, the governor’s message Tuesday stayed true to her campaign message and likely pleased “the base of one party.” But the governor missed some opportunities to better address the state’s highest-in-the-nation car insurance and outdated criminal justice systems, Chatfield said.

“It’s important to note that the campaign trail has ended and now it’s time to govern,” the speaker said. "It’s important that when you govern you need specificity and you need details.”

Whitmer's office said Wednesday that more details on her priorities will be released with the executive budget on March 5. 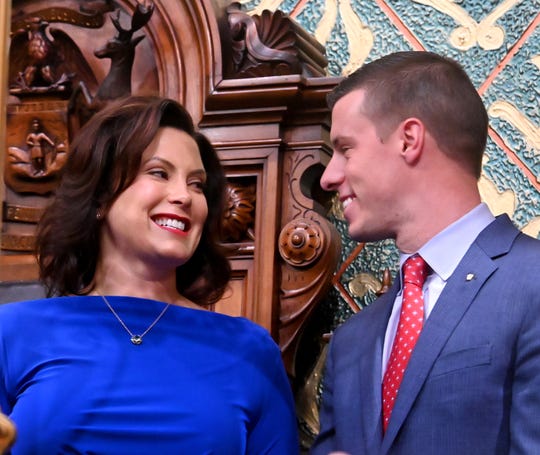 Gov. Gretchen Whitmer with Speaker of the House Lee Chatfield before her State of the State speech. (Photo: Dale G. Young, The Detroit News)

Addressing Whitmer’s vow not to sign a budget similar to past “budget gimmicks and Band-Aids,” Shirkey said he assumed her comments referred not to the most recent lame duck session, but to prior administrations.

“I just assumed she was talking about the Granholm era,” he said.

The Clarklake Republican said he intended on ushering the Medicaid work requirements he championed through the waiver process, despite opposition from Whitmer, and was dubious about the governor’s plans to combat climate change.

“I just find it fascinating that we can sit here in Michigan in the chamber of the House and think that we can control the climate,” he said.

Other environmental issues, such as per- and polyfluoroalkyl substances contamination, require a dose of wisdom to complement the current information and knowledge on the subject, Shirkey said.

“It is not clear to me that we’ve created a situation where we know what to do with" the recommended lifetime level for PFAS, Shirkey said.

Shirkey also criticized Whitmer’s idea of free community college and scholarships for four-year degrees, arguing that the quality of education may be a greater obstacle than cost.

“What if all those achievements were in underwater basket weaving?” Shirkey said. “Free can lead to the cheapening of things to the point where they become unaffordable.”