Michigan Senate approves plan that would require a conviction before police could forfeit confiscated property worth less than $50,000. 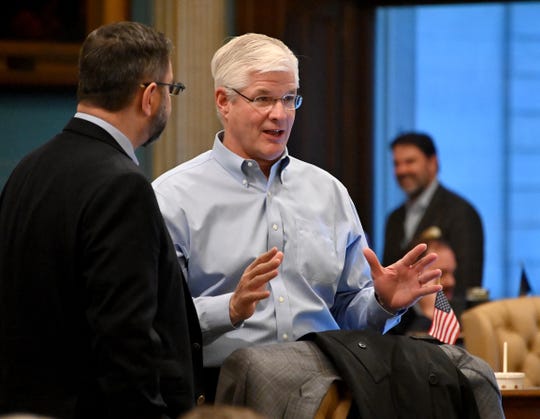 Lansing — The Michigan Senate on Wednesday approved a civil asset forfeiture reform plan that would require a conviction before police could permanently seize or sell confiscated property worth less than $50,000.

The proposal sailed through the Senate in a 36-2 vote with bipartisan support and now heads to the House, which approved similar legislation last year and where leaders have indicated civil asset forfeiture reform will be a priority this term.

“I don’t think anybody should lose their property until they’re actually convicted of something, and I think that’s the essence of this particular bill,” said Senate Majority Leader Mike Shirkey, R-Clarklake.

“It’s something we’re pretty confident the governor is in support of, too, so let’s get a win across the goal line for everybody,” he said. “The House is interested in processing it, so let’s do it.”

The conviction requirement would be the latest step in a years-long process to reform civil asset forfeiture laws, which allow police departments to permanently confiscate cash, cars or other property from suspected criminals.

The Legislature in recent years has increased the standard of evidence required to process forfeitures and eliminated a bonding requirement for citizens fighting to keep their property.

Sponsoring Sen. Pete Lucido, R-Shelby Township, said setting a $50,000 threshold for forfeitures that requires a conviction was an attempt to compromise with law enforcement agencies, which have raised concerns about similar efforts in the past.

“They believe that anybody that’s having $50,000 cumulative would be called a mule,” he said, referencing people who transport drugs. “I don’t necessarily agree all the way, but you know, a start is a start, and the direction is right.”

More than $13 million in cash and assets amassed by drug traffickers was forfeited in 2017, former Michigan State Police Director Kriste Kibbey Etue said in an annual report presented last summer to the Legislature.

“Asset forfeiture funds were used to enhance law enforcement by providing resources for equipment, personnel, vehicles, training, and supplies,” she wrote. “Assets seized pursuant to this program also allowed some agencies to contribute monies to non-profit organizations that assist in obtaining information from citizens for solving crimes.”

The Senate plan will not prohibit police offers from doing their jobs, bringing charges and forfeiting property in cases of conviction, Lucido said.

“If you’re utilizing this as a sword to go ahead and slash an individual, shame on you,” he said. “You should look at being part of a process that says we are here to protect and serve, not take.”

Lawmakers are optimistic Gov. Gretchen Whitmer will sign the legislation if it reaches her desk.

“She better be all the way in this, because this has really affected Southeast Michigan,” Lucido said. “That’s where her votes came from. She should look at the unfairness and the way the law has been in place for so long.”