Dozens in Ferndale protest Trump's declaration of a border emergency

Hundreds more rallies were planned for Ypsilanti, Ann Arbor, Howell, and cities all across the country, per organizer MoveOn.org

Dozens in Ferndale protest Trump's declaration of a border emergency 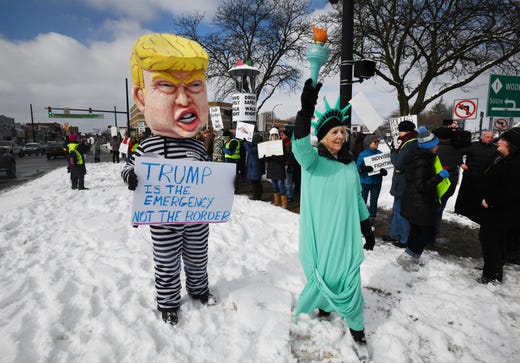 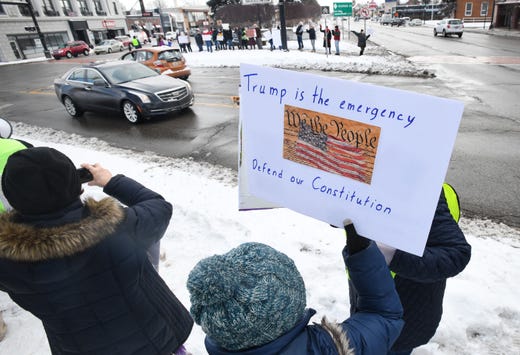 Protesters wave at traffic in the median of Woodward at Nine Mile in Ferndale. Daniel Mears, Detroit News
Fullscreen 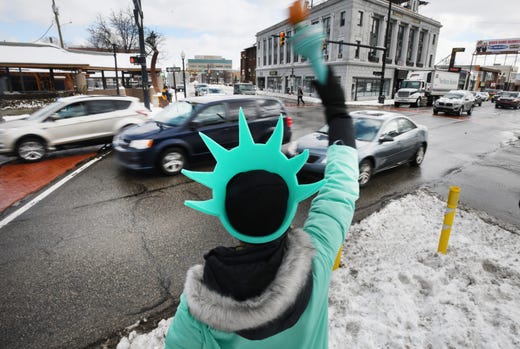 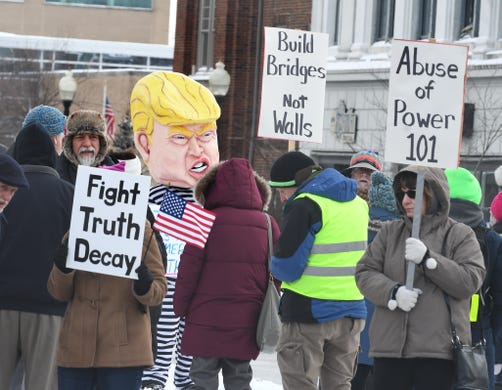 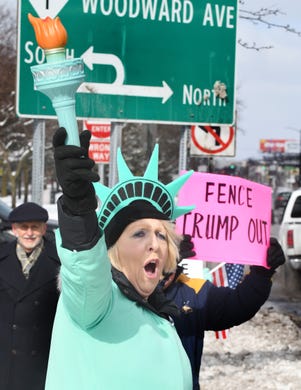 Faith Allen wears a Statue of Liberty costume during a MoveOn.org rally against President Donald Trump's declaration of a national emergency in the median of Woodward at Nine Mile in Ferndale on Feb. 18. Daniel Mears, Detroit News
Fullscreen 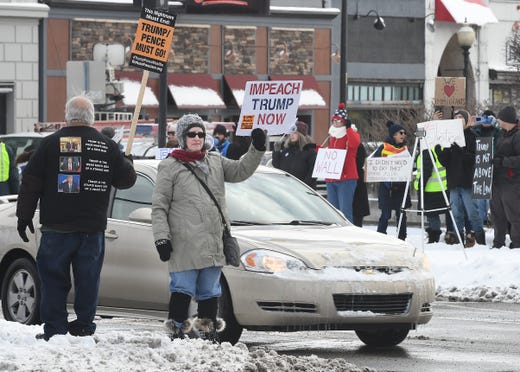 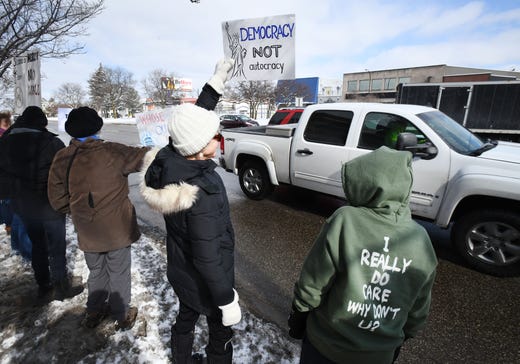 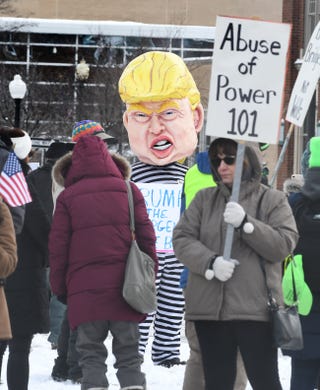 Ferndale — On President's Day 2019, dozens of people bundled up for a noontime rally at Nine Mile and Woodward to protest President Donald Trump's declaration of an emergency on the southern border between the United States and Mexico.

Trump issued his declaration Friday, after a budget compromise to prevent another partial shutdown of the federal government yielded less than $1.5 billion of the $5 billion he'd sought from Congress to build the border wall that was a chief campaign promise.

Protesters Monday called that a "fake emergency," declared by a president who was abusing his power.

Organizer Paula Martinos-Mantay, 59, of Royal Oak said the protest was put on by Indivisible Fighting 9, a branch of the Indivisible movement operating out of Michigan's 9th and 11th Congressional districts. MoveOn led the effort nationally, with Indivisible and other organizations. 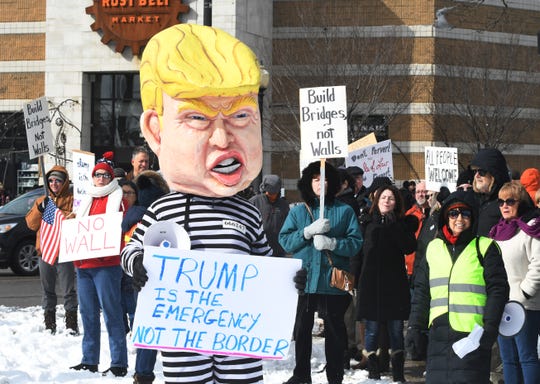 "We're here today because we believe the president is acting in an extremely undemocratic fashion, and we're tired of it," Martinos-Mantay said. "Does this country need immigration reform? Absolutely. But it is not an emergency."

The protest fell well-short of the 300 people who RSVP'd, but grew over time.

"We're hoping we get enough traction that it shows the person who sits home on their couch every day that they should stand up with us," Martinos-Mantay said.

"We feel like our liberties are being stomped on by Trump," Allen said. "I just don't like the idea of him taking (money) from other places to pay for the wall."

Other rallies were scheduled in Michigan in Ypsilanti, at U.S. Rep. Debbie Dingell's office at the federal building in Ann Arbor, and at the Old Howell Courthouse in Howell, according to MoveOn.org.

While the emergency declaration was the triggering event for Monday's rallies, Allen and other protesters took issue with the idea of southern border wall, whether it was paid for as an emergency or through the normal appropriations process. 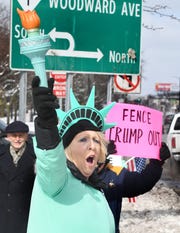 Faith Allen wears a Statue of Liberty costume during a MoveOn.org rally against President Donald Trump's declaration of a national emergency in the median of Woodward at Nine Mile in Ferndale on Feb. 18. (Photo: Daniel Mears, Detroit News)

Courtney Yarbrough, 29, of Royal Oak brought a homemade, cardboard sign that said "fake emergency," and referred to Trump's November 2016 election and the declared emergency as "illegitimate."

Normally she'd be at work at a company that sells wood veneers, but Yarbrough said it was important to show up and speak out because "it can't be seen as normal, what he's doing."

"The wall shouldn't be a thing," she continued. "It's not necessary, it's never been necessary, and it's not an emergency, and we need to talk about it."

Bruce Fealk, 65, of Rochester Hills, wore an oversized Trump head and a prison-style jumpsuit to the protest.

"Our fake president, that gives us all this fake news, is giving us a fake emergency to show that he can," Fealk said as the protest began. "There is no emergency at the border. It's completely made up... He knows none of it is true. He just wants to build the wall so he can keep his base and try to use it to get re-elected in 2020."

The oversized Trump head, Fealk said, has been "all across the country," and even has a website: GiantTrumpHead.com. Fealk said he also has a giant head in the image of ex-Gov. Rick Snyder.

In an interview Sunday, senior White House adviser Stephen Miller said Congress granted the president wide berth under the National Emergencies Act to take action. But Trump’s declaration goes beyond previous emergencies in shifting money after Congress blocked his funding request for the wall, which will likely factor in legal challenges.

"The current situation at the southern border presents a border security and humanitarian crisis that threatens core national security interests and constitutes a national emergency," reads the president's Feb. 15 emergency declaration. "The southern border is a major entry point for criminals, gang members, and illicit narcotics.

The declaration never makes explicit mention of a border wall, but invokes the military's "construction authority," and orders whatever manpower necessary, via the Ready Reserve, to be shifted to the southern border "to assist and support the activities of the Secretary of Homeland Security."