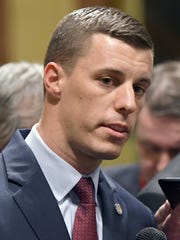 New Speaker of the House Lee Chatfield R-Levering, speaks to the media in Lansing in this Wednesday, Jan. 9, 2019 file photo. (Photo: Rod Sanford / Special to The Detroit News, file)

Lansing — Michigan House Speaker Lee Chatfield's younger brothers left positions in the lower chamber at the end of 2018 because of a rule that prohibits a supervisory relationship between family members.

Lee Chatfield, who became House speaker about 50 days ago, now oversees all business operations and employees for the state House, a position that would have placed the Levering Republican in a supervisory role over his brothers, Aaron and Paul Chatfield. He wasn't considered to have that administrative oversight responsibility as the House's No. 2 leader during the 2017-2018 session.

The brothers’ departure was the “right thing for Michigan’s taxpayers,” Lee Chatfield’s spokesman Gideon D’Assandro said in a statement.

“They decided together to go above and beyond to honor the intent of the policy and guarantee Michigan taxpayers peace of mind about their state government,” D’Assandro said.

The Detroit News was unable to contact Paul or Aaron Chatfield.

The House has no policy that would prevent family members from working in the same chamber. But the House does prohibit family from being hired "if the appointment would create a supervisor-subordinate condition," House Business Director Doug Simon said.

Aaron and Paul Chatfield started working in the House in January 2017 and left Dec. 31, 2018 while Rep. Lee Chatfield served as speaker pro tempore to former Speaker Tom Leonard, according to the House Business Office. They are now in their mid-20s.

During his two years in Lansing, Aaron Chatfield worked as a legislative aide for Republican Rep. Aaron Miller of Sturgis, who chaired the House Elections and Ethics Committee. He started at a salary of $36,247 and received $37,300 in his second year.

Paul Chatfield worked for a few months in early 2017 for GOP freshman Rep. Sue Allor of Wolverine before moving on to caucus services. He made $40,000 his first year and $42,400 in his second year.

Allor said she met Paul Chatfield on the campaign trail and thought he’d be a good fit for her office. She said Rep. Lee Chatfield was not involved in his brother’s brief employment at her office.

“Everything was good. He just had another opportunity come his way,” Allor said of Paul Chatfield’s eventual move to caucus services.

When Miller and Lee Chatfield started in the House together in 2014, the freshmen lawmakers were in their mid-20s, had similar backgrounds and had pulled off underdog victories in their respective districts. Miller said he formed a friendship with Lee Chatfield and got to know his family. When a position opened in Miller's office, Aaron Chatfield was one of four to apply.

“There was no influence,” Miller said. “Aaron simply applied and was a good candidate.”

Senate rules prohibit senators from hiring employees within "the first degree of consanguinity" — a parent or child — or in "direct affinity" to any elected senator. Siblings, nieces, nephews or aunts and uncles of senators may be appointed with permission from the Senate majority leader.

With strict budgets for legislative offices and a large workload, representatives would be disinclined to hire a family member or spouse just for the sake of family, said Jack McHugh, senior legislative analyst for the Mackinac Center for Public Policy and a former legislative staffer.

That's not to say it doesn't happen, McHugh said, but there would be little incentive to hire a family member if they weren't going to put in an honest day's work.

House majority offices are allotted up to $104,000 annually for staff and other expenses, such as constituent mailings and phone bills, Simon said. House minority offices receive $101,000 annually. Pay to any one staffer within the office is limited to $60,000 a year, Simond said.

“They can’t use their allotment dollars without it going through our finance department,” Simon said.

Legislative aides and House staffers often put in a few years on the Legislature's staff before taking their experience to other public-sector work, nonprofits, unions or lobbying firms, McHugh said.

“If you’re interested in policy and politics, there’s no substitute for being in the belly of the beast,” he said. "...An increasing number of legislators in the era of term limits start out on legislative staffs."

A chief of staff in the House from 1995 to 2001, McHugh took his experience to the Mackinac Center, where he runs MichiganVotes.org, a website that compiles bill summaries, amendments and votes.