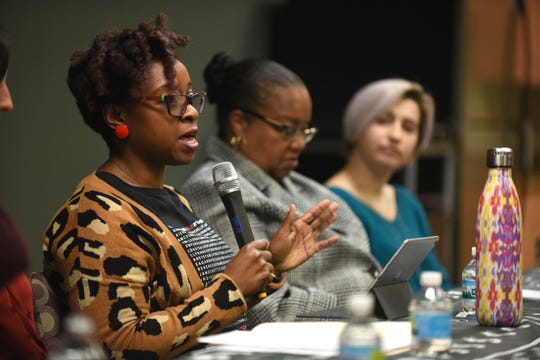 Imagine, she said, the football stadium at the University of Michigan, the largest college football venue in the country. Every Saturday during football season, the seats are full, or near full, with more than 100,000 fans.

"Picture each one of those seats being filled with a survivor of a rape kit that has not been tested. It’s enough to fill up the Big House four times," Worthy said, using the nickname of the UM football stadium.

Some of the Detroit rape kits processed over the past decade — some more than 45 years old — belonged to women of color in more than 85 percent of the cases, she said.

"That is travesty," Worthy said. "And people wonder why women don’t report and they are wondering why they feel like their case doesn’t matter ... I always knew in the criminal justice system, the lives of victims and survivors have much less value depending on as your skin gets darker."

Worthy was among panelists who spoke Wednesday at the MSU Detroit Center on “Resisting Sexual Violence through a Racial Justice Lens: Towards Inclusive Transformation.” 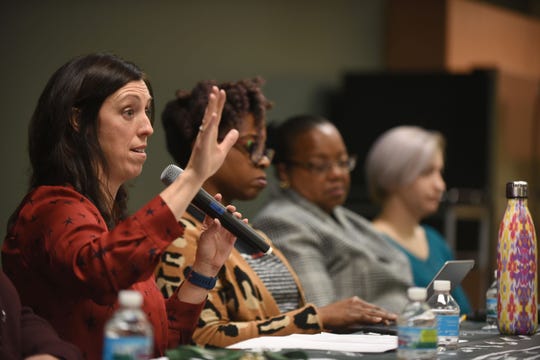 Danielle McGuire (from left), Wayne State; Tamara Butler, MSU Department of English, Kym Worthy, Prosecutor for Wayne County, and Amanda Thomashow were some of the panelist for the 'Resisting Sexual Violence through a Racial Justice Lens: Towards Inclusive Transformation' on Wednesday, February 20, 2018 in Detroit . (Photo: Max Ortiz, The Detroit News)

The event was sponsored by the Army of Survivors, a nonprofit organization, and the MSU Museum, as part of the "Sister Survivors Speak" series, leading to an April 16 opening of an exhibition on the crisis caused by serial pedophile Larry Nassar.

While the Nassar crisis has centered primarily on East Lansing, many said it was important to have a conversation about sexual assault in Detroit.

"Black lives matter," said Amanda Thomashow, campus coordinator for the Michigan Domestic and Sexual Violence Prevention and Treatment Board. "Black girls matter. So we have to talk about it."

In 2009, Worthy led the movement in Detroit to have the untested rape kits processed. She is regarded as a national voice in calling attention to the issue.

Others have joined Worthy, including actress Mariska Hargitay of the police drama series "Law & Order: Special Victims Unit." Hargitay has called for state laws to end the backlog of rape kits.

Last March, Wayne County announced they were nearing the end of the processing of the 11,000 rape kits. More than 830 suspected serial sex offenders were identified, she said.

Worthy said the offenders were those who sexually assaulted "more than one person ... just in one city, in one county, in one state."

"The way combat sexual violence, one of the biggest ways is to prosecute these kits, and to focus on the serial rapists," Worthy said.

Tamara Butler — an MSU assistant professor who's work focuses on 20th- and 21st-century black women's narratives and activism — said the conversation about sexual assault has been happening on college campuses.

"It's important to talk about the things that are happening in Detroit," said Butler. "I hope we can think about transformation and what we can do to stop sexual violence but also help people so we can move forward."

During the panel, Danielle L. McGuire, a historian of sexual and racial violence, said that black women and girls "consistently remained over time some of the most vulnerable people of crimes of sexual violence."

McGuire, an associate professor at Wayne State University, added that the focus should be on the most vulnerable in the fight to stop sexual violence.