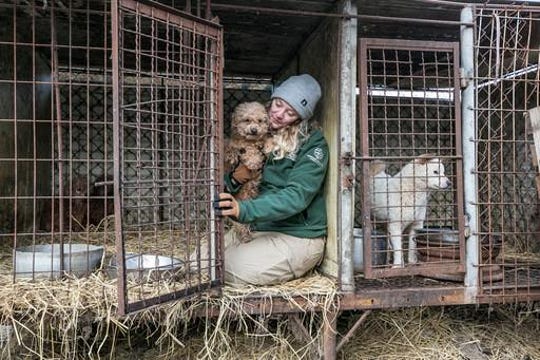 Five dogs rescued from the South Korean meat trade were adopted within hours Wednesday from the Humane Society of Midland County by Michigan residents.

The Humane Society received the five dogs on Tuesday night and after posting the rescue announcement on Facebook, thousands of inquiries poured in, said Beth Wellman, director of the Midland County shelter.

"Tons and tons and tons of people showed up, called and messaged on Facebook," Wellman said. "Lots of people were interested and couldn't wait to put in their bid for the dogs."

More than 50 families lined up to apply for the dogs Wednesday and in the end, five families were chosen.

One of the five dogs rescued from South Korea gets ready for adoption. (Photo: Courtesy of Humane Society of Midland County)

The International Society reached out to different rescues and shelters to assist in the transfer of dogs after they shut down their 14th dog-meat farm in South Korea.

The dogs were rescued from a breeding farm, which provided animals to meat industries as well as pet stores, Wellman said. The dogs had some various health issues but nothing contagious, she said.

"Even though they lived in horrific conditions and were very neglected, it was a nice surprise to see that they were super friendly when they arrived and weren't shy to newcomers," Wellman said.

Wellman said many residents were concerned the mission wouldn't allow the shelter to house enough animals within the county.

"We are the only shelter for Midland County and about half of our rescues are transferred in from other places that are endangered," she said. "We are a Humane Society US emergency partner and we have the space to do so."

The Midland Humane Society is run solely on donations, which can be made at www.hsomc.org or stop into 4371 E. Ashman St., Midland.