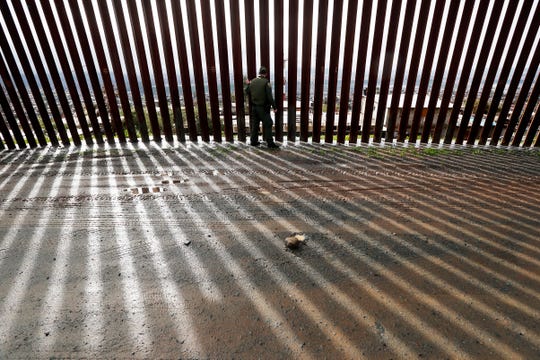 All seven Michigan House Democrats and Republican Rep. Justin Amash of Cascade Township co-sponsored the two-sentence measure by U.S. Rep. Joaquin Castro, D-Texas, which would next head to the Republican-controlled Senate for consideration.

The vote was 245-182, with 13 Republicans voting yes. In addition to Amash, Michigan GOP Rep. Fred Upton of St. Joseph voted in favor of the resolution, while the delegation's five other Republicans opposed it.

Trump pledged Friday to "100 percent" veto the House-initiated resolution if it passes both chambers, and it seemed unlikely Tuesday that lawmakers would have enough votes to override a veto.

"Beyond the fake emergency’s unconstitutional nature, it is disgraceful that the president would divert money away from military construction projects that are vital to the advancement of national security to fund a vanity wall for an extra applause line during his campaign rallies," Levin said.

"That is not what the American public wants to see. They want to see their president take action," McCarthy, a California Republican, told reporters at the Capitol.

"They want to see their Congress and Senate work together, but I guess this week is all about politics."

Upton, a moderate Republican, said the Constitution clearly calls for spending to be initiated by the Congress, and Trump's emergency order sets an "unfortunate precedent for the future."

"Our Founding Fathers believed in the principles of checks and balances, and it is our responsibility as members of Congress to maintain that authority — no matter who is president," Upton said.

"Strengthening our borders is an urgent necessity, but declaring a national emergency and reprogramming already appropriated funds without the approval of Congress is a violation of the Constitution."

The libertarian-leaning Amash, who represents the Grand Rapids area, was the only House Republican to have co-sponsored the resolution as of Tuesday afternoon.

Amash has argued that a president may not claim emergency powers for a non-emergency situation when Congress "doesn’t legislate the way he wants."

An emergency "does not elicit endless debate without consensus, nor is it addressed with a plan requiring years to execute," he said.

"The same congressional Republicans who joined me in blasting Pres. Obama’s executive overreach now cry out for a king to usurp legislative powers," Amash tweeted.

"If your faithfulness to the Constitution depends on which party controls the White House, then you are not faithful to it."

The same congressional Republicans who joined me in blasting Pres. Obama’s executive overreach now cry out for a king to usurp legislative powers. If your faithfulness to the Constitution depends on which party controls the White House, then you are not faithful to it.

Amash is not the only Republican to criticize Trump for declaring a national emergency to secure additional money for his wall.

On the other side of the rotunda, GOP Sens. Susan Collins of Maine and Thom Tillis of North Carolina have said they will oppose the emergency declaration. Republican Sen. Lisa Murkowski of Alaska has said she "probably" will, according to news reports.

"There is no intellectual honesty in now turning around and arguing that there’s an imaginary asterisk attached to executive overreach — that it’s acceptable for my party but not thy party."

Rep. Bill Huizenga, R-Zeeland, said he believes Trump has the legal authority to declare the emergency, noting that President Barack Obama issued 14 emergency declarations, including one about the H1N1 flu.

"The difference this time was, I got satisfactory answers from this administration about where and how they were going to fund this and their legal standing, versus what (Obama) did" using executive authority to create a program for the children of undocumented immigrants, Huizenga said.

Huizenga last month said he'd be concerned about Trump taking money away from the Department of Defense using emergency powers.

But he noted Tuesday the White House says it will turn last to the military construction money, after first using the funding drug interdiction and forfeiture funds — which the administration only has seven months to spend before the fiscal year ends Sept. 30.

If the White House does ultimately tap military construction projects, Trump officials have promised to "back fill" that spending in next year's budget, Huizenga said.

"I believe is within the within the lanes that Congress has laid out," he said.

"And we should maybe argue and maybe look at narrowing those lanes, which I would be all for as a constitutionalist who believes that Congress on both sides of the building have have abdicated a lot of their constitutional standing in this."

Freshman Rep. Elissa Slotkin, a former Pentagon official, also has raised concerns about diverting funds from the Defense budget for another purpose.

She said she has studied autocratic regimes in the Middle East during her career and how they use "national emergencies" to get what they want and contravene democracy.

"Effective leadership on tough issues doesn’t come through coercion, it comes through influence," said Slotkin, a Democrat from Holly.

"Our democratic system is one of compromise, and I have deep concerns about the president’s decision to break with historical precedent and bypass that system, and wield a national emergency declaration as a tool to make good on a political promise."

Effective leadership on tough issues doesn’t come through coercion, it comes through influence. Both sides came together in support of a deal that funds billions in border security, including additional technology and physical barriers along the border.

U.S. Sen. Gary Peters, a Bloomfield Township Democrat who sits on the Senate Armed Services and Homeland Security committees, said this month that an emergency proclamation by Trump sets a "very bad precedent" for a president to use "emergencies" to move money around in ways not authorized by Congress.

"The Constitution is clear in Article 1 that it's the Congress that appropriates money, and this could be mechanism that a president could use to circumvent those clear constitutional authorities," Peters said.

"It's certainly very interesting given the testimony we just heard from the intelligence agencies. All of the president's intelligence chiefs testified before the Senate as to threats to our national security, and the Southern border was not discussed at all by those officials."

Sen. Debbie Stabenow, D-Lansing, predicted legal challenges to Trump's authority to call a national emergency "on something he’s taken many weeks and months to talk about without calling an emergency."

"What is the one terrorist or bad event that you if you were president of the United States would let occur because you didn't act? Pick one. Because the answer is none. I support his decision to do this," said Bergman, who also sits on the Armed Services Committee.

"The bottom line is elected leadership at all levels needs to make sure they step up and quit playing schoolyard politics."