After a report of child abuse led to an investigation in January, troopers were able to review a video from May 2017 that allegedly showed Hubbard abusing his six-year-old son. 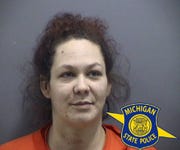 Police said Jingles did not protect her child from the abuse when she had Hubbard watch the boy weekly without supervision. Authorities said the two were a couple at the time the abuse occurred.

The child has been placed in foster care, officials said.