Chainsaw crews cleared fallen trees and wood debris on Sunday in Shiawassee County in areas hit by last week's tornadoes as most of the power was restored and county roads reopened.

Meanwhile, local officials met with the community to discuss recovery and the help available for those efforts as damage assessments continued over the weekend to determine the cost of the storm.

The tornadoes have taken a toll but the community is resilient, said Shiawassee County Sheriff's Deputy Dan McMaster.

"There are homeowners with tears in their eyes," he said. "This is a pretty strong community and tight-knit area, and everyone is coming together.

"There is a little sense of pride here and hopefully we are helping everybody."

The mobile home was lifted off its foundation and wrapped around a tree at the end of Westminster Drive N. in Mount Morris. According to officials, the trailer has been vacant for at least 1.5 years. Todd McInturf, The Detroit News
Fullscreen 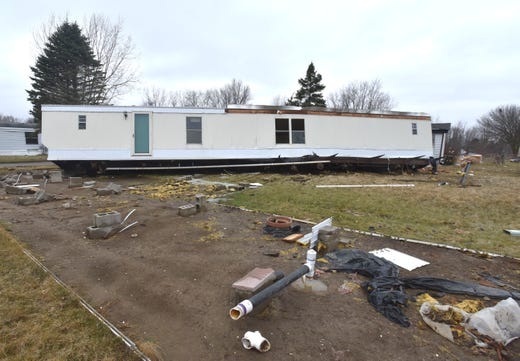 This mobile home at the at the Camelot Villa mobile home park in Mount Morris in Genesee County was lifted off its foundation. No injuries were reported. Todd McInturf, The Detroit News
Fullscreen 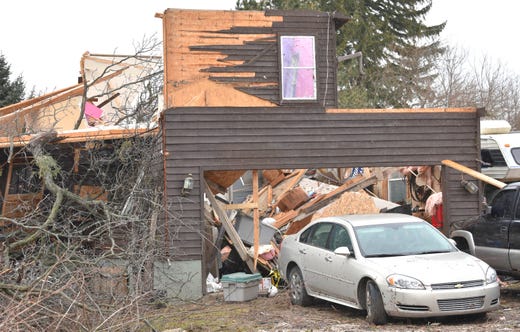 This house on the southeast corner of Bancroft and Newburg Roads in Vernon Twp. is heavily damaged from the storm. Todd McInturf, The Detroit News
Fullscreen 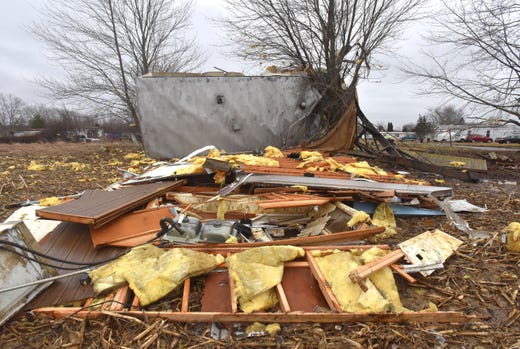 The wreckage of a mobile home in Mount Morris in Genesee County is seen Friday, after a tornado Thursday night lifted it off its foundation. Authorities say two tornadoes swept through mid-Michigan, damaging more than 60 homes and knocking out power to thousands. Todd McInturf, The Detroit News
Fullscreen

This tree was uprooted by the storm in Vernon Twp. Todd McInturf, The Detroit News
Fullscreen 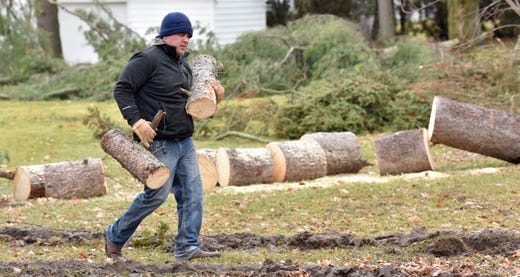 This man carries logs to a waiting truck as community members cut up trees in a yard along Newburg Rd. near Foundry Rd. in Vernon Twp. Todd McInturf, The Detroit News
Fullscreen 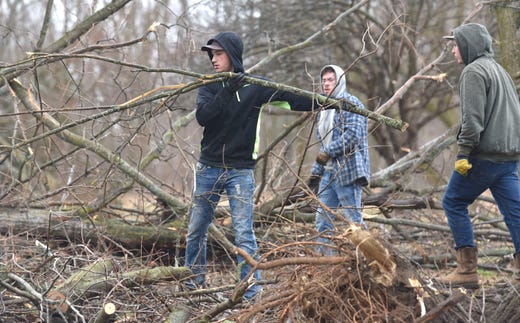 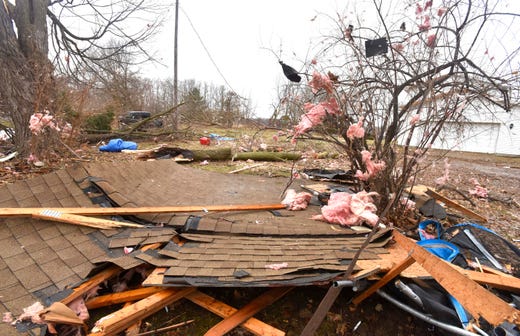 The collapsed roof of a house in Vernon Twp. is seen on the ground with insulation scattered in the trees.damaged by what is believed to have been straight-line winds, the weather service said. Four of the trailers were blown off their foundations, with one of the trailers, that has been vacant for at least a year-and-a-half, wrapped around a tree. Todd McInturf, The Detroit News
Fullscreen 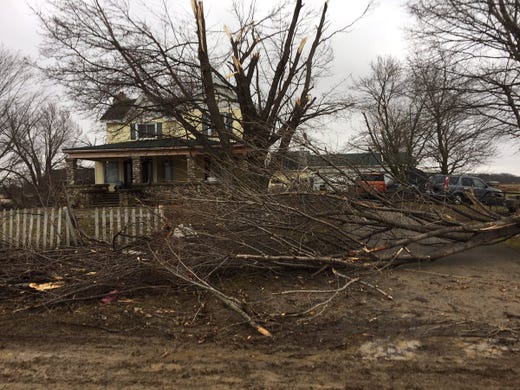 The funnel brought down siding, trees and windows in Vernon, Michigan. A block away, utility lines are dipping and dragging along the dirt roads. Beth LeBlanc / The Detroit News
Fullscreen 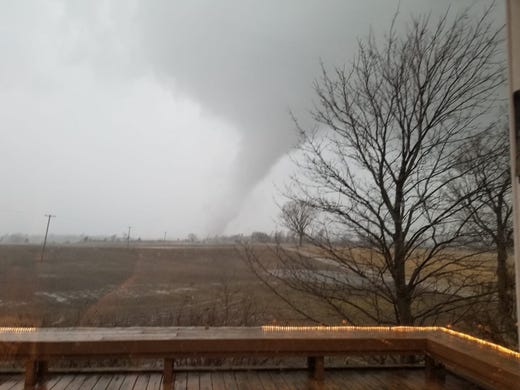 A resident of Durand, Michigan, took this shot of Newberry Rd. The storm appeared to travel just north of and parallel to Interstate 69, between Bancroft and Vernon, authorities said. Patricia Rothney
Fullscreen 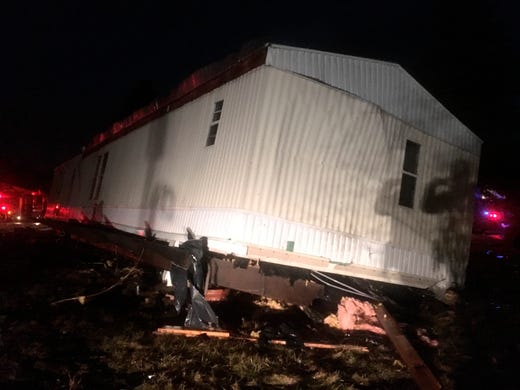 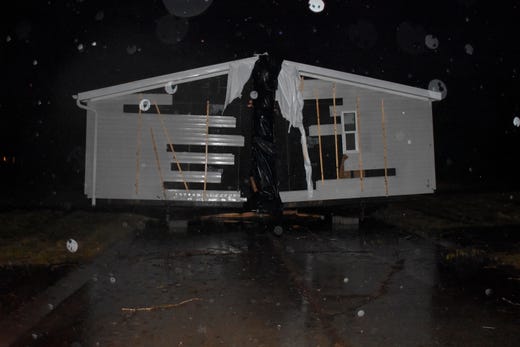 A mobile home is nearly torn in half by the tornado at Camelot Villas mobile home park in Genesee Township. Roberto Acosta, The Flint Journal via AP
Fullscreen 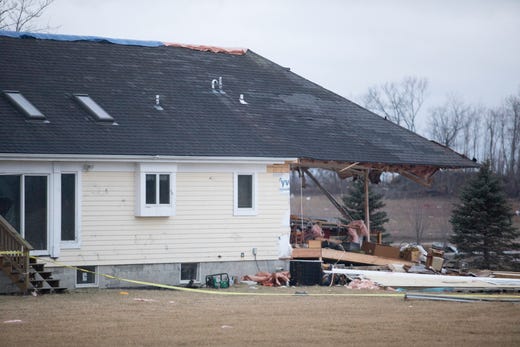 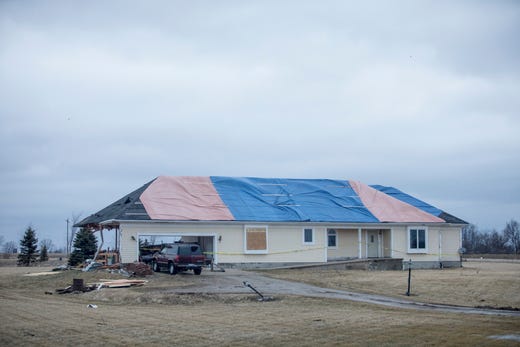 A damaged house off of Reed Road in Vernon is seen the morning after a tornado touched down. Kaiti Sullivan, The Flint Journal via AP
Fullscreen 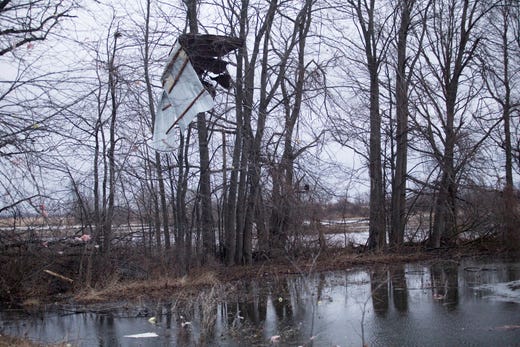 Debris hangs from trees off of Bennington Road in Vernon Friday morning. Kaiti Sullivan, The Flint Journal via AP
Fullscreen 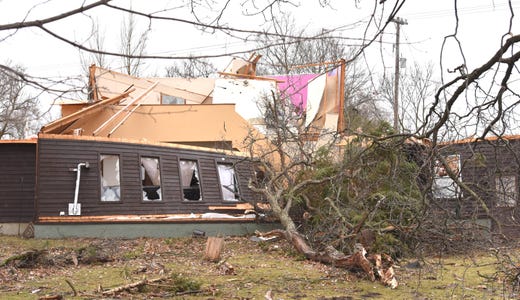 This house on the SE corner of Bancroft and Newburg Roads in Vernon Twp. is heavily damaged. Todd McInturf, The Detroit News
Fullscreen 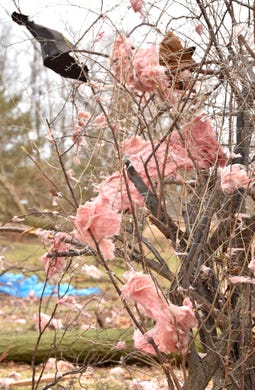 Insulation is scattered in the trees near a heavily-damaged house on the SE corner of Bancroft and Newburg Roads in Vernon Twp. Todd McInturf, The Detroit News
Fullscreen

This woman stacks up brush as family members and friends cut up trees in this yard along Newburg Rd. near Foundry Rd. in Vernon Twp. Todd McInturf, The Detroit News
Fullscreen 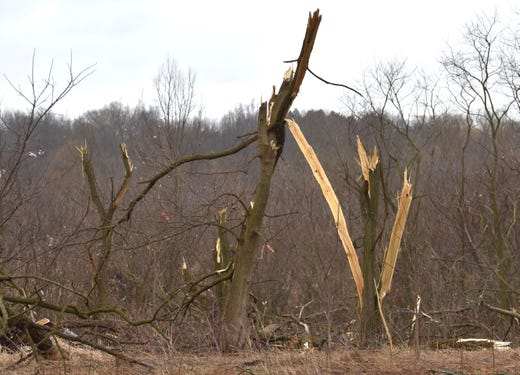 Some trees are snapped in half and other trees are whole along Newburg Rd. near Foundry Rd. in Vernon Twp. Todd McInturf, The Detroit News
Fullscreen 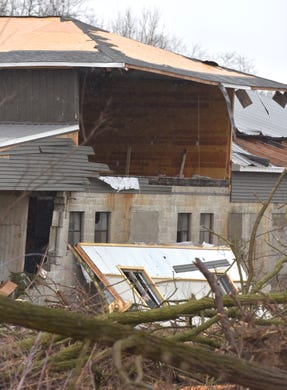 This wall lies on the ground at a former business along Newburg Rd. at Foundry Rd. in Vernon Twp. Todd McInturf, The Detroit News
Fullscreen 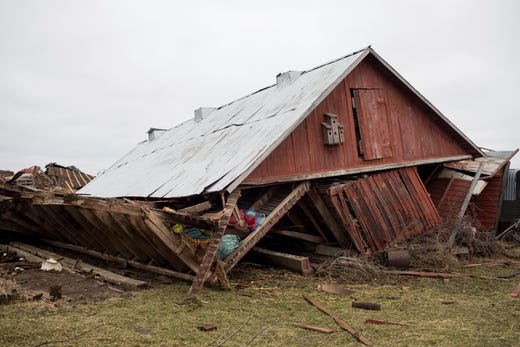 Debris lies on the ground near a barn after a tornado Friday in Vernon, Michigan. Authorities say a tornado swept through mid-Michigan, damaging homes and knocking out power to thousands. Kaiti Sullivan, The Flint Journal via AP
Fullscreen 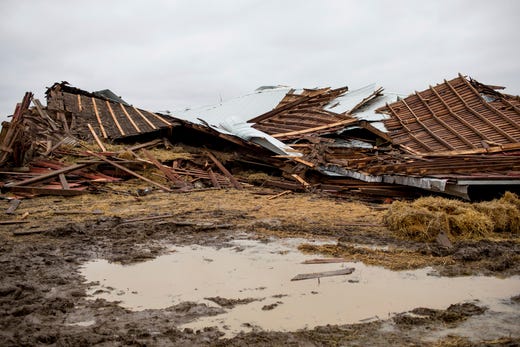 Debris lies on the ground after a barn was destroyed by a tornado Friday in Vernon. Kaiti Sullivan, AP
Fullscreen

Of the 70 homes affected by the storm, 14 are uninhabitable, said Shiawassee County Sheriff's Deputy Dan McMaster said Sunday. Twenty barns were lost and three businesses are a complete loss, he said. No fatalities or injuries were reported.

Work crews removed items Sunday around the Village of Vernon. Starting Monday, crews from the Shiawassee County Road Commission and the Owosso Department ofPublic Works will collect the wood and brush placed at the roadside.

On Friday, the Shiawassee County Sheriff’s Office and board of commissioners filed a local state of emergency declaration after tornadoes damaged homes.

Four tornadoes touched down as strong storms swept the state Thursday, according to the National Weather Service. 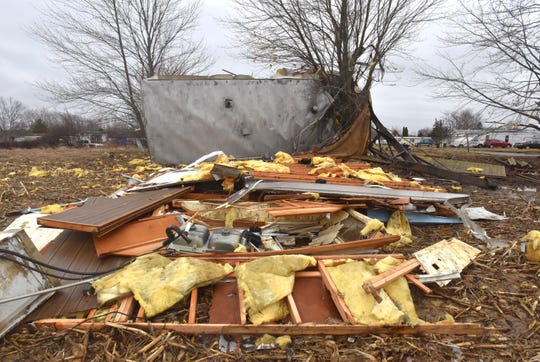 The wreckage of a mobile home in Mount Morris in Genesee County is seen Friday, after a tornado Thursday night lifted it off its foundation. Authorities say two tornadoes swept through mid-Michigan, damaging more than 60 homes and knocking out power to thousands. (Photo: Todd McInturf, The Detroit News)

The tornado recovery meeting Sunday afternoon drew more than 75 people at Durand High School in Durand, where officials discussed a tornado timeline as well as resources available to the community.

Officials including the county Clerk's Office and health department as well as representatives from Habitat for Humanity and the American Red Cross were part of the meeting, organizers said. Fifteen households signed up for help, McMaster said.

McMaster said officials still are assessing the damage and do not have a total financial impact yet. He said he expects that it will take at least two weeks to clean up the debris.

On Saturday, public safety officials opened a volunteer center and a phone bank for assistance. The number to call for assistance is (989) 743-2635.

Two tornadoes in Shiawassee County were found to be an EF-0 and EF-2, officials said Saturday.

The county board of commissioners, after declaring a local state of emergency, is asking Gov. Gretchen Whitmer for aid.

McMaster said the Michigan State Police is assisting in the recovery operations and damage assessments through the weekend.

The weaker of the two tornadoes touched down for seven minutes at 6:47 p.m. Thursday and created a path of damage 6.4 miles long and 100 yards wide from near Bennington to about 2 miles southwest of Corunna. It struck the intersection of Bennington Greens and Innsbrook drives, where it snapped and uprooted trees and hit a farm, lifting the roof off of an outbuilding, the National Weather Service said.

Officials said a second, stronger tornado touched down in Shiawassee County the same night near Vernon, traveling from the intersection of Newburg and Bancroft roads to M-71. With winds up to 125 mph, the tornado tore through buildings and knocked downed trees and power lines.

The board of commissioners has been in contact with Whitmer and the county's state Rep. Ben Frederick, who is in the county, McMaster said.

Dale George, spokesman for the Michigan State Police Emergency Management and Homeland Security Division, said usually a local government declares an emergency and asks for state assistance. In this case, though, George said they're evaluating if the county just needs assistance in cleanup or what further aid is needed.

"We sent up a helicopter yesterday for a damage assessment of the county," George said. "There is some additional information that is required before they can determine the state of emergency so that’s currently being assessed."

Residents can check the county's social media pages for announcements and resources.