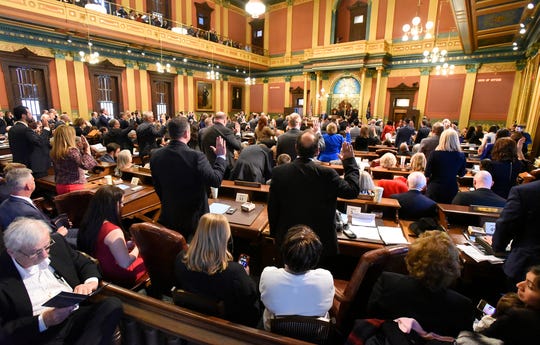 A package of bills that would make some expansions to public records access in the Legislature and governor’s office won bipartisan approval from the House Tuesday. (Photo: Rod Sanford, Special to The Detroit News)

Lansing — A package of bills that would expand access to some public records in the Legislature and governor’s office won bipartisan approval from the House Tuesday in a 107-0 vote.

The package backed by Gov. Gretchen Whitmer will head to the Republican-controlled Senate, where it faces an uncertain future as Republican leaders there have not endorsed the plan.

One bill among the 10-bill package was not voted on Tuesday but is expected to be approved by the House Wednesday. If passed, the bills wouldn't take effect until Jan. 1, 2020.

"We must remove these exemptions to make government more accountable to the hard-working taxpayers of our state," said Rep. Daire Rendon, R-Lake City.

The package would make the executive office subject to the Michigan Freedom of Information Act and create a new Legislative Open Records Act for lawmakers.

"We talk to a lot of people that really need to have some privacy while they’re discussing this issue," Rendon said.

Lawmakers have said exempting legislative records requests from judicial review was necessary because the Constitution’s speech and debate clause has allowed legislators in other states to avoid judicial review under FOIA. The clause provides legal immunity to lawmakers for legislative activities.

Despite the remaining loopholes, lawmakers have championed the legislation as the first step toward improving Michigan’s last-place ranking for government transparency and ethics, a title the state earned in 2015 from the Center for Public Integrity.

Michigan is one of two states that fully exempts the governor’s office from public records requests and one of eight states that exempts the Legislature. Whitmer voiced her support for the package last week.

"These bills are a first crucial step to increasing transparency in Lansing," Rep. Padma Kuppa, D-Troy, said on the House floor.

The Tuesday vote came a few days after the conclusion of Sunshine Week.

The package is similar to legislation introduced and passed by the House in the last two legislative sessions, but never supported by the Senate.

Senate Majority Leader Mike Shirkey, R-Clarklake, is reviewing public records expansions in other state and is interested in legislation that would expand public records access in the Legislature and governor's office, spokeswoman Amber McCann said.

"But he is not ready to endorse the House legislation," McCann said.

The bills would make public items such as a legislator’s calendar or a legislator’s communications with state departments regarding a constituent’s complaint, but they include many exemptions for both the Legislature and the governor's office.

The changes would include disclosure exemptions for the governor’s office related to appointments, the removal of a person from public office, a pardon or commutation, budget recommendations, messages or recommendations to the Legislature, and information that could threaten the security of the governor or lieutenant governor.

The Legislature would maintain exemptions for records related to communication of an “advisory nature” within and between public bodies, documents related to an ongoing internal or legislative investigation or ongoing litigation, trade secrets or financial records used to develop policy, records regarding security measures, records related to the majority and minority caucuses and the disclosure of documents that “would run counter to the public interest.”

The bills also would include a 15-day “ripening” period or holdover between when a record is created and when it could be released. A recent amendment to the bills would institute a 2-year retention policy for legislative records.