Despite ongoing legal reviews, some Michigan residents and companies can expect changes in pay and sick leave when two laws take effect on Friday. 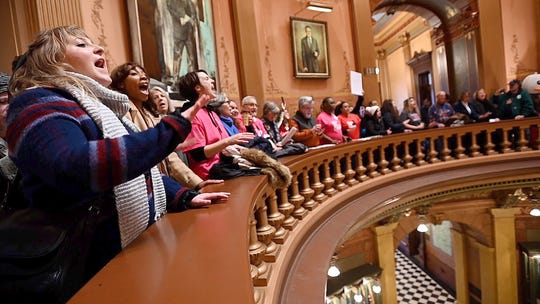 Chanting demonstrators jam the second floor of the Rotunda at the Capitol on Tuesday, Dec. 4, 2018, to protest legislation being considered in the "Lame Duck" sessions of the House and Senate. A controversial Senate bill, which would delay phase in of a $12 minimum wage for most workers and scrap plans to ensure equal pay for tipped workers, was passed by the House competitiveness committee Tuesday in the second week of the Legislature’s lame duck session. (Photo: Dale G. Young, The Detroit News)

Despite ongoing legal and judicial reviews, some Michigan residents and companies can expect changes in pay and sick leave when two controversial laws take effect on Friday.

The state's minimum wage will increase from $9.25 to $9.45 per hour, and businesses with more than 50 employees will be required to offer workers one hour of paid medical leave for every 35 hours worked.

The changes come as the legislative changes to both voter-initiated proposals are under review by both the Michigan Supreme Court and Attorney General Dana Nessel.

Nessel, who was asked to opine on the GOP-led Legislature’s “adopt and amend” strategy, will continue to review the decision, but spokeswoman Kelly Rossman-McKinney noted the Supreme Court’s review would take precedent.

The Supreme Court's involvement renders the case “akin to pending litigation — and the AG has traditionally refrained from opining on matters that are the subject of pending litigation,” Rossman-McKinney said.

The Republican-led House and Senate adopted resolutions last month asking the Michigan Supreme Court for an advisory opinion on whether lawmakers acted within their constitutional authority when they adopted and amended the minimum wage and paid sick leave laws during the same term.

The request came shortly after Democratic Sen. Stephanie Chang of Detroit asked for Nessel’s opinion on the same issue. Republicans said leapfrogging Nessel’s opinion for a Supreme Court ruling would avoid unnecessary delays and litigation that may arise if Nessel rules the Legislature’s action unconstitutional.

Republicans have maintained their actions were in line with the state Constitution when, rather than allowing the minimum wage and paid sick leave petitions to be placed on the ballot, they adopted the proposals and amended them so as not to overly burden Michigan businesses.

Organizers had collected hundreds of thousands of petition signatures to send the proposals to the Legislature, which has constitutional authority to adopt initiatives within 40 days or allow them to go to the ballot.

By exempting companies with fewer than 50 employees, the Legislature ensured the paid sick leave law will exempt more than 160,000 small businesses that collectively employ more than 1 million workers from a mandate that would have otherwise applied to every company in the state.

The paid sick leave initiative was a "mandate from the people," but the scaled-back version is "not what we wanted," said Danielle Atkinson, co-chairwoman of the MI Time to Care steering committee. The group is prepared to continue its fight into 2020 to attain the desired sick leave for all employees, she said.

"We’ve already taken steps to put it on the ballot in 2020," Atkinson said. "We’re hoping that the attorney general and Supreme Court recognize the way the amendments were made were unconstitutional and we don’t have to do that.”

The minimum wage steering committee Michigan One Fair Wage is "considering all options" as it grapples with the scaled-back pay increase set to take effect Friday, according to Alicia Renee Farris, chairwoman for committee.

“We are hopeful the Michigan Supreme Court will stand with Michigan workers and the more than 400,000 Michigan voters who signed the One Fair Wage petition," Farris said

The pending reviews have prompted input from the Legislature, business groups and ballot committees.

The Small Business for a Better Michigan Coalition, a group of manufacturing, restaurant, building, and farm associations, and the Michigan Chamber of Commerce called on Nessel to honor a prior opinion by former Attorney General Bill Schuette that ruled the Legislature’s “adopt and amend” strategy was legal. The group also asked Nessel to refrain from issuing an opinion while the issue was pending before the high court.

The group held off on further statements on the issue, noting that “any comments regarding Sen. Chang’s opinion request are premature.”

The request for a high court opinion is the first in nearly 40 years, according to GOP attorneys, who said the move was motivated by “an extraordinary circumstance” that could affect “virtually every employer and millions of employees throughout the state.”

The Michigan Supreme Court has not yet responded to the Legislature’s request and is not obligated to issue an opinion.

But doing so would “prevent an unnecessary waste of resources through certain and protracted litigation, while providing needed clarity to businesses and employees regarding the application of important laws,” attorneys for the Legislature said in a recent filing.

Chang’s request for a new opinion from Nessel “casts doubt on the status” of the laws “to the detriment of employers and their employees who depend on a stable and defined regulatory environment,” they said.

The Michigan One Fair Wage and MI Time to Care ballot committees are also asking the state Supreme Court to weigh in, but they’re asking justices to invalidate the amendments and allow implementation of the laws as they originally were designed.

For the first time since adoption of the 1963 Michigan Constitution, the Legislature “usurped the people’s” right to initiative by “brazenly” adopted to proposals “not because it agreed with them, but for the exclusive purpose of gutting them,” the ballot committees' attorneys argue.

If permitted by the court, the unprecedented adopt-and-amend strategy “heralds the end of the people’s 110-year-old constitutional right of statutory initiative in Michigan,” they wrote.

The Michigan Restaurant and Lodging Association, which urged lawmakers to amend the minimum wage initiative, is urging the Supreme Court to uphold the amendments.

A coalition of major business groups also backed the GOP move in a court filing, including the Michigan Chamber of Commerce, Michigan Manufacturers Association, Michigan Realtors Association and the West Michigan Policy Forum.

Employers are operating under the assumption the amended laws will take effect March 29, said restaurant association attorneys. If Nessel issues a contrary opinion prior to that date, “chaos will most certainly ensue, because neither employers nor employees will know what law applies to their wages and benefits.”