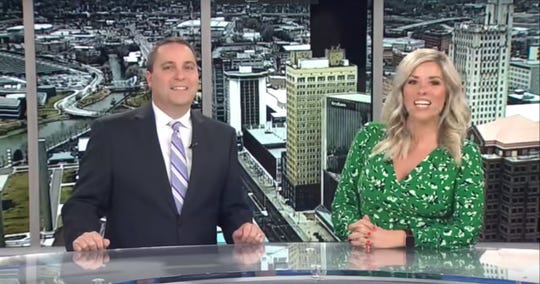 The WTOL newsroom published an online article explaining the awkward pitch for students, which they say was purposefully cringe-worthy. (Photo: YouTube)

Toledo news anchors are turning into memes overnight after they were very "extra" with their on-air segment during Ohio's state testing week.

WTOL-TV (Channel 11's) morning news team broke out all the slang it could Wednesday to try to speak to its younger audience and encourage them during a difficult testing week.

“YEEEET!” co-anchor Tim Miller follows up. “Stay woke, be on fleek and get that Gucci breakfast.”

We'll say no more. Get ready to cringe on what could be the best or worst of a corny news segment.

The news station dished the tea on the video made exclusively for students after it went viral online.

They said more than 800 students were absent during the Ohio state test last year and fear a third consecutive failing grade could lead to a state takeover of the district.

The goal was to encourage more students to show up and be ready for those tests, said Brian Lorenzen, WTOL general manager.

“The intent from the very beginning was to help TPS students take the tests and to get the district the funding it needs,” Lorenzen said. “This was one of several messages provided by area leaders and media outlets meant to show support and provide encouragement.”

The segment anchors said the video was admittedly cringe-worthy by design.

“It’s all about the kids and being relatable to them. We wanted to do something encouraging and fun,” said Steven Jackson, WTOL morning traffic anchor. “By doing this, not only are we empowering students, but we’re strengthening our community.”

For those out of the loop, here's a list of slang words mentioned and what they mean: