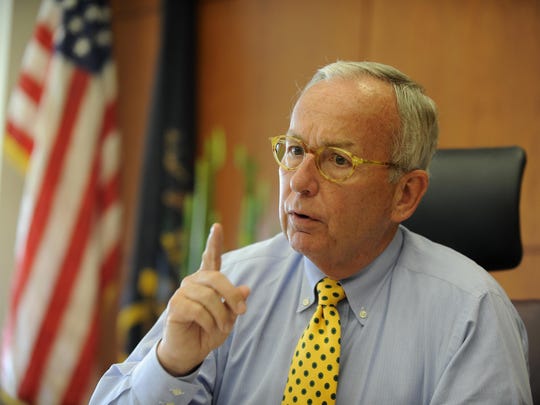 The hiring of a former state judge at Michigan State University has set off social media sniping, allegations that the attorney general is anti-Catholic and claims that the judge threatened the prosecutor’s office while representing the Diocese of Saginaw.

The issue has brought attention to the growing tension between not only Attorney General Dana Nessel and Republican lawmakers, but also the institutions Nessel is investigating for their handling of sexual abuse reports.

Talbot helped oversee the Diocese of Saginaw’s response to abuse allegations last year after a popular Catholic priest there was arraigned on sexual assault charges and the prosecutor's office formed an investigative team to review other potential clergy sexual abuse claims.

Talbot also is the chairman of an Archdiocese of Detroit review board tasked with internal reviews of sexual abuse complaints against priests and personnel, a process that is separate and secondary to law enforcement investigations.

Last year, when the Legislature was considering legislation responding to the sexual abuse scandal surrounding former MSU sports medicine doctor Larry Nassar, Talbot testified that laws that would extend the statute of limitations for sexual abuse complaints might overwhelm the Court of Claims system. Passing public policy that increases the court’s caseload without sufficient resources would be “a gross injustice to those who have already been victimized,” he said.

Nassar victim Amanda Thomashow retweeted the article about Talbot's new role and indicated in comments that, by hiring Talbot, the university was continuing to botch its responsibility to sexual assault victims.

Nessel, who has open investigations into both the Catholic Church and MSU’s handling of sexual abuse complaints, chimed in Sunday saying, “What Amanda said.”

GOP Rep. Beau LaFave of Iron Mountain responded to Nessel's comment via social media and a press release, accusing the Democratic attorney general of anti-Catholicism and demanding that she apologize for the comment.

Alleging a pattern of "religious bigotry," LaFave also cited Nessel’s controversial comments during a March press conference in which she encouraged clergy sexual abuse victims to ask to see investigators’ “badge and not their rosary.”

During the press conference, Nessel indicated that some victims interviewed in the attorney general's investigation of Michigan's seven dioceses had been approached in separate diocesan inquiries and offered settlements and non-disclosure agreements. Michigan’s dioceses have maintained they have cooperated and will continue to cooperate with the Attorney General’s office.

“What now has become clear is that there is a disgusting pattern of anti-Catholic discrimination emerging from our attorney general,” LaFave said in his statement.

Nessel spokeswoman Kelly Rossman-McKinney said she was “taken aback” by LaFave’s allegations, which didn’t appear to have “anything in there based on fact.”

“It was a powerful statement and it certainly rubbed some people the wrong way,” Rossman-McKinney said of Nessel’s rosary comment. But she also noted the office has heard from individuals who “applauded the attorney general for being so direct.”

Nessel’s office maintains her Sunday tweet stemmed from concern about Talbot’s role at MSU. She disclosed in a Tuesday press release that a grievance had been filed against Talbot last summer by the Saginaw County prosecutor. Grievances submitted to the Attorney Grievance Commission usually are kept confidential while they are under review.

The grievance had been brought to Nessel’s attention during her investigation into dioceses' handling of clergy sex abuse complaints, Rossman-McKinney said.

“Given our awareness of those concerns, we were stunned when MSU chose to put Mr. Talbot in a position overseeing Title IX,” Rossman-McKinney said.

Talbot maintains Nessel's characterization is “flat out false” and that the grievance was later dismissed.

Saginaw County Chief Assistant Prosecutor Mark Gaertner did not immediately return a call for comment. The Attorney Grievance Commission on Tuesday would not confirm or deny whether it received a grievance against Talbot.

Nessel’s office claims the Saginaw prosecutor’s office filed the grievance in July 2018, when the office alleged that Talbot’s behavior, “which included veiled threats and a demand to shut down the office’s investigation into clergy abuse in the diocese — was inappropriate and bordered on obstruction of justice.”

The grievance stemmed from a private meeting between the prosecutor and Talbot in which Talbot expressed concerns about a raid conducted on former Saginaw Bishop Joseph Cistone’s home, Talbot said. The former judge had been hired to handle the sexual abuse issues in the diocese because Cistone felt he couldn’t handle them while undergoing treatment for cancer.

Earlier that year, Cistone, who died in October, had just returned home from cancer treatment when Saginaw area law enforcement raided his home and “busted the door down with guns drawn,” Talbot said.

“I was not polite about it,” Talbot said of his conversation with the prosecutor. “I thought it was shameful, and they didn’t like the tone of my voice.”

But the former judge says his public comments on the matter stressed cooperation between the diocese and investigators. He said the conversation with the prosecutor took place after he had retired from the bench.

In a Tuesday statement, the Diocese of Saginaw said it was grateful for Talbot's service to the diocese.

"It is important to note that the grievance filed against Judge Talbot was quickly dismissed as being without merit by the State of Michigan’s Attorney Grievance Commission," said the Rev. Walter A. Hurley, apostolic administrator for the diocese.

Talbot said he was contacted in February by MSU acting general counsel Brian Quinn to help bring the university in compliance with a new ruling that requires the university to allow cross-examination of students who say they were sexually assaulted.

Talbot, who was appointed to the state Court of Appeals by Republican former Gov. John Engler, said the request did not come from former MSU Interim President Engler or former MSU General Counsel Bob Young, who had both left their positions by the beginning of February.

The university signed a short-term contract with Talbot in February to help develop a formal procedure for cross-examination in Title IX cases due to his "extensive background in working at nearly every level of the judicial process," said MSU spokeswoman Emily Guerrant.

"We did our due diligence in conducting the appropriate checks on Judge Talbot," she said.

Talbot said he will help the university start complying with the ruling “and then I’ll be getting out of the way.”

“All I’m being asked to do is what I’ve done for 40 years: Listen to both sides and make a decision,” he said.