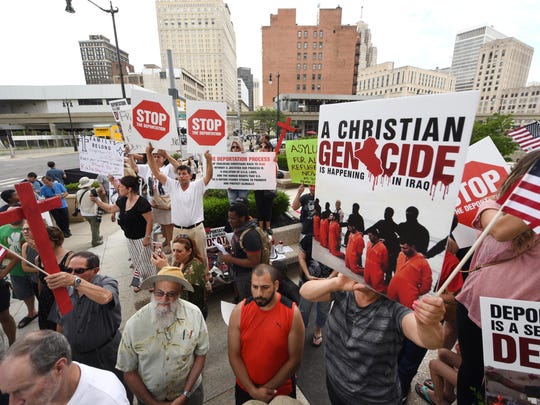 People carry signs protesting the deportation of Iraqi-American immigrants as members of the Chaldean community rallied at the McNamara Federal building in Detroit on Friday June 16, 2017. (Photo: Max Ortiz / The Detroit News)

The three-judge Sixth Circuit panel in December ruled that U.S. District Court Judge Mark Goldsmith lacked the authority to stop the deportations and grant bond hearings. The bond hearings resulted in the release of hundreds of detainees nationwide in November.

The latest ruling in the case Hamama v. Adducci brought by the American Civil Liberties Union in 2017 means some Iraqi detainees swept up in immigration raids that summer face deportation after April 9.

The ACLU said after an almost two-year fight, it had exhausted its options.

"We've taken every avenue of appeal and we're at the end of the road," said Bonsitu Kitaba, an ACLU attorney.

Some 1,400 detainees nationwide — 114 from Michigan — were swept up in the raids. Those who still remain in detention face deportation after April 9, as do those who were released but have yet to request an immigration hearing, or those who failed to convince a judge to allow them to seek an immigration, said Margo Schlanger, a University of Michigan law professor and assisting ACLU attorney.

"If Iraq is willing to take them back, they can now be removed," she said.

A majority of the detainees have filed for immigration hearings, Kitaba said; a "small amount" are in limbo.

In December, the three-judge panel of the Sixth Circuit reversed Goldsmith's orders relating to the detainees' removal and bond. That ruling was appealed by the ACLU, and on Tuesday, the court said it had concluded that "the issues raised in the petition were fully considered upon the original submission and decision of the cases."

The ruling means Goldsmith’s decisions on July 2017 preventing removal of Iraqi nationals with final removal orders and a January 2018 order that led to bond hearings are no longer in effect in seven days, Schlanger said.

It's uncertain, however, if Iraq will accept the detainees.

"Iraq’s position on removals is unclear, but we know that the administration is putting tremendous pressure on Iraq to take people back," said Nadine Kalasho, an attorney with Code Legal Aid, a nonprofit legal advocacy group.

The ruling is the latest development in Hamama, a nationwide class-action lawsuit filed in June 2017 on behalf of the detainees, who were arrested throughout the country without warning and threatened with immediate deportation, though many came here as children and have lived and worked in the U.S. for decades, the ACLU said.

Some Iraqi nationals rounded up were released after 19 months in detention based on the ruling by Goldsmith, who said Immigration and Customs Enforcement could not indefinitely detain foreign nationals while ICE sought to deport the detainees.

"Goldsmith put a pause on their removal so they would have time to go into immigration court and reopen their cases and he said they couldn't be held without individualized bond hearings," said Schlanger. "Goldsmith said everyone had to get released once they were held for more than six months because it was unlikely Iraq was going to take them at all, that order is unaffected by what happened today."

“This decision is a decisive victory further vindicating ICE’s efforts to remove these aliens, many of whom had criminal convictions, to Iraq," she said in a statement Wednesday. "The court's decision again affirms that each individual fully litigated their cases, receiving exhaustive due process. ICE is now reviewing this decision to determine its next steps.”

Schlanger said an unknown number of class members still in detention under six months are in danger of being removed if they haven't sought out an individual stay request.

"... They need to be fighting hard," she said. "Nobody should be thinking that Iraq is saying no to everybody. They have taken people back in small numbers."

The civil liberties organization argued that if the detainees were repatriated to Iraq, they would face torture or death for their Christian faith or for having served in the U.S. military.

The ACLU is considering an emergency motion, which they say is highly unlikely to be granted.

The ACLU and Code Legal Aid are encouraging those who have not opened their immigration stay cases in court to do so or risk being removed.

"People should be preparing to reopen their cases if they haven't and if they haven't succeeded in reopening their cases, they should know they are at risk and seek an individual immediate stay from immigration court or Court of Appeals," Schlanger said.

Some released detainees and their families are worried and confused.

Ashourina Slewo's father was released in March 2018 from the Northeast Ohio Correctional Center but said there's great fear even after his motion was granted last summer. Slewo's case won't be heard until his immigration hearing in January 2021.

"This is a nightmare," said Slewo of Madison Heights. "We've been fighting so hard to bring our people home, and with one decision, the Sixth Circuit can just undo everything. We just can't catch a break. Detaining these people isn't going to help anyone. Deporting them would be sentencing them to death. I hope the judges are prepared to have that on their conscience."

Slewo said nothing will make up for time lost with her father.

"It's difficult to talk about this, but we do," she said. "We have to be very honest about the fact that this may all lead to my dad being deported. My dad tries to act brave for our sake, but I know this is taking a toll on him."